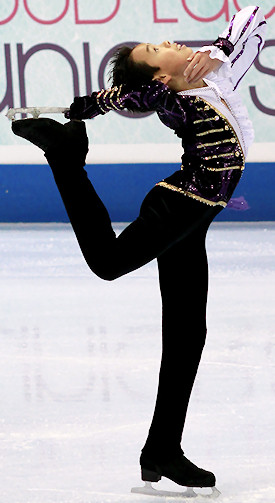 The 2011 Canadian Figure Skating Championships in Victoria, B.C., in January were quite a thrill ride for the competitors and audience alike. Patrick Chan earned his fourth consecutive title with one of the highest scores ever seen at the championships, and landed three quadruple jumps along the way. The 2006 ladies champion Cynthia Phaneuf was finally able to overcome all of the adversity that she has faced in the past seven years, and won her second title in convincing fashion. Two new champions—ice dancers Vanessa Crone and Paul Poirier and the pairs team of Kirsten Moore-Towers and Dylan Moscovitch brought a hint of change to the competition as the new Olympic cycle began. However, it was a tiny twelve year-old from Burnaby, B.C., who may have stolen the show from them all.

Nam Nguyen, who stands just four feet eleven inches tall, won the junior men’s title by nearly twenty-five points over his nearest competition. The title—his fourth in five seasons, was just another mark in the record books for the wunderkind.

“Happy was probably the right word to express my feelings at that time,” Nguyen said of his win. “It was especially exciting knowing that I am the youngest to ever win the junior men’s title in Canada. To be the Canadian junior men’s champion is really amazing to me because it showed that my hard work and dedication to this sport has paid off.”

Nguyen won his first title—the juvenile boy’s title at the 2007 Canadian Junior National Championships at the tender age of eight. He followed that up with the pre-novice title the following season, and then took the novice title in 2009. Each time he earned a title, he became the youngest in his country to do so.

“When I won the juvenile title, it was special to me because it was my first national competition and I was the youngest skater to compete in the group,” Nguyen said enthusiastically. “No one thought that an eight year-old boy could defeat the 13 year-olds twice his size to win the title, but nothing is impossible.”

The junior men’s title came a year after Nguyen took a brief hiatus from the top step of the podium. In 2010, he was the junior men’s bronze medalist, and he used every bit of that experience to propel him to the title this season.

“I learned a big lesson from competing last year, which was learning how to handle pressure,” Nguyen said thoughtfully. “There is a lot of pressure as a returning medalist, but I did not allow myself to think negatively. I just wanted to show everyone that I developed my skating style and added more speed and power over the past year. I also wanted to entertain the audience during both of my routines as much as I could. But I felt really confident because I trained really hard with a lot of support from my family and friends.”

With a short program to Michael Jackson’s Smooth Criminal and a classical free skate to Beethoven’s Piano Concerto No. 4 in G major, Nguyen demonstrated that he has become a versatile skater in terms of style. He credits his years of piano and ballet lessons for his ability to connect with different types of music and choreography at such an early age.

“The technique that I learned from piano lessons gave me the ability to listen to and empower the tiniest notes in every piece of music, and I try to bring that out in my skating,” he revealed. “I’ve trained in ballet since I was six, and I have been taught to pay close attention to the movements of my body and face and how they directly relate to the music. I have applied this to my skating routines because I want them to look nice and perfect, and I specifically want the audience to be happy with what I have performed for them.”

Nguyen has been gifted with the opportunity to strut his stuff for the whole world to see on two separate occasions. In 2009 at the Four Continents Championships in Vancouver, B.C., Nguyen was invited to skate a program in the exhibition of champions.

“The invitation letter came in middle of January, a few weeks after I won the novice men’s title at the 2009 Skate Canada Western Challenge Championships,” Nguyen recalled. “I was ten years-old during this event, and I had the chance to meet many great skaters coming from other countries. They were so nice and awesome.”

Nguyen was also invited to skate in the exhibition at the 2010 Olympic Games, and was introduced by men’s champion Evan Lysacek.

“I know for a fact that not a lot of kids like me get to be introduced by Evan Lysacek. So, this is very special and amazing for my skating,” Nguyen said enthusiastically. “The Olympics were in my hometown, and being selected to perform as a soloist in the exhibition was an honor for (me) and my family. I was very happy and felt so grateful to represent the youth of the province of British Columbia.”

Originally drawn to the ice by the lure of hockey at the age of five, Nguyen started taking figure skating lessons at six in order to improve his on-ice speed.

“I joined Junior Academy lessons at the Connaught Figure Skating Club in Richmond, B.C., and I fell in love with the sport,” he said. “I asked my parents if I could continue taking lessons and they said ‘yes’. I gave up hockey when I won my first national title in order to focus more on skating.”

Nguyen trains at the BC Centre of Excellence in Burnaby with famed coach Joanne McLeod who is not only responsible for his technical training, but for his choreography as well. He balances his four hours at the rink each Monday through Friday with the five hours of school that he attends.

“Each day I have two hour long sessions on ice that includes either a 15 minute spin patch or a 30 minute group enhancement,” Nguyen explained. “I also do one hour of off ice training in dance, yoga, or cardio. On Saturdays I have a one-hour free skate, and Sunday is my day off. After skating, I go home and eat dinner, and make sure that my homework is done before my bedtime. ”

Even with all of his accomplishments, Nguyen has no intentions of resting on his laurels in the off-season. In fact, the pint-sized champ uses his successes as motivation to work even harder.

“I took one week off after competition to recover and enjoy my victory. Since coming back to training, I have learned a new exhibition program to Michael Jackson’s music Smile and Don’t Stop ’till You Get Enough,” he explained. “I am trying to learn the triple axel for next season, and I have working on it since last April. After I learn that, I might start to practice the quadruple Salchow because I feel ready to learn that jump.”

But Nguyen realizes that new jumps alone are not the key to moving ahead in his skating, and is focused on improving other aspects as well as he prepares to make his senior debut next season.

“The goals for next season are to increase my speed by using deeper edges plus having transitions into my skating and to improve my spins with more power,” he said confidently. “I also want to make the landings of all my triple combinations more consistent and have more speed in and out of them.”

All of these improvements of course are meant to take Nguyen’s skating to the next level, and he is very clear about what he plans to achieve in the sport.

“I turn 13 this May, and I might have a chance to compete at the Junior Grand Prix circuit next season,” he said. “I’m very excited because I’ve been waiting very long time for this opportunity and now I want to show the world that I’m ready to take them on. But in order to earn that chance, I have to train really hard to meet the requirements from Skate Canada, and prove that I am able to represent Canada in the Junior Grand Prix.”

Nguyen’s goals, however, are a bit more ambitious than just competing on the Junior Grand Prix circuit

“My long-term goal is to represent Canada in competition in the years 2014 to 2018 at the World Championships and Olympic Winter Games,” Nguyen said convincingly.

In the meantime Nguyen is busy performing throughout British Columbia in exhibitions, and has accepted invitations that will keep him busy until May.

“In early March I was invited to perform for Carnival at the Little Giants Figure Skating Club in Chetwynd,” said the popular skater. “I also skated in an exhibition at the Arrowsmith Skating Club in Port Alberni last week. On April 10th I will perform in another show at the Mile 300 Figure Skating Club in Fort Nelson. I will also participate in the ‘2011 Champions on Ice’ gala of the Canlan Ice Sports, BC Centre of Excellence and British Columbia/Yukon Territory section on May 6th and 7th. This will conclude ice show opportunities for me, and then I’m going to focus on training for my first competition on in the middle of July for the new coming season.”

The newly crowned champion is very close to his Vietnamese-Canadian family, and he enjoys spending time with them. Along with his parents, Nguyen lives with his six year-old sister Kim, who is also a budding figure skater.

“She is in grade one in the same school as me,” Nguyen said of his sister who has been skating for two years. “Her signature jump is the Axel, and one of her biggest challenges is to beat my record in figure skating someday. Kim is landing the double Salchow and is now learning the other double jumps. I think that her talent in figure skating is much better than mine. She also participated in a group performance during the exhibition of the Olympics as a little girl skating in the first number named ‘A Child Dreams of Becoming a Champion’ in the second half the show.”

Nguyen also has an older sister, 28 year-old Nhien who is a graduate of Trent University, and lives in Ottawa, Ont.

When he has time to spare, Nguyen likes to play BeyBlades—a line of high-performance spinning tops, with his sister, and also likes to hang out with his friends and family. He is also a fan of the film Journey to the Center of the Earth.

“It’s a science fiction movie and I love science,” he admitted. “It’s packed with lots of action, and that makes me excited to watch.”