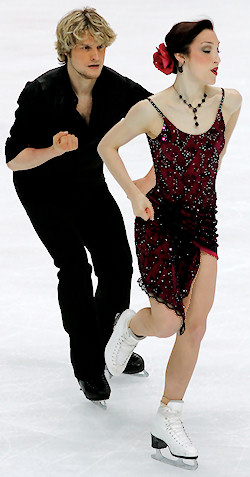 History was made for the Ice Dancing event at the 2011 ISU World Figure Skating Championships when Meryl Davis and Charlie White became the first U.S. American dancers to win the title. It was also the first North American podium sweep in dance with Tessa Virtue and Scott Moir (CAN) and Maia Shibutani and Alex Shibutani (USA) taking silver and bronze. All three teams train under Marina Zueva and Igor Shpilband in Detroit.

Davis and White delivered a passionate Tango routine and earned all level fours for the lifts, the spin, and the circular footwork. The team crowned their successful season with the world title.

“We couldn’t be any happier,” said White. “We’ve worked our entire life for this moment. It’s never been easy. We put an extra effort when it got hard and it’s just such a blessing and it paid off when it counts here at Worlds.”

“We were ready mentally and physically to be able to perform when it counted and we are so proud of each other,” he continued. “It’s really a dream come true for us. I think that was probably the best skate we’ve ever had in our career.”

“There were so many other amazing (American dance) teams we’ve looked up to over the years, and to be the first to win this title means the World to us,” Davis commented.

Virtue and Moir had chosen a Latin program, and Virtue even dyed her hair darker and sported a ponytail. The Olympic Champions completed innovative lifts and had one level four element less than Davis and White. The Canadians scored 107.50 points. Overall, they accumulated 181.79 points and came second.

“We are really happy with the way we skated,” Moir offered. “That’s a really demanding program, really tough, and we thought we skated really well. We are really proud of this silver medal. We are really excited for all our training mates: Maia Shibutani and Alex Shibutani and Meryl Davis and Charlie White, and train with them all the year. We know how they work, they deserve it. But for us… We really will celebrate this silver medal. It’s really special. As we said yesterday, it’s a first competition we felt we came and did everything we wanted, so we are really proud and are going to hold our head up high.”

“I think I was a little bit sloppy at the end,” added Virtue. “We were a little tired, but we were really in the moment and skated each step 100%, which was exactly what we wanted to do.”

While Davis/White and Virtue/Moir were the favorites for gold and silver, the bronze for the Shibutani siblings came unexpected. The young skaters delivered a flawless performance to Smile and Let’s Face the Music. Their elements were smooth and confident, earning them level fours for the lifts and twizzles. Both step sequences were awarded a level three.

“We’re just speechless,” said Maia. “Going into our first World Championships, we were really looking forward to just enjoying the experience and showing all the hard work we have put in this year. We’re just happy having two solid performances, so this result (bronze medal) is amazing.”

“I’m just shocked,” added Alex. “There’s an amazing caliber of skaters in this particular competition, and for us to be where we are… It’s been a long year for everyone. We’re proud of each other and how we skated in our first year at the senior level.”

Nathalie Pechalat and Fabian Bourzat of France were poised for bronze after the short dance, but a fall ended their dream of a medal. Their blades clicked together and Bourzat took his partner down with him just on the entry into their circular footwork. The step sequence was only a level one, and even though the other elements were well done, it was not enough to hold on to the bronze. The European Champions finished fourth as they had last year.

“I don’t know what happened,” said Pechalat. “We trained here for two years, we know this ice, it is very good. Fabian made a mistake, but now I am afraid that the (Russian Figure Skating) Federation will not allow us to train here. I like Moscow so much I don’t want to leave. After the fall, we knew we had to stay focused. Now we have to digest what happened. We will move on and work on a new program.”

“It is not the end of the world,” added Bourzat, “but it is a big disappointment for us. This was a program we felt comfortable with all season. It was mostly an error on my part. We were serene and confident when we went out. We’ve done good programs all season and if there were errors, they happened on the twizzles or the spin.”

Kaitlyn Weaver and Andrew Poje of Canada gave a dynamic performance to Moulin Rouge that was highlighted by spectacular lifts and moved up to fifth.

“We’ve had some many flukes this season – a fluke in grabbing a foot or a fluke in costumes,” shared Weaver. “We were so ready to get over that. We’re so proud of all places to do it right – this is the place to do it. Last time we were at Worlds we were 17th, so this is a long way. To realize that we are among the best teams in the world is great.”

“The best part was the fact that it was a great performance for us putting down two solid performances,” Poje commented. “We had a habit of having one great and one mediocre performance in our previous competitions this season, so we wanted to make sure that we put both programs out and that were here to compete and not hold back. We’re gaining experience in high pressure situations.”

The two Russian dance teams didn’t fulfill the high expectations. Both were a little shaky although they didn’t make major errors. Ekaterina Bobrova and Dmitri Soloviev placed sixth, while Elena Ilinykh and Nikita Katsalapov were seventh.

“This was a very difficult season, because of many facts,” Bobrova announced. “We wanted to be in the top three. We tried our best on the rink tonight, but the Canadians and Americans are obviously better now. We will pull ourselves together and prepare for the next season as well as we can.”

Ilinykh and Katsalapov were a little thrown off at the start when the crowd cheered too loudly that they didn’t hear their music.

“We didn’t know what to do, if we should continue or start again,” admitted Ilinykh.

“The short dance yesterday went well,” observed Katsalapov. “As for the free dance, not everything went as planned. Maybe the support of the crowd was distracting, maybe it was just nerves. Yesterday it was easier. Today, the audience was more excited. Now our plans are to rest a few weeks and then we’ll start to work. Next season we want to rock.”