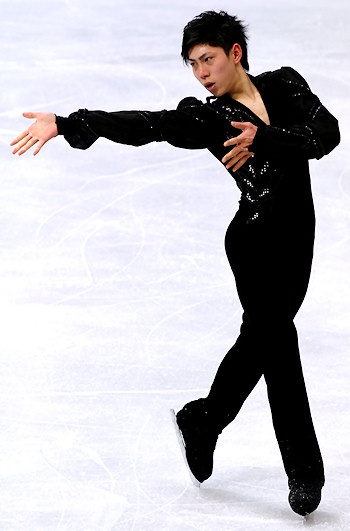 Japan's Keiji Tanaka performs his long program to The Bolt by Dmitri Shostakovich at the 2011 World Junior Figure Skating Championships.

Tanaka didn’t qualify for the Junior Grand Prix Final in the past season as he finished third and sixth in his events, however, he proved at Junior Worlds that he is the current top junior man from Japan. He skated well in the qualifying round, the short, and free program to claim silver in what was his debut at the Junior World Figure Skating Championships.

“My free skating was a great experience for me,” said Tanaka.

“I came in sixth in the short program and I actually didn’t think too much about my position,” recalled Tanaka. “I just wanted to skate well in the free skating and I focused on that.”

The now 17-year-old started, like many others, just by chance with skating, as an ice rink was located not far from his home.

“I went skating with my mother and I practiced with her doing back crossovers,” Tanaka remembered.

There are no other skaters in his family, however, his dad practiced kung fu for three years.

Takahashi, the first Japanese male skater to win Worlds and an Olympic medal, is Tanaka’s idol in the sport.

“I admire his footwork and his fighting abilities,” Tanaka elaborated.

Tanaka is also working with Takahashi’s coach Utako Nagamitsu. He likes learning a new jump most of all.

“My next motivation is to include the quad toe,” the athlete said.

He has been landing it in practice and wants to show it on the Junior Grand Prix (JGP) circuit.

However, there have been ups and downs.

“On some days, the jumps work and on others they don’t,” the Japanese admitted. “For me it’s all or nothing.”

Indeed, the 2011 Japanese National Championships were such a black day where nothing worked and Tanaka finished a distant 11th .

“I don’t know what went wrong there,” he said, “but I was able to come back strong and I am thankful that the Japanese Federation still gave me the chance to compete at Junior Worlds after this.”

Tanaka trains in Osaka and Kurashiki under Nagamitsu and Yusuke Hayashi and says that his practice conditions have improved significantly in the past two years when the school bought the old ice rink. He goes to school for two to three hours and then trains for two and a half hours.

Competing at Junior Worlds was an important experience for the teenager.

“I was able to watch top skaters which gave me additional motivation,” he noted. “In 2012, I want to come back and take the title.”

And he has a game plan for this goal: “I want to improve not only my jumps, but also other aspects of my skating.”

Tanaka has prepared a new free skate to The Untouchables by Ennio Morricone for the new season. The choreography was done by Kenji Miyamoto. He is keeping the Violentango short program from the past season.

Tanaka is currently scheduled to compete at the JGPs in Brisbane, Australia (Sep 7-11) and Innsbruck, Austria (Sep 28 – Oct 2).

The Japanese skater has planned his future in detail.

Tanaka sees his strong point in the consistency of his jumps and his weakness in his spins. He describes himself as “very shy”. Off the ice he enjoys watching action movies.

Asked which three things he would take on an isolated island, Tanaka revealed a very practical character: “I’d take a ferry so I always could leave, fire, and food. And when I’ve eaten the food, I’d return home!”