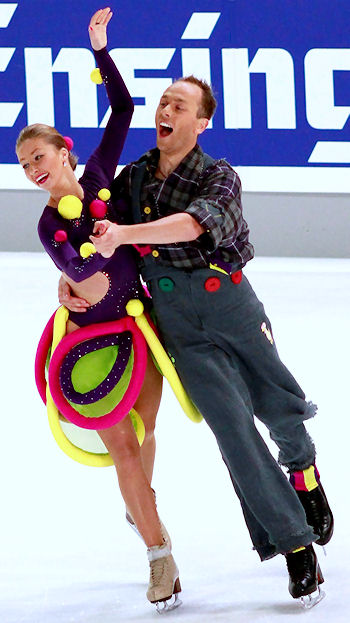 Sometimes disappointment is very hard to deal with, but in the end, it can make you stronger. This is certainly true for German ice dancers Nelli Zhiganshina, 24, and Alexander Gazsi, 26.

The 2007 German Champions almost quit when they lost to Carolina and Daniel Hermann at the 2009 German Nationals in what was a highly disputed decision. The dancers and many observers, including the German press, felt that the result was unfair and the German Skating Federation didn’t support Zhiganshina and Gazsi anymore as they were ineligible for the Olympic Games.

Zhiganshina and Gazsi took a break and started to work with circus acrobats in Moscow to prepare for a potential show career before they decided to give it another shot. They moved back to Germany following four years of training in Russia under Elena Kustarova and Alexander Zhulin, and began to work with Rostislav Sinicyn and Martin Skotnicky in Oberstdorf.

The couple started late into the next season and had no chance to qualify for the 2010 Olympic Winter Games as the Russian-born Zhiganshina did not have German citizenship. They finished third at 2010 Nationals.

Even then, Zhiganshina and Gazsi announced that they were not ready to give up and that their goal was to compete at the 2014 Olympic Winter Games in Sochi. They are committed to this goal and this year they surprised quite a few people with their results.

It was not a big surprise that Zhiganshina and Gazsi recaptured their National title as the 2010 Olympians Christina and William Beier had retired and rivals Carolina and Daniel Hermann were sitting out the season recovering from injuries. But then Zhiganshina and Gazsi drew attention when they finished seventh at the 2011 European Figure Skating Championships in Bern, Switzerland. In their only previous appearance at Europeans in 2007, they were ranked 16th.

“I guess the judges had forgotten about us and when they saw us in the preliminary round,” Gazsi joked. “They thought ‘oh, this is a nice new couple’.”

They are the first German dance team to crack the top ten at Europeans since Kati Winkler and René Lohse retired in 2004.

“Obviously our results this year motivate us a lot,” said Zhiganshina. “We want to work even harder so that we can show more and improve further.” “The season went really well for us, and our placement at Worlds was a nice ending,” agreed Gazsi. “We are happy that we weren’t sick or injured last season and we hope that it will be the same for the next season as this is the basis for everything. We’ve worked a lot for these results and now we have to follow up and do even more.”

Coach Rostislav Sinicyn is very pleased with what his students have achieved so far.

“We have been working together for almost two years, and I think we found a way to make them look different from everyone else,” he elaborated. “In my opinion, they have a look of their own. They set themselves apart with their good technique and the quality of the elements. This is reflected in their technical score.”

“We have to work on the second mark and there was a little problem with that, it was their weaker side,” Sinicyn continued. “But we have been trying to correct this by using a program with a meaning. The program has a inner content that is understandable for the spectators and judges. This is actually their distinctive trait. I think not many couples are able to communicate as well the state of mind, to be actors on the ice, and to combine this with technique.”

Zhiganshina and Gazsi had a short break after Worlds and started their preparations at the end of May. Then they went to Bulgaria in early June to work with their choreographer, two-time ice dance World Champion Maxim Staviski, who was assisted by his partner Albena Denkova.

“Our programs this year are different from last year,” Zhiganshina explained. “We want to show a different side of our skating and our coaches are very happy with the programs.”

The German Champions picked Romeo and Juliet, using the soundtrack from the 1996 movie, and a Rhumba and Mambo for the Short Dance.

“We didn’t want to do something funny again,” stressed Gazsi, who came up with the theme for the free dance. “I suggested Romeo and Juliet at the beginning of the (past) season, but at first the coaches didn’t agree as they felt it was overused. Eventually we decided to use it and we are very happy with our choice. Obviously, the music and the theme have been used before and not only once, but we picked some pieces that weren’t used that much. It is a cool movie and cool music – a real classic for the ice.”

The Short Dance gave the couple more of a headache.

“We were looking for some music that won’t be heard this season like a 100 times,” said Gazsi. “I hope we did find something, but we’ll know only later. Now the important thing is to get the Latin theme out of it. We’ve been taking lessons from professional ballroom dancers because at the end it is all about moving your butt the right way,” the 26-year-old laughed.

“Latin is a great theme for the short dance,” he continued, “but we were disappointed with the compulsory dance part, the Rhumba. The Rhumba is a dance that has been done for a 100 years almost.”

The German Champions feel that there is an obvious break between the “old” compulsory dance and the modern short dance part.

“There is not so much material for the key points in this dance (Rhumba) and it will be interesting to see how it will be judged,” noted Gazsi.

Overall, the dancers are pleased with their preparations for the upcoming season. Gazsi, who serves in the German army, had to attend a class of four weeks in June/July and was only able to come to one practice a day. However, this didn’t affect them much.

“Still we’ve done more this year than at the same time last year,” Zhiganshina pointed out. “Our short dance wasn’t ready in July last year like it was this year. We still need to work a lot on everything, but basically the programs are ready.”

Sinicyn knows that the expectations are rising with the success at Europeans and Worlds.

“As for pressure, they probably feel that they need to do something more and better, but you can deal with this only through hard work,” he noted. “They are working very well. In my opinion, they have improved technically this season and now it has become obvious – like the work of the knees, the smoothness. I really like this softness that they have developed.”

Zhiganshina and Gazsi are planning an early start in the upcoming season with the Nebelhorn Trophy at home in Oberstdorf next month, immediately followed by the Ondrej Nepela Trophy in Slovakia. The team is then scheduled for Skate America and the NHK Trophy, and will return to the Grand Prix series for the first time since fall 2007.

“We are glad that we’ll be back on the Grand Prix and that we weren’t left out again like in the past few years,” Gazsi noted.

Both skaters approve of the ISU introducing a minimum score and cutting down the participants in the dance event to eight.

“On the one hand it is a shame for us as we could have had some good results last year with some Grand Prix events being rather weak,” commented Gazsi. “On the other hand it is better that the ISU is more strict about the Grand Prix selections because the competition will be more interesting and at a higher level.”

The goals for the new season are clear for the team.

“We want to be better than we were last season and want to improve our weaknesses, like our speed,” offered Zhiganshina. “So everyone can see that we have improved.” “We want to be interesting and we want to give something to the audience and not just check off our elements,” added her partner. “Obviously we’ll try defend our top-ten placement in Europe and we’ll try to break into the top ten at Worlds.”

Sinicyn agrees, but he doesn’t want to put too much pressure on the skaters.

“As for the perspectives, it is always difficult to assess,” the coach acknowledged. “As we say in Russia, ‘between the cup and the lip a morsel may slip’. I think we have to continue on our path, show their variety as actors on the ice, and have different programs for the new season, Again, we need to do a dance that is more technically difficult in the transitions as it was (in the past season), and with this, I think, we should be able to improve our placements. By how much, we’ll see, and it also depends on how healthy they are and how they will work. They followed the right path the past two years. They are willing to achieve something and they are working with desire, which is the most important thing.”

Off the ice, Zhiganshina is working on her German citizenship.

“I just passed the citizenship test with the maximum of 33 points,” she announced proudly. Gazsi grinned. “I don’t think I’d have been able to earn as many points!”

Zhiganshina also gathered a lot of documents and will submit them as soon as she has everything that is required for her to apply for citizenship. Then the German authorities will check the documents, but it is unknown when they’ll decide about Zhiganshina’s case.

“It will also depend on our performances and how interesting we are (for Germany),” Gazsi said.

For the audience, the German ice dancers are already very interesting. Just recently they proved in the summer shows in Oberstdorf how much they have progressed artistically in their dramatic exhibition to Phantom of the Opera. Their acrobatic Tarzan number, which includes flying high over the ice on ropes, is a hit in each show they do.