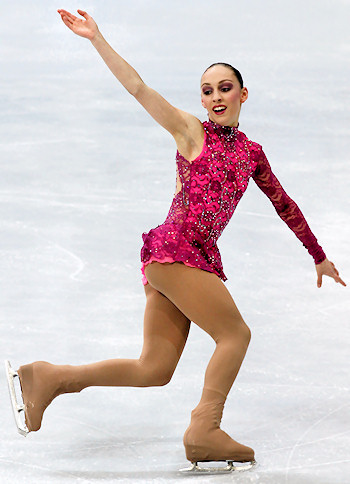 Just one month after her 15th birthday, California native Courtney Hicks captured the 2011 U.S. junior ladies title in Greensboro, N.C., in stunning fashion. With the highest score ever recorded at the U.S. Championships in her division, Hicks wowed the audience with her super-sized jumps that are a site to behold.

“I remember standing on the podium and realizing that I had finally accomplished what I had been working so hard for,” the gold medalist recalled. “It was the best feeling.”

Since winning the title, Hicks has started to understand the responsibility of being a champion, and is embracing her new job as role model for the young kids who train at her rink.

“I have received more attention from other skaters and I love it,” she shared. “I know that skaters—especially the younger ones, are watching what I do just like I did when I was younger. So when I am having a bad day, I know that it is important to remain positive.”

A year before her gold medal win in Greensboro, Hicks competed on the novice level at the 2010 U.S. Championships in Spokane, Wash. She finished in 5th place, and vowed to become a better skater.

“After the competition, I was really disappointed with how I skated. I decided that I never want to settle for just ‘okay’ again,” she admitted. “I worked harder last season, with the goal of making every part of my skating better. I also decided that I wanted to be the best, not just one of the best. So the work is never done.”

Hicks enlisted the help of famed 82-year-old John Nicks, coach of one of Hicks’ predecessors—Olympic silver medalist Sasha Cohen, to help with her transition into a champion. She also hired Phillip Mills, who studied at the American Ballet Theater, to choreograph her programs.

“Training with Mr. Nicks and Phillip Mills is a lot of fun,” she said. “They both are very calm, and they are both entertaining. They are funny in different ways though. Mr. Nicks is brutally honest, but makes it easier to take the criticism because of how he says it. Phillip is very light and he jokes about a lot of things, but he still says what he thinks. I am grateful and privileged to be able to work with both of them.”

The win in Greensboro presented Hicks with the opportunity to wear a Team USA jacket for the first time as a competitor at the World Junior Figure Skating Championships in Gangneung, South Korea.

“It was so much fun to compete against skaters from other countries,” Hicks explained. “It was also a little stressful because of the pressure I put on myself to skate well. I wanted to do my very best.”

She finished in a respectable sixth place.

“I feel like I skated well although I know that I could have done better on some elements,” she said of her performances in South Korea. “There are little details that could have been done to improve it. World Juniors taught me how important little details are, but overall I was thrilled with how it went.”

Since her international debut, Hicks has developed a hunger to be the best, and is planning to make quite a splash in competitions this season.

“I am approaching this season with a goal to be at the top,” she announced. “I learned two years ago that lower expectations yield disappointing results, and I want to avoid that disappointment. In this sport, there is always pressure to be at or near the top. I like the pressure—it pushes me to try to do better.”

Hicks and her support team decided that the most advantageous path for success this season is to compete on the junior level internationally.

“Mr. Nicks, my mom and I decided that I should skate on the Junior Grand Prix (JGP) circuit this season to gain international competition experience,” she explained. “I learned at Junior Worlds that it is definitely different competing internationally, and I think I can gain favorable recognition and experience this way.”

She makes her debut next week in Brisbane, Australia, competing against American Vanessa Lam, who won a JGP event last season in the Czech Republic.

“I don’t plan for a specific competitor,” she said. “I usually take each competition at a time and do what works best for me at that time, building from the last competition. If I do what I know how to do, that is all I can do.”

Hicks is, however, aware of the emerging superpower that is the Russian bumper crop of impressive junior ladies.

“There is a lot of hype about the Russian ladies,” she said. “They are good, but there are a lot of talented ladies from all over the world. My goal is to do what I do best and keep focused on my job.”

Keeping with her theme of shooting for the top, Hicks has set some lofty goals for herself for the 2011-12 figure skating season.

“I want to make the JGP Final, and keep improving throughout the season,” she said. “I like winning—if I am prepared and do my best, I can’t do any better than that.”

On the national front, Hicks has tested up to the senior level, and hopes to qualify for the U.S. Championships in San Jose, Calif.

“I am looking forward to seeing how my skating compares with the best skaters in the United States,” she said.

Last month, Hicks competed at the Glacier Falls Summer Classic in Anaheim, Calif., and showed her new triple flip-triple loop combination in the short program. She planned a quadruple Salchow in the free skate, but the jump did not materialize. She finished in third place overall—ahead of Olympian Mirai Nagasu.

“At Glacier Falls, I wanted to put my quad Salchow and new triple flip triple loop combination in the program,” she explained. “While the program wasn’t perfect, I was happy with it. I new there was risk going into the competition with what I was putting in, but I thrive on taking calculated risks. It is a way I build and learn from.”

Her short program is set to Vanessa Mae’s Raga’s Dance, which compliments Hicks’ exotic looks and newfound maturity. Coach Nicks has enlisted the help of former student 1979 World Champion Randy Gardner to help the process along.

“Being expressive has never come naturally for me,” Hicks admitted. “I really have to work on it. Randy has helped me out a lot, and I just try to have fun with it.”

The free skate is to Russian Sailors Dance (The Red Poppy) and Adagio by Reinhold Gliere, performed by Andre Anichinov and the St. Petersburg State Symphony Orchestra. The program is somewhat of homage to her mother’s ancestral heritage.

“My mother’s side of the family is Russian,” she explained. “Both of her parents are Russian, but were born in the United States. Three of my mother’s grandparents are from Russia.”

A high school sophomore at Connections Academy, Hicks is the eldest of three girls. Sister Kylie, 11, is a 6th grader who enjoys horses and swimming, while 9-year-old Kelsey likes shopping and making people laugh.

“I also have a cousin who is like a brother to me,” Hicks said. “His name is Kevin, and he is also in 10th grade. He plays football, and is my self-appointed skate carrier at competitions.”

When she isn’t training or competing, Hicks likes to hike and has an interest in photography.

“I especially like taking pictures of birds and butterflies,” she stated. “I also do a lot of reading.”

Hicks would like to one day become a professional photographer.

“I would really like to be a nature photographer,” she admitted. “I also like writing stories, so I would like to be involved in writing in some way.”

Over the summer, Hicks has had the opportunity to do a bit of traveling for business and pleasure.

“I went to Lake Tahoe with my family including my grandmother Esther, Uncle Paul and Aunt Natasha, and Kevin,” she said. “We went hiking, and I was able to take a lot of pictures. I was able to go to Sun Valley, Idaho, and San Diego as well. It was really fun.”