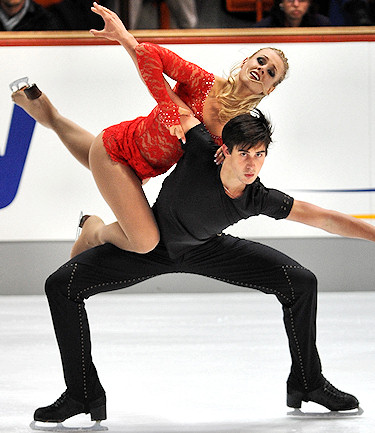 USA's Madison Hubbell and Zachary Donohue perform their Free Dance to I Put a Spell on You at the 2011 Nebelhorn Trophy.

USA’s Madison Hubbell and Zachary Donohue overtook more experienced teams to dance off with the gold medal at Nebelhorn Trophy in Oberstdorf on Saturday. Germany’s Nelli Zhiganshina and Alexander Gazsi who led after the short dance, settled for the silver and Canadians Kharis Ralph and  Asher Hill earned the bronze medal.

Hubbell and Donohue had drawn to skate last and put out a strong performance to I Put A Spell On You. They had good flow and their elements looked effortless. The Americans, who have been skating together only since the end of May, picked up a level four for the spin, lifts and twizzles, while the footwork sequences were a level two and three. The team scored 84.19 points and accumulated 139.01 points overall.

“Although we are excited about winning, we came here without any expectations for placements,” Hubbell commented. “We were just focusing on strong performances in our first international and we did that. Placement aside, we are happy with how we did this week.”

“Right in the beginning, we were fortunate that our timings were able to match very quickly,” she explained, when asked on how they gelled so fast as a team. “Our skating skills, strengths and weaknesses are similar and they work well together.”

Zhiganshina and Gazsi’s romantic Romeo and Juliet program to the soundtrack by Craig Armstrong had the higher technical difficulty as they earned a level three for both step sequences and a level four for the other elements. However, some exits on the lifts did not look as smooth as they could have,  and they scored less on the grade of execution as well as in the in the component score. With a free dance score of 82.63 points, they slipped to second at 137.66 points.

“We skated clean and we are pleased with this season debut,”  Zhiganshina said. “We are not sad to have lost. The competition was very strong.”

Gazsi  agreed: “But there is room for improvement. We still have some time before our first Grand Prix at Skate America, and we’ll have a lot of hard work ahead of us.”

Ralph and Hill danced to a Tango donned in simple black and red outfits. The Canadians had the same levels as the Americans and took their first medal at an international senior level event with 133.94 points.

“We are really excited,” said Ralph. “We weren’t really thinking about placing per se, we were more focusing on giving a clean performance and just  getting the judges’ reaction to see if they like our programs or not.”

The three top couples will meet on the same ice again in a few weeks at Skate America.

Cathy Reed and Chris Reed of Japan produced an oriental-themed dance to move up from fifth to fourth at 125.54 points.

The crowd liked Isabella Tobias and Deividas Stagniunas’ lively Rock’n’Roll routine, but the spin and the combination lift were only a level two. As a result , the team from Lithuania dropped to fifth with 125.24 points.