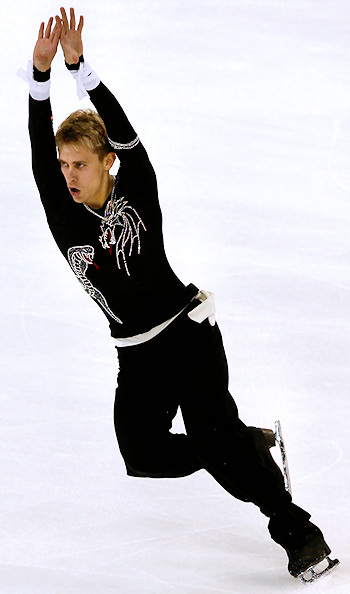 Michal Brezina of the Czech Republic lead the men after his solid Short Program to Japanese Kodo Drums.

It is figure skating’s equivalent of opening day—the first day of the ISU’s Grand Prix of Figure Skating competition. This year the first stop is Ontario, Calif., for Skate America where more than 50 athletes compete for the right to compete in the Grand Prix Final later this year in Quebec City, Canada. On Friday, the men and ice dancers saw action, and got the season off to a promising start.

The men were the first to take to the ice, and got the season off to a promising start. Michal Brezina, the 21-year-old from the Czech Republic, took a commanding lead over reigning World Championships silver medalist Takahiko Kozuka and teammate Daisuke Murakami from Japan.

Brezina, whose highest finish in a Grand Prix event was third back in his debut in 2009, was the class of the field with an effortless performance of his Japanese Kodo Drums short program.

“I’m happy that I am done with the short program, and I feel like I had a good, clean skate,” said the leader.

Brezina opened with an easy triple Axel, and followed that up triple flip-triple toe loop combination. Though rumored to be landing several different quadruple jumps in practices in advance of arriving in Ontario, Brezina chose to skip the move in tonight’s program.

“We decided to go for a triple-triple combination and triple Lutz just before I skated because my coaches were watching the competition unfold and didn’t think that I needed to take the risk of a quad,” he said. “I did a quad in the short at the Nebelhorn Trophy, and it will be in my short program later in the season. We’ll just choose my strategy from competition to competition.”

Brezina, who demonstrated amazing control of his blades while interpreting his music with aplomb, earned 79.08 points for his short program.

“I felt like I was going into the jump a little to the left, so I tried to pull it to the right to fix it,” the 22-year-old explained. “I just wasn’t able to make it work.”

Dressed in a dynamic pair of red pants and a fun black and red shirt, Kozuka failed to capture his usual pizzazz at any point in the program, leaving the audience nonplussed as he took his final bows.

“I was nervous because this was the first competition of the season, and I hadn’t competed in a long time,” said last year’s Grand Prix Final bronze medalist.

Kozuka is in a virtual tie with four other skaters separated by less than one point, but is more than eight points behind Brezina. His total of 70.69 points leaves him in a very precarious position heading into the free skate.

Murakami skated the most technically demanding program of the evening; opening with a quadruple Salchow-double toe loop combination, while also completing a solo triple Axel and triple flip.

“Today I am really happy to put the quad into my short program,” Murakami said with his effervescent smile. “Early in the season I wasn’t planning a quad in the short, but my coach and I decided to put it in. I hope to start building as the season goes, and will soon be hitting a quad-triple in the short program.”

Murakami skated to Peter Gabriel’s The Feeling Begins, and finished with 70.67 points.

Veteran international competitor Kevin van der Perren of Belgium skated a clean short program to music from Cirque de Soleil, but did not have the finesse that others skaters in the competition can showcase. Still, the two-time European medalist earned 70.09 points in the competition, and stands in fourth place heading into the free skate.

The top ranked American man is southern California’s Richard Dornbush, 20, the reigning U.S. silver medalist. Dornbush gave a credible performance, but was held back by an under rotated triple Axel in his routine to Beethoven’s Symphony No. 5.

“I definitely skimmed that one,” Dornbush said of the triple Axel. “It wasn’t one of my best, but they are the callers so it’s up to them to decide if a jump is rotated or not. I was happy when I got into the air and was rotating it. The fact that I came down short is too bad. I think that’s only about the third time that I have been downgraded on a jump.”

“Other than that, I thought the program was great and I was really happy with it,” summed up last year’s Junior Grand Prix Final Champion. “I think I got plus GOEs on everything else, except maybe the flip that looks a little low. It was nice to skate well in front of a home crowd. That felt good.”

“I felt pretty good skating out there,” said  Mahbanoozadeh. “I know I put a hand down on the triple Axel even though the ones in the warm up were really good. I was disappointed with my marks. The under-rotate on the Axel I’m not happy about. I did what I could and tomorrow will be better.”

Mahbanoozadeh plans to do a quad toe in the long program.

Razzano was not pleased with his skate.

“It is hardly like I practiced in the morning,” he elaborated. “I did decide to put the quad in after because they were so good in practice. I let it get away. I was actually very calm. I was more nervous waiting in my hotel room than I was this evening when I got here. I’m glad I got through it after the big pop. I keep saying I would rather be perfect in January.”