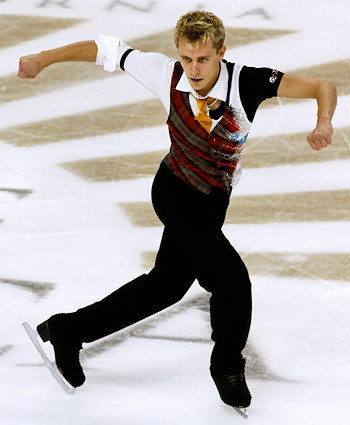 In what was an uneven competition, Michal Brezina of the Czech Republic came away with his first Grand Prix title in Ontario, Calif., at Skate America. Meanwhile, veteran competitor Kevin van der Perren moved up from fourth place to take the silver—his best finish on this stage in four seasons. World silver medalist Takahiko Kozuka struggled throughout his program, and finished in third place.

Brezina finished third in the free skate after opening with four strong triple jumps in his The Untouchables program.

“Like yesterday, my coaches were watching the competition, and were playing a game like in a casino,” the 21-year-old explained. “They told me that I would not do the quad today, which kind of made me mad. Changing the program at the beginning made it so that things were different at the end.”

Brezina made three jumping errors at the end of his program, but promises to be stronger for his next competition—Trophée Eric Bompard in Paris next month.

“The preparation for a jump is very different when you change your program,” he said. “It will be my goal to prove to my coaches that there will be no question that the quad will be in my programs in Paris. That way everything at the end will be as I practice.”

It was a surprise to many that van der Perren’s name even appeared on the Grand Prix roster earlier this season as he announced through various sources that he would put a close to his competitive career after last season. However, the 29-year-old proved that he still belongs on the international stage, ending his four-year Grand Prix medal drought.

“After Europeans last season when I finished in fourth place, I decided that I wanted to come back for my revenge,” van der Perren explained. “This was the first summer in a while when I could practice full out. It used to be that when I did a full run through one day, I would have to take the next day off because I was so sore.”

“I’m not bothering anybody in my country,” he said, of his decision to compete. “I still love the sport, but this is definitely going to be the end. I’m going to be 30-years-old and for a solo skater, that is late to still be competitive. I’m just taking it now step by step. If I’m in good shape, I will go. If not, I will not risk it. My first two competitions this season went well.”

“I just didn’t want to be last,” he quipped. “This is a better result than I expected, and I am just happy with my performance. Most important for me at the competition is to do the quad and the Axel. This season the only thing I’m really focused about is Europeans. I’m happy of how I skated. I’m happy of how it came out. Even if I would have been fifth or sixth, I still would have been happy.”

Though Kozuka had the second best free skate of the day, the Japanese Champion failed to demonstrate his usual flair and technical mastery in his Fantasia for Nausicaa program. The 22-year-old fell on his opening quad attempt, and struggled with several triple jumps as the program progressed.

“Of course I made mistakes on the jumps, but I was happy to get a level four on my steps,” Kozuka said through a translator. “I wanted to show that I was happy to skate to the music that I love.”

Hometown boy Richard Dornbush opened his western-themed program with a quadruple toe loop that inspired the loudest ovation of the afternoon.

“That was definitely the best part of the program,” said the 20-year-old. “After that I made a lot of little mistakes that I regret, but it was the first competition of the season and it was good to get my feet under me and get the quad out there.”

The U.S. silver medalist did land three clean triple jumps, but struggled with both triple Axel attempts and was not satisfied with his Grand Prix debut.

Kazakhstan’s Denis Ten moved up from sixth place after the short program to finish in fifth overall, while Japan’s Daisuke Murakami faded from third place to finish sixth..

“My head was white-washed, I think,” Murakami said. “Definitely being third after the short played with my head a little bit.”

Razzano was pleased with his performance.

“And to do it on my birthday just made it ten times better,” he said. “Especially after a disappointing short yesterday.”