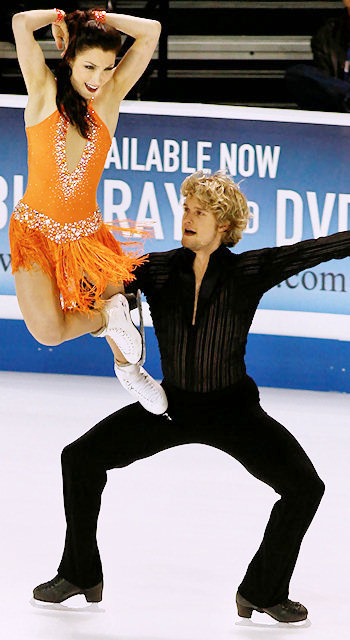 It was USA’s Meryl Davis and Charlie White’s night to lose, and they came away with a decisive victory after the short dance. The World Champions take a commanding ten point lead into the free dance, almost assuring a second straight Skate America title.

“The program is still really fresh,” said 24 year-old Davis. “It’s so early in the season that we have to expect that we won’t be perfect. But having said that, we are very pleased with how things went tonight, and look to build on this performance for the free dance.”

The three-time U.S. champs earned level three on both of their rhumba compulsory patterns as well as their circular step, but still earned 70.33 points with their samba/rhumba medley.

“We look forward to attacking our program a bit more as the season progresses,” White, 23, said. “We need to train it more so that we feel a bit more comfortable. There are lots of little things to fix.”

Sitting in second place are the current European Champions Nathalie Pechalat and Fabian Bourzat of France. Bourzat, 30, struggled with stamina throughout the program, and was barely able to catch his breath in between coughs after the performance.

“I caught a cold when I was at the French Master’s a couple weeks ago, and it turned in to bronchitis,” he explained. “I wasn’t able to get the rest that I needed last week, but I am feeling much better than I was then.”

Their samba/rhumba program has a relaxed feel to it from the Brazilian resort wear costumes to the fun music. However, though there were shades of brilliance in terms of performance, it appeared as if Pechalat and Bourzat were counting out their choreography at times.

“We’re not completely happy with the program,” said 27 year-old old Pechalat. “There was a fall in the middle, but what happened, happened.”

Finishing in third place was the German team of Nelli Zhiganshina and Alexander Gazsi with 55.66 points.

“We were really happy with what happened today,” said 27 year-old Gazsi. “Though we’ve competed three times already this season, we still feel fresh, and are happy with our performance.”

Though their style is suited to the Latin rhythm of the short dance this season, Zhiganshina and Gazsi were held them back was the compulsory rhumba section of the program.

“It’s a difficult trick to make the compulsory look like a part of the short dance,” Gazsi explained.

The top three teams agreed that this year’s short dance is a more challenging undertaking than last year’s, and are all struggling to figure out how to make the compulsory section mesh with the rest of the program.

“The patterns are a big change from the rest of our program, and the trick is to make the transition not look rough,” White explained. “Our job is to make the best of it, and get it on the right path.”

Pechalat agreed, “Last year there was more opportunity for choreography. This year it’s very hard to complete the rhumba without announcing that you are about to do it.”

Americans Madison Hubbell and Zachary Donohue are in sixth place.

Hubbell and Donohue teamed up in May and are making their Grand Prix debut togther as a team.

“The experience, competition-wise, in this venue has been great,” said Hubbell. “It’s very comfortable. It feels like we’re at nationals. It’s my first time at Skate America so it’s nice to stay inside the country.”

“The actual performance today it was an improvement than what we did in Oberstorf,” she said. “I think the short dance, unfortunately, is our weakness right now compared to our free dance. We have a lot of questions for the technical panel and everything. The score in general wasn’t what we were hoping for obviously. It was a significant step down from our performance [at Nebelhorn Trophy], so that’s disappointing of course, but all we can do is look forward to tomorrow and prove our strengths in the free dance.”

“It’s one of those fluke things that kind of happens and you can’t really control that stuff,” Lorello said. “You just have to be prepared that if it does happen, you can get the best recovery you can and keep going in the program so it doesn’t affect your other elements and your performance.”

“I thought it went really well,” said Cannuscio. “We had decent levels. Obviously we didn’t get any level on our twizzles, but other than that, our Rhumba was both twos and threes. We would’ve liked fours, but they both had threes. Our lift got a four and our circle had a two.”

Canadians Alexandra Paul and Mitchell Islam are in eighth place.