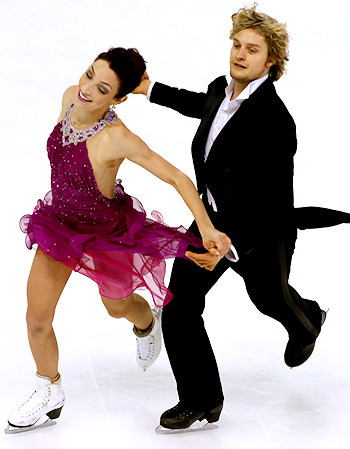 USA’s Meryl Davis and Charlie White waltzed away with their second consecutive Skate America title in Ontario, Calif., as expected, setting themselves up once again as contenders for the World title next March in Nice, France.

“It’s nice to have the first competition of the season be here at home at Skate America,” White, 23, said. “We definitely felt the support of the crowd throughout our program, and that’s always a great boost as a competitor.”

The World Champions skated an inspired routine to Strauss’s Die Fledermaus, chock full of technical content few teams could execute. With the exception of their two step sequences in the program, Davis and White earned level four on each of their elements on the way to scoring a whopping 107.74 points for their efforts.

“Our score is really encouraging,” White admitted after the program. “It’s a sign that we are heading in the right direction. Of course there is a lot of nuance that we need to work on to make the program more complete, but this is definitely a good start.”

Building on last season’s Golden Waltz short dance, Davis and White embraced the feel of this dance, and their total competition score of 178.07 points was more than 20 points higher than the silver medalist’s.

“It’s not foreign to us to skate to classical music,” Davis, 24, said. “For us it was about maturing to the point of having the experience to be able to properly interpret the character. And though we are not surprised that we were able to perform the program so well today, we are happy with the outcome.”

Finishing with the silver medals were France’s Nathalie Pechalat and Fabian Bourzat, who performed far below their normal level in today’s free dance.

“It was a nightmare for me,” said Bourzat, who is still suffering the lingering affects of bronchitis. “It was less difficult for me today because I did not go into the program with the same spirit (as the short dance). Before we competed, our coach said that we should focus on the elements and approach this more like an exhibition. We just had to get through the program, so we weren’t really trying to put everything into it.”

Skating to the theme The Pharaoh and the Mummy, it was obvious that Bourzat’s heart was not in the performance. Instead it was a laundry list of elements that he and Pechalat were checking off as the program wore on.

“A few years ago, we did an exhibition with a similar theme, and we thought that it could one day be a good competitive program for us,” Pechalat shared. “We waited for a good year to do it, and this was the year. As the season goes on, I can tell you that the program will get much better when we are completely healthy and can put everything that we have in to it.”

The silver medalists finished with 156.29 points, more than 20 points ahead of the bronze medalists Isabella Tobias and Deividas Stagniunas from Lithuania.

“We are very happy with the bronze medal,” said Stagniunas, 26. “We want to thank you for inviting us—we were just added to the roster about two weeks ago, so to come away with a medal is a surprise.”

Skating to a 50s themed program, Tobias and Stagniunas were making their Grand Prix debut in Ontario. After teaming up last season, the duo is rising up the international ranks quite rapidly.

“This is incredible,” American-born Tobias said through a smile. “We work really hard, and it’s really exciting for us as we look forward to the rest of the season.

Tobias, 20, is a classically trained ballerina who studied for eight years at the George Balanchine School of American Ballet in New York City.

“Performing at Lincoln Center with the New York City Ballet I think really helped me with nerves,” she said. “I learned when to turn it on and off, which I think has really helped me in my ice dancing career.”

The bronze medalists finished with 132.58 points, separating themselves from the fourth, fifth, and sixth place teams by a little less than two points.

Germany’s Nelli Zhiganshina and Alexander Gazsi slipped from third place after the short dance to finish in fourth overall, while Kharis Ralph and Asher Hill of Canada fell to fifth.

USA’s Madison Hubbell and Zachary Donohue had the third best program of the night, but had to settle for sixth place overall as they were unable to overcome their short dance deficit.

“We felt good,” said Hubbell. “Our goal after [the short dance] was not to let our scores and the whole event overtake us. We stayed strong and confident in what we could do. It wasn’t our perfect performance, but we fought for it and stayed aggressive.”

“We felt a little shaky at first, but that’s kind of how our free dance goes,” said Cannuscio of their performance. “We settle into it as the program goes on, but we felt good.”

“After we got through those twizzles, I was not worried about anything after that,” added Lorello. “I just put the short dance behind me. Mistakes happen and all you can do is move forward.”