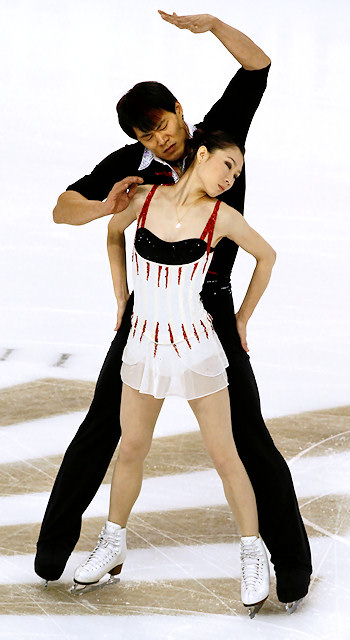 China's Dan Zhang and Hao Zhang perform to a "A Transylvanian Lullaby" by John Morris for their Short Program.

The pairs short program competition at Skate America this evening in Ontario, Calif., was perhaps the closest finish since the new judging system was introduced to the Grand Prix back in 2003. Just three points separate the top five teams from one another, and there is just a .17 difference in score between second and fifth place.

After taking last season off due to injuries, China’s Dan Zhang, 26, and Hao Zhang, 27, were the leaders with 62.85 points. This is the first competition for the three time World silver medalists in 19 months.

“I had several injuries—to my hand, my shoulder, and my knees,” said Hao Zhang. “I have only been back on the ice for three months, and I have been skating full out for a month and a half. My health is still not the best, but we are pleased with today’s performance.”

The leaders were able to demonstrate the high level of difficulty in technical elements that propelled them to seven consecutive Grand Prix Finals, but they recognize that they still have some work to do in their Transylvanian Lullaby program.

“We sort of used our time away from skating to relax and recover and to renew our competitive energy,” Dan Zhang explained. “We are glad to be back, but this is just the start of our return to competition. We have so many things that we need to improve.”

Sitting in second place is the new American team of Caydee Denney and John Coughlin, who were the first skaters of the competition. The connection between the two was obvious in their East of Eden program, and they seemed at home with each other with only months of skating together under their belts.

“We are close, and have a very good relationship,” 25-year-old Coughlin said. “In this program, we don’t really have a story. We’re just us, and we’re showing everyone how we are with each other in real life.”

Their program was solid from start to finish save for a hold-your-breath moment on the throw triple flip. Denney used her cat-like reflexes to save the landing, and kept them in the running for a medal.

“I knew that I was going to do it,” Denney, 18, said with her usual confidence. “I had to fight for it, but there was never any doubt in my mind.”

Denney and Coughlin scored 59.62 points on the night—the same total as Russians Vera Bazarova and Yuri Larionov who are in third place. In the case of a tie in the short program, the higher technical score is the tiebreaker, and the Americans came out on top.

Skating to music from Tosca, Bazarova (18) and Larionov (25) showcased an elegance that has come to be a trademark of Russian pairs skating. However, on their opening element—the side-by-side triple toe loop, Larionov took a hard fall.

“I’m personally not very pleased with how I skated today,” said Larionov. “I made the unfortunate mistake on the jump, but I also missed the end of the steps. I don’t know what happened because these are not mistakes that I usually make in practice. I will work hard to improve from this performance.”

Finishing in fourth place were last year’s silver medalists Kirsten Moore-Towers, 19, and Dylan Moscovitch, 27, from Canada. The duo had a small mistake on the opening triple twist, but was clean otherwise in their Borsalino program. They scored 59.60 points for their efforts.

World Champions Aljona Savchenko and Robin Szolkowy had an uncharacteristically sloppy performance, and ended up in fifth place. After falling on the opening throw triple Axel attempt, the Germans seemed out of sorts.

“Now I know how it feels to put the triple Axel in the program in competition,” Savchenko said optimistically. “I know how fast I have to rotate it, and what I need to do in the entry.”

Savchenko and Szolkowy skated a dark and intense program to Hans Zimmer’s Angels and Demons, and perhaps got caught up in the mood of the theme.

“We were a bit behind in the music from the very start, so it was hard to keep up with what we had to do,” Szolkowy admitted. “This program is like any other—you have to get in to the character. It’s difficult to maintain that when you are catching up.”

“It was a lot of fun,” said Marley of her first Grand Prix experience. “Everything I imagined. It was just what I thought [it would be] or better.”

“We still have a lot to improve on throughout the entire season,” admitted Brubaker, “but it’s still fairly early, so we want to go back and really look at our levels and see how they are calling some of our elements and make adjustments.”

“We’re growing every day we practice this stuff and keep doing what we are doing,” said Brubaker of their development as a new pair. “Unfortunately, the one thing you can’t learn in a season is experience. That takes time and developing, but we’re on the right track to doing that.”

Brubaker has lost between 10-12 pounds since last season.

“I feel good at this weight,” he noted. “I think I trimmed a lot of muscles that I didn’t really need and it’s helped me. I’ve changed my off-ice training regimen and I’m strong in the right kind of ways now.”

“We felt really good,” said Vise. “We had a good day today and we finally felt the ice a little more than we have the past couple days and we were calm and having fun out there.”