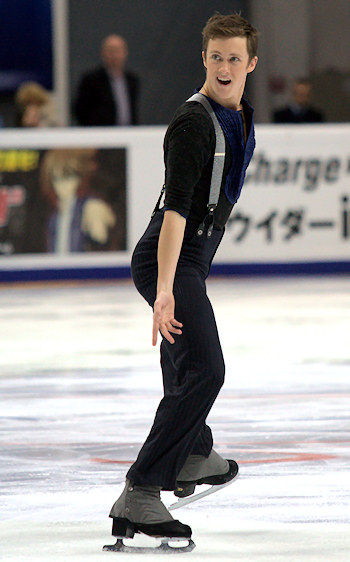 For the event with only nine participants and the overall running time of an hour and a half, the Men’s Short Program at the Rostelecom Cup was full of drama and the performances ranged from nearly perfect to pretty much disastrous.

Abbott’s easy-going jazzy routine to Bei mir bist du schoen and Swing Kids did not feature a quad jump attempt, but otherwise was as good as it gets. The neatly choreographed program demands at least as much attention to the proper presentation of all connecting moves as it does to the elements’ set ups. However, the two-time U.S. Champion was up to the task, making it very easy for the audience to get behind his performance.

“I had a lot of fun tonight,” said the student of Yuko Sato afterwards. “More than I have had in a very long time. Maybe be even ever. The Russian audience is so receptive. They started clapping right at the beginning and with each clean element they got more and more excited and so did I. It is much easier to skate with such strong support. It was great.”

When asked the reason for him having so much fun he elaborated: “I worked very hard on this program and I do love to skate anyway, but there is a world of difference between skating a program in practice and doing it in front of the audience. Especially if you skate as well as I believe I did today. People here are very knowledgeable about figure skating. They know if you do something good and they reward you with applause. The audience was truly great today.”

Hanyu fell on the opening quad toe loop attempt, but delivered an otherwise very strong routine to Scriabin’s Etude in D-Sharp Minor in which all non-jumping elements received level four. He is currently second with a new personal best of 82.78 points. The student of Nanami Abe flowed from one element to the next without ever stopping to catch a breath.

“Naturally, I am a bit disappointed about missing the quad,” said the current Nebelhorn Trophy Champion. “Now I have to leave it behind and change my mindset for tomorrow.”

Hanyu still has a chance to qualify for the Grand Prix Final of Figure Skating with a victory at the Rostelecom Cup, but he prefers not to get so far ahead of himself.

“I feel no extra pressure because of a possibility of qualifying for the ISU Grand Prix Final,” said the 16-year-old. “In fact, I do not think about my placement at all. I am entirely focused on the free skating tomorrow.”

Michal Brezina edged Javier Fernandez for the third place, scoring 79.01 points. Despite the promise to go for a quad, which he made at the Trophée Eric Bompard press conference last week, the Czech played it safe in Moscow. When challenged about it, he defended his choice.

“Everyone asks me when I am going to put a quad in my short program,” said Brezina. “I never know how to answer it. We have decided it together with my coach that the program will stay this way until my quad is completely stable. In the short program even a little mistake may cost you a lot of points, so I just want to skate clean and until my quad is 100% reliable. The program going to stay the way it is. I can promise you that right now.”

Nevertheless, he achieved his goal, nailing all three jumping passes in his intricate and well delivered routine to Japanese Kodo drums. He did, however, have a slight wobble on camel spin.

“I feel quite good about what I did today,” said Brezina. “All the jumps were clean, but I have struggled a bit with spins and steps, so this is something to work on in the future. I nearly matched my season’s best, so I am happy and I hope to skate even better tomorrow.”

The program Javier Fernandez delivered in Moscow today was a world apart from the one he skated at the same venue last season. Instead of a comedy, relying heavily on pantomime to carry the theme through, he skated a sophisticated routine to the music I love Paris and Petit Fleur. The music highlights his basic skating skills and strong musicality. He nailed the opening quad toe loop (the only fully successful quad attempt of the evening), but doubled a triple Lutz in combination with a triple toe. He is a close fourth with 78.50 points, tied with Brezina on the program components score.

Two other Russian participants – Sergei Voronov and Konstantin Menshov, who were both hoping to stage a comeback at the home Grand Prix event, struggled with their jumps and finished eighth and ninth behind Grand Prix debutant Andrei Rogozine of Canada.