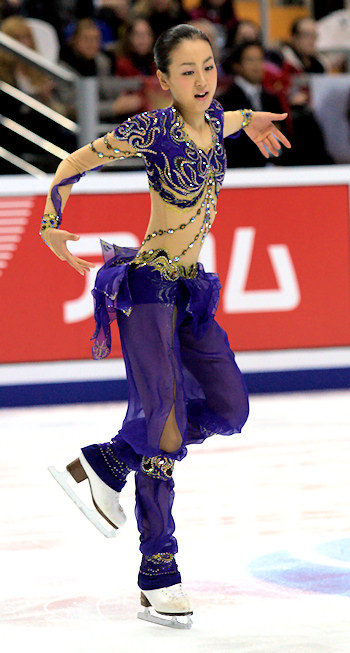 The final stage of the 2011-12 ISU Grand Prix of Figure Skating Series began today in Moscow with the Ladies Short Program. With the diverse field ranging from debutants to World Champion, the level of the event was surprisingly even. Japan’s Mao Asada currently leads the ladies, followed by Russia’s Alena Leonova and Adelina Sotnikova.

Asada, who had decided during the morning practice not to go for a triple Axel and had no triple-triple combination planned, finished first with the second highest score of the Series (64.29) on the strength of overall quality of her skating.

Eschewing dramatic scores she favored in the past, the student of Nobuo Sato shined throughout her performance to Scheherazade, floating effortlessly from one element to the next with the smile never leaving her face. For all the apparent easiness, the program was quite heavy in terms of technical content, including a rarely occurring level four for the step sequence.

“I believe I had a great start of the competition,” the skater summed up. “It is something to build on in the free skating tomorrow.”

Skating last, Leonova held nothing back in her short program to Pirates of the Caribbean, eliciting by far the loudest response from the audience. With three jumping passes as the first three elements of the program, the student of Nikolai Morozov was free to explore the character of her heroine – a mermaid turned a pirate, according to the skater – in a lot of detail. The choreography has her alternatively fencing, flirting, and fighting, and each new development was greeted with enthusiastic applause. The NHK Trophy bronze medalist had the spectators in the palm of her hand during the straight-line step sequence. The judges and the technical panel were equally impressed, and she received level four for the steps.

Leonova trails Asada with 63.91 points, well above the rest of the field.

“I am quite satisfied with the performance, despite some minor flaws in it,” said Leonova at the press conference. “I was very happy to see so many people coming here to root for Russian girls. It was great to feel their support.”

The 20-year-old was able to overcome her aversion to skating last. “I tried to focus on the positive things, skate for the people and for my coach,” she said. “I have tried to ignore the fact that I had the last starting number”.

When asked about the changes to her skating regiment since joining Morozov’s group last summer, she did not hide her happiness about the move. “The practices have become much more fun. I have never found so much joy in every day of training as I do now.”

Leonova has not severed ties with her old coach, however. “Whenever Nikolai Alexandrovich [Morozov] has to leave, Alla Yakovlevna [Piatova] comes to Novogorsk to work with me.”

For Sotnikova, the pressure of competing at the Senior Grand Prix event at home could have hardly been any higher. The skater who swept all Junior events last season and won the Senior national title has to deal not only with the disappointment of a flawed performance at her Senior debut three weeks ago, but also with the expectations of her own skating federation. The Russian Skating Federation has chosen her as a face of the competition, putting her photographs on billboards all around the city and on posters present inside the venue.

“In the past, we have always chosen the most decorated Russian participants,” said the General Secretary of the Russian Figure Skating Federation Valentin Piseev at the pre-event press conference.”However, now we have decided not to dwell on the past, but rather focus on the future, looking forward to the Olympic Games in Sochi. So we have chosen this charming young lady. She is our future.”

The future, one has to add, is definitely not lacking in either skill or ambition. However, the student of Elena Buyanova still needs time to recapture the confidence she displayed last year. The World Junior Champion showed great ability of thinking on the fly when she turned her planned solo flip into a combination with a double toe after falling on the opening triple Lutz.

The choreography of Sotnikova’s routine set to an unusual arrangement of Maurice Ravel’s Bolero was one of the most challenging of the evening with a never-ending stream of full-body connecting moves, However, the program still looks a bit rough in places and needs better pacing. There was, however, no doubt that it was right up there with the programs of the leading Senior ladies, which, after all, is the main goal for Sotnikova this season. She finished a distant third with 57.79 points.

“Naturally, I am not happy about the performance,” she said. “I have once again missed my triple-triple combination, but I will try to do better tomorrow and I will keep challenging for top positions.”

The two-time national champion was at loss to explain the reason for her mistake. “In China I was shocked by how nervous I was, especially before the short program. But having done a Senior competition once, I have come to realize that it is not that much different to the Junior events. Today I was calm, so I do not know what has happened.”

Closely trailing her teammate is Sofia Biryukova (56.30), who landed a combination of two triple toe loops, but had to fight to keep the landing of her double Axel. Skating to the music from Seven Years in Tibet, the student of Viktoria Volchkova appeared somber and lacked the sparkle and attack she displayed in the past, but she got the job done.

“Sofia has gained a lot of experience from participating in the Cup of Russia last year,” said the coach. “She paces herself much better now. Besides, she is growing older and understands things differently now. It also helped that she had to go first. There were no extra emotions from watching her rivals compete, negative or positive. She just went out and got the job done.”

Finland’s’ Kiira Korpi had to settle for the fifth place (55.81) after she singled the Axel and was only able to execute a triple toe – double toe combination in her charming routine to Somewhere over the Rainbow. However, with the results being very close, both she and Japan’s Haruka Imai (55.20) are still in contest for a bronze.