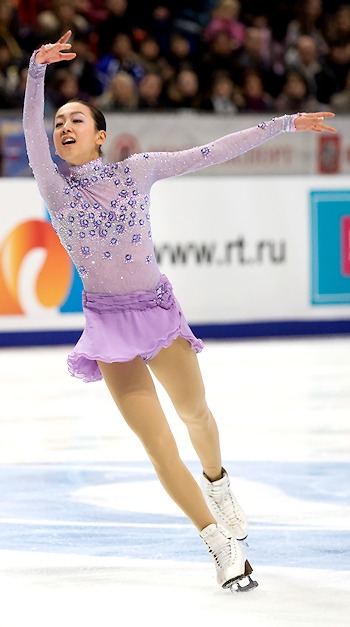 The second competition day of the Rostelecom Cup attracted a sizable crowd to the Megasport Arena in Moscow, Russia. The venue with a 14,000 seat capacity was more than two thirds full for the Saturday finals, a major improvement over half-empty stands in the past few years.

The first set of medals was decided in the Ladies event. Though the top three placements did not change from the Short Program, the level of the performances were not as good as yesterday. Japan’s Mao Asada won the gold, while Russia’s Alena Leonova and Adelina Sotnikova took the silver and bronze, respectively.

While Asada decided to play it safe and did not attempt a triple Axel, the removal of the challenging element did not help her to skate clean. Her performance to Franz Liszt’s Liebestraum featured only three clean triple jumps: two flips and a loop. The two-time World Champion opened up with a triple Lutz attempt in the air and doubled a planned triple Salchow.

Despite the mistakes, Asada’s program could not be described as anything but gorgeous. Strong flow and regal carriage allowed her to own both the music and the audience’s attention throughout. She scored 118.96 to place first in the long and overall (183.25), which guaranteed her a spot for the upcoming Grand Prix Final of Figure Skating.

“I am very happy to qualify for the Grand Prix Final, but I am disappointed with the way I skated,” said the 21-year-old at the press conference. “It was at best 50% of what I am capable of. I have not qualified for the Final in the past two years, and it was additional motivation for me to work hard and to improve my skating. I am happy that I have finally been able to do it, and I hope to skate well in the Final.”

When asked about competing against the next generation of skaters, she said that she had met Adelina Sotnikova before.

“I first met her two years ago when I came to Russia to work with Tatiana Tarasova on choreography. I was very much impressed by how good she was. I am happy to be competing against her today. I like to have strong rivals. I think it will help us both to improve. In the past couple of years a number of strong Ladies have emerged in Russia, this kind of pressure pushes me to work even harder.”

Leonova’s long program to Barber’s Adagio for Strings and Clint Mansell’s Requiem for a Tower was quite a departure from both her short program a day before and the character-driven programs she has done in the past. Somber and mostly slow paced, it showed a different side of the skater who is primarily known for her exuberance and energy.

While Leonova still needs to work on expression, the overall impression was strong. Technically, it was also quite sound. The student of Nikolai Morozov nailed the opening combination of two triple toe loops and went on to land three more triple jumps, though her Lutz attempt received an edge call. The Russian silver medalists’s only serious mistake was a fall on her final jumping pass – a double Axel. She earned a total of 180.45 points for the silver, edging out teammate Sotnikova for a place in the Final.

“Naturally, I am very happy to skate as well as I did,” said the 21-year-old. “It was practically clean except for that fall on a double Axel, but this is a kind of mistake which can happen to everyone. I felt that something was wrong already in the air, so the fall did not come as a surprise. It was just a lack of concentration, I guess.”

Her cheerful personality, which she has to subdue for the duration of the program, came back in full strength when she talked about her plans for the future.

“The more competitions I have, the better,” said Leonova, who was one of the few skaters who elected to do three Grand Prix events. “It gives me more chances to work on the program and more opportunities to get comfortable with it.”

“I do not plan to work on a triple Axel this season,” she responded, when asked about plans for future elements. “It is too dangerous and one might get injured. During the off-season, however, why not? I have already tried it before and I was pretty close to landing it.”

Sotnikova was not able to overcome the pressure, but still won her second bronze medal of the Series. She fell out of the landing of her opening triple – triple combination and was not able to execute a planned double toe – triple toe loop one. In the end, she landed only three clean triples.

“I skated better than in China, but not by much,” said the 15-year-old, who received her season’s best. “The lutz – loop combination was worse than before, but I will keep working hard and improving my skating. I hope to be able to skate better next time.”

Sotnikova performed to the same music as Asada (Liebestraum), and while her performance was not as stately as Asada’s, the music brings forward the quality of her basic skating skills and the clarity of her lines. She received 169.75 points and plans to focus on her preparations for Russian Nationals.

“I did not expect to be able to make a trip to Canada,” said the two-time national champion. “I doubt anyone will withdraw, so now I will focus on the Russian Nationals, which is going to be a very difficult competition with a lot of strong skaters. I have to be at my best there and do everything clean.”

The student of Elena Buyanova can still recall the first time she met Mao Asada.

“The first time I saw her I was like ‘Wow! Mao Asada is skating at our rink!’,” she said. “It was a great honor for me to be on the same ice as such a famous skater. It is also a great pleasure to be able to compete in the same competition as her now.”

The current World Junior Champion was surprised to be on the event’s posters, but does not believe that being chosen as a face of the event has added any extra pressure for her.

“The Russian Figure Skating Federation had not told me about their choice in advance,” she shared. “The first time I saw the posters I was ‘Oh? Is it me?’ I was very pleased and honored, but I have tried to pay no attention to it and focus on doing what I can. Unfortunately, I was not able to do it.”

Teammate Sofia Biryukova landed four clean triples, including a solid triple toe loop – triple toe loop combination, and two slightly flawed ones to finish fourth (166.07). Giacomo Puccini’s Turandot suited her much better than her short program’s choice. Its power and momentum gave her something to work with and in combination with the feeling of doing a good job, it helped to carry her throughout the routine.

Even though the 17-year-old, who is one of the age-eligible contenders for a spot at the European Championships team, delivered one of the best performances of her career to date, she does not plan to rest on laurels.

“We are thinking about making the program harder,” Biryukova revealed.” There is enough time to address the issue before nationals, so we’ll certainly try. But it is not a work of a minute. One has to find the exact spots in the program to execute the jumps. It will take a while, but we will work on it. I had quite a difficult start of the season. For some reason I had problems getting back in shape even though the conditions in Novogorsk were pretty perfect.”