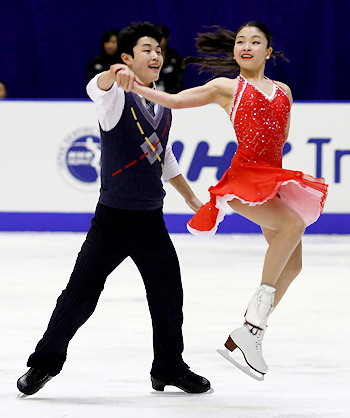 The Shibutanis looked relaxed and confident in their performance to In the Mood and Moonlight Serenade by Glenn Miller. The quick twizzles, the lifts, and the spin were a level four, while the two footwork sequences garnered a level two and three. The crowd liked the program right away and clapped along. The reigning World bronze medalists got a new season’s best of 92.83 points and moved up from third to first (151.85) overall.

“We are very happy with our performance today,” said Maia Shibutani. “We think it was a lot stronger than last week. Obviously it’s still early in the season and we have a lot to build.”

“This week we came here to skate for ourselves and all of the fans here,” Alex Shibutani added. “The result wasn’t so important to us. It was a new experience to do two Grand Prix in a row. It was harder than we thought it would be, but now we know we can do it.”

The brother-and-sister team have now qualified for their first Grand Prix Final.

Weaver and Poje put out a very passionate performance to Je suis malade. Once again the Canadians impressed with their beautiful lifts, however, the spin and the diagonal footwork merited only a level two. They still could have won if they hadn’t received a deduction of one point for an extended lift (probably for the last straight line lift as they believed). The 2010 Four Continents Champions scored 91.69 points for their free dance and 151.76 points overall.

“We felt great from the warm up this morning until this afternoon,” said Weaver. “We just were in the zone, ready to perform the program. We felt the passion and emotion of this free dance which is one of the most important aspects. We lost a few points technically and those things we’ll review. We did lose one point for an extended lift which is still frustrating.”

“We have been practicing that lift with our coaches to make sure that we were on time,” said Poje. “We actually joked around on practice that we need to install stop watches in our outfits so that when we are in position we just check it out and make sure we are on time and get out.We just have to work on it and make sure that we get out as quick as possible.”

With two silver medals, Weaver and Poje made it to the Grand Prix Final again.

Overnight leaders Elena Ilinykh and Nikita Katsalapov had to overcome a scary fall in the warm up when she crashed into the boards. The Russians then appeared somewhat cautious in their dance to a modern and powerful arrangement of  Ave Maria. Their levels were good – like the Canadians, they had a level four for the four lifts and the twizzles, and level two and three for the footwork, but there were a few little wobbles here and there that cost them on the GOE. The program looked a bit rough around the edges and needs more mileage, but it has good potential. The team scored 87.65 points for the free dance and totaled 149.48 points.

“For me and Elena it was a really good beginning of the season,” noted Katsalapov. “Yes, our free dance was not so good, but we know our goal and we know which way to go. So next time it will be much better.”

Ilinykh came limping to the press conference and iced her right knee. She thanked her partner for his support.

“Nikita was with me all the time,” she said. “He held my hand and said that we can do it.”

Later the couple withdrew from the exhibition gala due to a contusion of her left knee joint.

Nelli Zhiganshina and Alexander Gazsi of Germany remained in fourth place with 136.12 points. Their Romeo and Juliet was more solid than at Skate America. He did his twizzles, but the spin was somewhat off and merited a level two.

“I did the twizzles, but on some other elements we didn’t do everything for the levels,” Gazsi commented. “There is still a lot of work to do.”

Lorenza Alessandrini and Simone Vaturi of Italy performed to Tosca to place fifth at 133.29 points.

Canada’s Alexandra Paul and Mitchell Islam had to withdraw after the morning practice as she suffered a cut in her thigh in a collision with the Italians. There was another collision in the warm up between USA’s Lynn Kriengkrairut and Logan Guilietti-Schmitt and Japan’s Cathy Reed and Chris Reed. Chris Reed hurt his right leg, however, they still competed. The Americans finished sixth and the Japanese couple was ranked seventh.