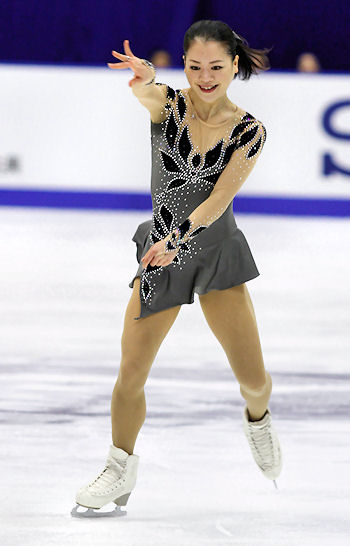 Suzuki skated last, and her performance to a modern arrangement of the Hungarian Rhapsody was a true highlight of the day. Suzuki not only nailed a triple toe-triple toe, a triple Lutz, and double Axel, but also earned a level four for her three spins and a level three for the footwork. At the end of the program she showed a lot of emotion and jumped up and down in joy. The 26-year-old posted a new season’s best of 66.55 points.

“I am very happy with my short program, especially with my three jumps,” said Suzuki. “I was able to land them perfectly. The free skating is a completely different style, a classical piece (The Fledermaus), and I hope it will be an enjoyable piece for the audience here in Japan.”

Leonova was much improved over her dismal performance from Skate Canada. Skating to Sirens and Pirates of the Caribbean, the Russian completed a big triple toe-triple toe as well as a triple flip, double Axel, and level-four spins. Leonova improved her season’s best with 61.76 points.

“I have a 100 percent today,” she commented. “I did my jumps and I am also pleased with my levels. I was able to avoid all the mistakes that I did at Skate Canada. At Skate Canada I was very tense because I wanted to skate well so badly. Now I just wanted to enjoy skating.”

Asada’s season debut was very much anticipated. Dressed in an oriental-themed costume, she went for her triple Axel but singled. The two-time World Champion rebounded with a triple flip-double loop and a triple loop. In the Kiss & Cry she appeared much more relaxed and laughed with her coach, Nobuo Sato, instead of being close to tears like she was in the past when she missed the Axel. The Olympic silver medalist earned 58.42 points.

“The jumps affected my result today,” noted Asada, “but my goal is to go with the flow when it comes to the first jump and let the program flow. I think I did that today. I was practicing the jump and I felt ready for the triple Axel. My coach told me maybe it is better to go for a double Axel, but he also told me that it is my choice.”

Elene Gedevanishvili skated much better than at Skate America to finish fourth at 57.37 points. The Georgian put out a solid short toTango Jalousie that included a triple Lutz-double toe and triple Salchow.

“At Skate America it was an accident,” the the 2010 European bronze medalist recalled of her sub par short program. “I don’t even know what happened to me there. We were all in shock because I was ready. This time I was committed to rotate all my jumps, even if I fall.”

USA’s Ashley Wagner was a little shaky on her triple flip-double toe combination and the double Axel, but the triple loop was fine. The 20-year-old picked up a level four for her spins and is currently sitting in fifth with 55.88 points.

“I thought it could have been a little bit better,” admitted Wagner. “It was a little bit shaky. Overall it was a strong performance and I got all my levels. We switched to the loop and I think I got more points for it than when I did the Lutz. It wasn’t my best, but it was still good.”

Kiira Korpi of Finland messed up her combination when she did a double toe and underrotated a triple toe instead of the planned triple-triple. The two-time and reigning European bronze medalist hit the triple loop, but singled the Axel and came seventh with 53.70 points.