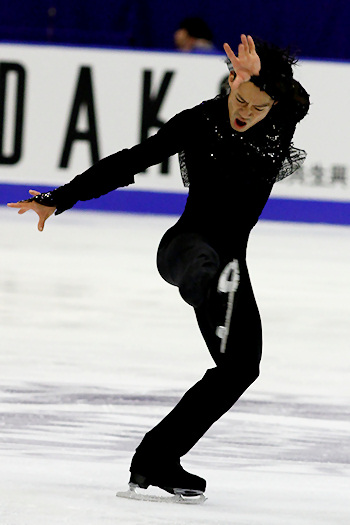 Daisuke Takahashi of Japan performs to "In the Garden of Souls" by Vas at NHK Trophy.

Daisuke Takahashi of Japan out skated his rivals with a spectacular performance in the Men’s short program at NHK Trophy on Saturday. Teammate Takahiko Kozuka came in second and trails Takahashi by 10.66 points. USA’s Brandon Mroz landed the first quadruple Lutz in an ISU competition to finish third.

Takahashi really sparkled in his oriental-themed short to In the Garden of Souls. His triple flip-triple toe, triple Axel, and triple Lutz were textbook-perfect and earned mostly positive Grades of Execution (GOE) from the judges. The 2010 World Champion picked up a level four for two spins and the footwork to post a new season’s and personal best score of 90.43 points. He is only the third man after Evgeni Plushenko and Patrick Chan to break the 90-point barrier in the short program.

“I am surprised myself about this score,” a still dazzled Takahashi said. “I never would have thought that I would get a score this high. Maybe I couldn’t perform a 100 percent, but I thought that there was a good chemistry in the performance. With each competition, step by step, I am improving.”

Kozuka put out a solid but less inspiring performance to noise jazz music entitled Inner Urge. He landed a shaky a triple flip, a triple Axel, and a triple Lutz-triple toeloop. The Japanese champion got a season’s best as well with 79.77 points.

“There were some shaky, dangerous moments,” the the reigning World silver medalist admitted. “Tomorrow I will avoid such little mistakes and instabilities.”

Kozuka had decided to take out the planned quad toe after the six-minutes warm up.

“I wanted to try the quad, but the ticket for the Grand Prix Final is on the line here. I did a triple flip on the warm up and decided to do the triple flip,” he explained.

Mroz nailed the quadruple Lutz in his routine to Mack the Knife. The landing was a bit scratchy, which prompted some judges to give him a negative GOE, but the jump was fully rotated and landed on one foot. Mroz has now made history by becoming the first man to perform the quadruple Lutz in an ISU figure skating competition. He also landed it two months ago at the Colorado Springs Invitational. The American scored 74.83 points.

“For me, it was little shaky,” said Mroz. “I was fighting. It was great to get the Lutz done. It was a step into the right direction. I am excited to get it done in ISU competition. Some people gave me some crap for it. So, there it is.”

Konstantin Menshov of Russia produced the only other clean quad, a toe in combination with a double toe, of the day to finish fourth at 74.67 points.

Japan’s Tatsuki Machida turned in a crisp performance to Dark Eyes and landed his jumps, but fell on the entry of the flying sit spin. He placed fifth with 72.26 points.

USA’s Ross Miner improved his short program performance from Skate Canada and made no major mistakes.