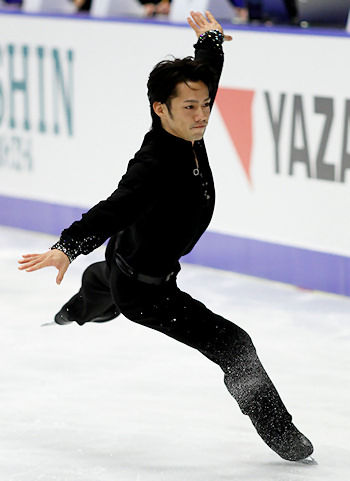 Daisuke Takahashi of Japan skated to a clear victory at the Men’s event as the NHK Trophy figure skating event wrapped up Sunday. Teammate Takahiko Kozuka took the silver, while USA’s Ross Miner jumped from sixth place after the short onto the podium to capture the bronze medal.

Takahashi shone again in his expressive Blues for Klook program. Ever ready for the challenge, the Japanese went for the quad flip – a jump nobody has performed yet in competition – but he missed it and it was underrotated. However, the 2010 World Champion did one in the warm up.

Takahashi overcame the fall quickly to produced two triple Axels and four more triples, however, he underrotated a triple loop and a triple toe. The Olympic bronze medallist got a level four for two spins and a level three for the footwork and the camel spin. He posted a new season’s best score with 169.32 points and took the title with 259.75 points overall.

Wining NHK Trophy also meant that he qualified for the Grand Prix Final.

“I am relieved to advance to the Grand Prix Final, but I know I must improve my performance in order to be ready,” noted Takahashi. “My performance today wasn’t a 100 percent yet and I won’t win in the Final with that kind of performance. But I am happy that I was able to land the quad flip in the six-minutes warm up.”

When asked about the Blues, he said: “In both the short and long, I am trying truly to express what I’m going through at the very moment. I’m not sure what it is. It is kind of how I react to the audience, to the venue, and what I’m feeling at the moment. It’s probably changing from performance to performance. So I communicate with the judges and with the fans. I’m trying to be a part of the music as if I’m an instrument. I’m the one that brings the music to life and the music also helps to bring my performance to life.”

Kozuka hit two triple Axels and four more triples, but two-footed and underrotated the quad toe in his routine to Nausicaa Princess of the Wind. The 2010 World silver medalist scored a new season’s best of 155.25 points and totaled 235.02 points.

“Ever since the World Championships, I have come to understand how good of a feeling it is to be on the podium,” said Kozuka. “I’m glad to finish in the top three, however, a closer look to my performance reveals some errors. I wasn’t able to skate cleanly from the beginning to the end and before I knew it, my performance was over. I’d like to train harder so I’m able to skate very clean.”

Miner gave a solid performance to The Untouchables soundtrack, completing two triple Axels, four more triples, and three level-four spins. He only stepped out of his first triple Lutz. The 20-year-old placed fourth (141.24) for this performance, and moved up to third (212.36) overall.

“It’s awesome to be up here,” said Miner. “I really wasn’t anticipating to get a medal here. It is my first Grand Prix medal. When I came to this competition, my goal was to make myself happy. So I did that today. It wasn’t a perfect, but a solid skate.”

Miner had watched the last group as he was in the first group. “I really wasn’t anticipating myself moving up to so much. It was a complete surprise to see myself up there.”

There was a lot of movement in the standings as other skaters also moved up while others dropped. Samuel Contesti of Italy came from seventh to fourth at 209.69 points, and Tomas Verner of the Czech Republic pulled up from ninth to fifth with 196.63 points.

Contesti was ranked third in the free with his playful medley of French Chansons including Valse a mille temps. He nailed six triples, and only put down his hand on a triple loop.

Verner looked much more solid than in the short program on Saturday. He put out the quad toe, but took a painful looking fall on the triple Axel, and then tripped and fell again in the choreographed step sequence.

“My legs weren’t fast enough,” Verner explained. “I knew I would fall, but I couldn’t do anything against it. Today I didn’t care about the judges, I was just skating for the crowd and it worked. I need a few more weeks. My performance here wasn’t a catastrophe, but not what I was looking for.”

Konstantin Menshov of Russia, who stood in fourth after the short, finished in sixth overall. He fell on a quad toe and a double Lutz.

USA’s Brandon Mroz was third in the short, but he had a terrible day. He crashed on a cheated quad Lutz and singled four jumps in the second half of his program to fade to ninth.