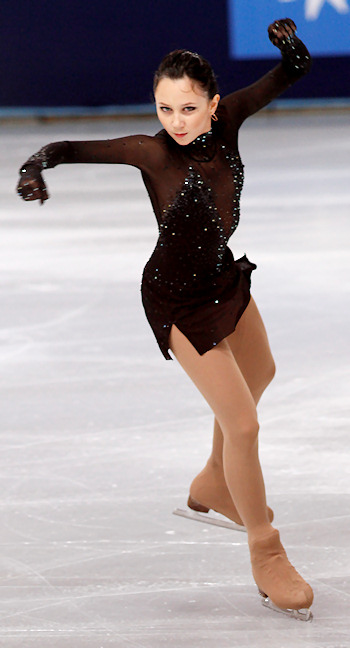 Elizaveta Tuktamysheva of Russia leads the ladies in Paris after the Short Program.

Tuktamysheva gave a similar strong performance of her Tango short program as she had at Skate Canada. The triple Lutz-triple toeloop combination, triple loop, and double Axel looked solid and easy. Two spins merited a level four, however, the layback was a level two. The 14-year-old earned a new season’s best of 62.04 points.

“I skated very well today,” said the young Russian. “I did all my jumps and I tried to skate the best I could. Maybe I was more confident than at Skate Canada. Since Skate Canada, my rating has improved and the judges gave me a higher score.”

Kostner nailed a beautiful triple toe-triple toe in the first seconds of her program to the Allegretto from Dmitri Shostakovich’s Trio No. 2, however, she had to fight for the triple loop. In addition, she tripped and fell at the entry of the circular footwork. The Italian scored 59.70 points.

“I feel a little tiredness in my legs,” the three-time European Champion noted. “Always sleeping in different beds gets to my concentration. I got back to reality when I tripped over my toe. I am satisfied with the technical part of my skate but I could have done better steps. Once the jumps were over, I thought the most difficult part was done, but the steps are not as easy as we think and I lost my concentration.”

Czisny didn’t appear as solid as she had at Skate America. She cheated and two-footed the triple Lutz, and though her triple loop was wobbly, she tacked a double on to it to salvage a few points. The highlight of her routine to La Vie en Rose were the spins. The former U.S. figure skating champion scored 57.25 points, about seven points below her season’s best.

“I’m not so happy with what I did, but I am still happy with the performance after the jumps,” Czisny commented.

Japan’s Kanako Murakami is in fourth place and is still in the running for the podium with 55.77 points. She went for a triple flip-triple toe, however, the toe was downgraded. The 2010 World Junior Champion recovered with a triple loop, double Axel, and two level-four spins.

Skate America bronze medalist Viktoria Helgesson of Sweden only did a triple toe-double toe combination instead of her planned triple-triple, and the triple loop was shaky. She sits in fifth with 54.16 points.

Maé Bérénice Méité of France pulled off her jumps including a triple toe-triple toe, but overall looked somewhat sluggish. She came in sixth with 50.49 points.