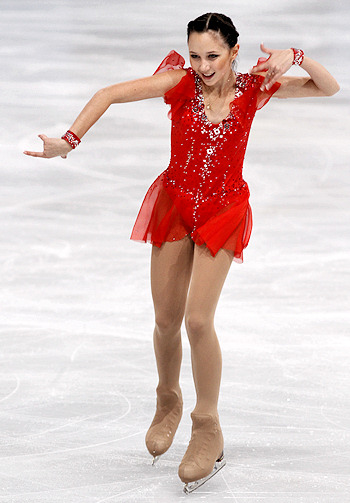 Elizaveta Tuktamysheva of Russia continued her successful debut on the senior scene by winning the Trophée Bompard Saturday in Paris, France. A feat even Mao Asada (JPN) and Yuna Kim (KOR) didn’t accomplish in their first senior season. The 14-year-old defended her overnight lead over Italy’s Carolina Kostner and USA’s Alissa Czisny.

Performing to Besame Mucho and other Latin music, Tuktamysheva hit a rock-solid triple Lutz-triple toeloop combination, a double Axel-triple toeloop, and three more triple jumps. Her only mistake was a double flip. The spins were worth a level four, three and two. The Russian junior champ posted a season’s best of 120.85 points, ranking second in the long program, but overall held on to her lead after the short to win with 182.89 points.

“It wasn’t a bad skate today, but obviously there were a few minor errors,” the World Junior silver medallist noted. “So there is something I can improve on.”

Tuktamysheva has now qualified for the Grand Prix Final of Figure Skating together with Kostner and Czisny.

“For the Final, I will prepare very well but I don’t plan changes in my programs,” shared Tuktamysheva. “I will work on the choreography and consistency.”

Kostner edged out Czisny for the silver medal by just 0.17 points. Her routine to the playful Piano Concerto No. 23 by Mozart featured four triple jumps and two level-four spins, but she doubled and stepped out of the flip. The three-time European Champion scored 119.62 points and was third in the free and second overall at 179.32 points.

“I am very happy to have finished today and that I can get a couple of days rest,” the 24-year-old commented. “I think my program was not bad, but all the way through I was telling myself, ‘just keep going’. I know I can do better and I have a lot to improve on.”

Czisny had a much better, cleaner skate to Valse Triste than at Skate America. She completed five clean triples, and as usual, her spins were beautiful to watch and merited a level four. The U.S. Champion picked up a season’s best of 121.90 points, was ranked first in the free skating, and remained in third place overall at 179.15 points.

“I was much more satisfied with my performance today or most of the effort today,” said the 24-year-old. “That wasn’t my best, but we changed a lot of things since Skate America and I was pleased with how I did today.”

Czisny replaced the triple Salchow as she wasn’t feeling comfortable with it, and decided to try a double Axel-triple toe combination as her third element. However, she only did a single Axel-double toe.

Kanako Murakami of Japan also improved over her first Grand Prix, the Cup of China. The 2010 World Junior Champion pulled off four good triples, however, she underrotated the Lutz and singled a flip and a loop. She finished fourth with 161.31 points.

Viktoria Helgesson delivered a solid performance without a fall. The blonde Swedish skater had some issues with the harder jumps, though. She doubled the Lutz and underrotated a shaky triple flip. The Skate America bronze medalist placed fifth with 154.90 points.