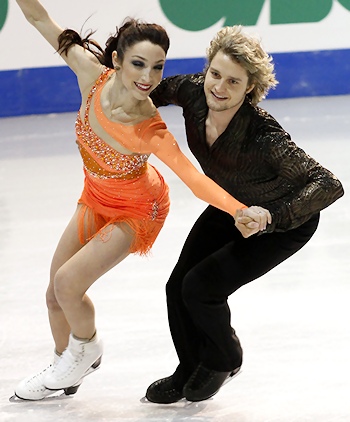 Davis and White turned in a confident performance to the rhythms of Samba, Rhumba and Samba. For the first time this season, the World Champions earned a level four for all elements in the Short Dance, and as a result, posted a new season’s best with 76.17 points.

“It was indeed our season’s best,” said Davis. “We’ve been working on our short dance a lot since Skate America and Cup of Russia. I think we’re feeling much more solid and confident with the dance and feel like we really got our feet under us. We’re really pleased with it.”

“A bigger lead is always nice,” added White, “but I don’t think it’s going to affect our mindset very much. We have the same idea going into every skate and that is just to do like in practice. As long as we’re doing that, we’re going to be happy.”

Virtue and Moir’s dance to Samba, Rhuma and Samba was even more characteristic, however, it was marred by a fall in the beginning. Moir went down, but was back up instantly, and he even improvised a few toe steps to catch up with his partner. The twizzles and the curve lift, as well as one Rhumba sequence, merited a level four, however, the side by side footwork and the first Rhumba sequence were a level three. The result was costly, and the Olympic champions scored 71.01 points.

“I caught Tessa’s skate,” Moir explained. “It happened so quickly that by the time I noticed, my back was on the ice. This kind of thing could happen and we are pretty good at recovering from that kind of incident.”

Pechalat and Bourzat showed improvement since the Trophée Bompard in their short dance set to three Samba rhythms. The French performed with confidence and maintained high energy until the end. The European champions earned a level four for all elements, except for the side by side step sequence (level three), to score a season’s best with 68.68 points.

“This program is very challenging physically, with really difficult steps,” Pechalat pointed out. “There is no time to rest.”

Canada’s Kaitlyn Weaver and Andrew Poje once again looked strong in their Rhumba and Samba. The Rhumba patterns were both a level four as was the lift and twizzles. The side by side circular garnered a level three. The Canadian silver medalists finished fourth at 66.24 points.

“We feel we did the best we could do,” Weaver told the press. “We got a personal best score, so we can’t complain. Our second (Rhumba) pattern here went great, so after that we were able to let it go and enjoy the performance. The crowd was going wild and it helped maintain the energy and helped the performance. You feel like you can touch the audience and we can see people’s eyes.”

“It is our fourth competition in seven weeks and it is a little daunting,” Weaver explained, “but the season goes up as it goes on. It helps us work on increasing the levels.”

“We feel this is our break-through season,” added Poje. “It started at the end of last season when we placed 5th at the World Championships. It helped build our confidence then and over the summer going into the season, and to show that we belong in the top. We gained a lot of experience performing, so now we let the program go and see where it takes us, rather than concentrating on the elements. We want to perform until the end of program.”

USA’s Maia Shibutani and Alex Shibutani had the same levels as the Canadians and also executed their elements very well. They are not far behind in fifth place with 65.53 points.

“We feel this was the best skate of the year and the best score,” said Alex Shibutani. “We felt very confident and relaxed. It really helped that we had a warm up with Meryl and Charlie (Davis and White).”

“We did a lot of changes after NHK,” Alex Shibutani explained. “We changed the circular steps and transitions in the second half of the program. We’re still working on connecting with the audience and on Latin movements. We feel we’re moving into the right direction.”

Ekaterina Bobrova and Dmitri Soloviev of Russia came in sixth at 64.05 points. The team from Moscow gave a lively performance, however, it cost them that the side by side circular steps were only a level two.

“We have our marks and the judges have their marks,” commented Soloviev. “We need to work on their marks, I guess. The performance felt really good, but apparently we have some technical issues. We’ll look at that after the competition. There is no reason for us to be upset. There is still the free dance to come.”