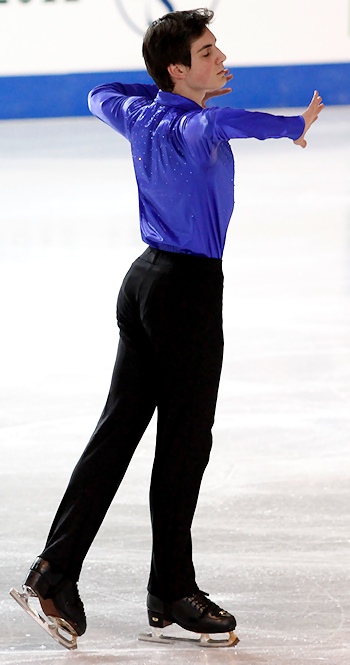 USA’s Joshua Farris confirmed his good form from the Junior circuit to capture the Junior Men’s Short Program ahead of teammate Jason Brown. Han Yan of China is currently third.

Skating to the romantic Clair de Lune, Farris nailed a beautiful triple Axel, but then did a triple flip-double toeloop combination instead of the planned triple-triple. The triple Lutz out of steps was solid, and the spins garnered a level four. He scored 72.99 points, almost three points short of his seasons best.

“I opened with a great triple Axel, Farris noted. “Probably one of the best I’ve done in competition this year. I did my triple flip but fell out of the circle a little bit and I did a double toe to have a nice skate. My spins were great. I also did a really good Lutz. Overall, I felt really good about the program. It felt very easy and over my feet.”

“I feel much more confident,” said the 16-year-old. “I was focused on myself instead of others this time. That is something I’ve done all year.”

Brown put out an expressive Tango program to Grand Guignol that featured a double Axel, a triple flip-triple toe, and a triple Lutz. His spins were fast and well centered, and he picked up a new seasons best of 68.77 points in his Junior Grand Prix Final debut.

“I felt really good about it,” said the 17-year-old of his performance. “I stayed focused. I tried to use my excitement to my advantage and express to the audience how much fun I was having. Hopefully they felt that way.”

“I have improved in my program components and my skating skills,” Brown explained. “I have gotten faster and am more confident in what I do. I think my spins have improved and the speed into my jumps.”

However, Brown decided not to risk the triple Axel.

“It’s coming,” he promised. “It’s one of those jumps where I keep thinking it’s coming and it’s coming. Every day I think it gets closer. We were thinking about doing it in the short but decided not to. I’m not planning to try it in my free skate.”

Yan was one of the top favorites following his two strong victories in the Junior Grand Prix events. The Chinese national champion popped the opening triple Axel, but recovered to pull off a triple flip-triple toe combination and a triple Lutz in his program to Waltz No. 2 by Dmitri Shostakovich. He had good flow in his program and interpreted the music well.

The 15-year-old was disappointed with this performance and his score of 64.23 points, almost eight points below his seasons best of 72.07 points.

“I missed the take off,” Yan explained of the Axel.

The defending Junior Grand Prix Final silver medalist denied feeling pressure, but admitted that his health was not the best. He was coughing badly during the press conference.

“Yes, I caught a cold with fever and cough,” he confirmed.

Russia has a new junior talent in Maxim Kovtun, a musical skater with strong jumps. The triple Axel was no problem for the 16-year-old from Ekaterinburg, nor was the triple Lutz. However, he watered down his combination to a triple toe-double toe and the change camel spin merited only a level one. He placed fourth (63.65) with his routine to a Russian piece of music entitled Murka.

“It was very easy to skate on this ice,” offered Kovtun. “The audience was very supportive, so it was easy to relate to them. I don’t know what went wrong [on my combination]. It (the triple toe) is my easiest jump. I even do quads, but I miss it all the time in competition.”

Hino’s triple Axel was a little shaky, and he stepped out of the triple Lutz. However, the Japanese junior champion hit a triple loop-triple toe combination and earned levels 3 and 4 on his spins. Overall, the program to the Russian Sailor’s Dance appeared a bit empty in between the elements.

“I wasn’t so happy about today’s performance because I had some mistakes, but at least I didn’t fall,” noted Hino. “I was happy because I did a triple Axel without any mistakes.”

Tanaka stumbled badly out of his triple Axel and also touched down on the triple Lutz. His combination spin was slow and looked labored, however, the reigning World Junior silver medalist still earned a level four while the other two spins were a level two. His best element was the triple flip-triple toe combination.