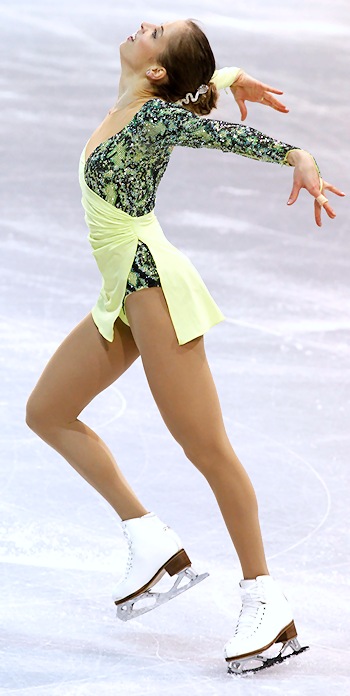 Carolina Kostner of Italy performs to "Allegretto" from "Trio No. 2" by Dmitri Shostakovich.

Kostner turned in an excellent performance to an Allegretto by Dmitri Shostakovich. She not only landed her jumps – triple toe-triple toe, triple loop, and double Axel – but earned a level four for two spins and a level three for the footwork. The three-time European Champion also collected a lot of positive Grades of Execution (GOEs) for her smooth elements, and impressed with innovative choreography to score a season’s best of 66.43 points.

“As I was getting off the ice, I still did not realize that I had finally performed the program as I wanted to,” said the Italian. “I have been practicing the program over and over, but today was the best performance.”

“Going into the Final, my goals were to not have any regrets,” said the three-time World medalist. “I was actually quite nervous going into the six minutes (warm up). I didn’t really find my rhythm in that time, so I just tried to forget about everything and do like I did in practice many times.”

The ambitious Suzuki went for a triple flip-triple toe for the first time, but doubled the toe and stepped out of it. The 2009 Grand Prix Final bronze medalist came back with a solid triple Lutz, double Axel, and three level four spins. She trails Kostner by nearly five points with 61.30.

“Before the competition, I was not thinking about trying a triple flip-triple toeloop combination, but after I came here, I felt much better about it and it was the first time I tried to do it in competition,” the 26-year-old commented. “Now, I could not perform it cleanly and I am mortified by that, but I want to try my best for tomorrow and move the audience’s emotions with my skating.”

Leonova looked confident in her program to Sirens and Pirates of the Caribbean, completing a big triple toe-triple toe combo, the double Axel, and two level-four spins. However, the flip was a little tight and received a couple of minus one GOEs, and the combo spin was only a level two. The Russian silver medalist scored 60.46 points.

“My practice this morning did not go well, but I regrouped for the short program and I am very pleased with the performance,” said the 21-year-old. “I did all my jumps, but I am not quite sure what happened on the comb o spin. I will review the protocol and hopefully fix it.”

Leonova didn’t have much time to prepare for the Final as she had competed at the last Grand Prix event in Moscow end of November.

“I rested a bit after Rostelecom Cup, and then continued preparing for the Grand Prix Final in my usual relaxed rhythm,” she explained. “I love performing to the audience and I love the reception here in Quebec.”

Skating to La Vie en Rose, USA’s Alissa Czisny fell on the triple loop, but remains close to the podium at 60.30 points in fourth place.

“Besides the one jump I felt the program was good, but the loop didn’t happen today and I’m kind of disappointed with that,” said the two-time and current U.S. champ. “I was really trying to focus on each element in the program. The fans here deserve a great performance.”

“There is definitely pressure,” she admitted. “It is a good experience for me going into a competition defending, learning how to defend a title.”

Russia’s Elizaveta Tuktamysheva led the Grand Prix standings after two victories in the series, but her Tango short program didn’t go so well in the Final. The 14-year-old prodigy landed her triple Lutz-triple toe combo, but doubled the loop and stumbled on it. She also stepped out of the double Axel.

“Mistakes happen,” noted the 2011 Russian Junior champion. “I skated two clean short programs in the Grand Prix, and you can’t always skate clean. I could have skated better today but making the Final alone was already a big victory for me. Maybe I was a little too nervous, more nervous than usual.”

“For the free skating, I just want to do my best and do what I didn’t do today,” Tuktamysheva added.

There are only five Ladies competing as Japan’s Mao Asada withdrew from the competition Thursday due to a family emergency.