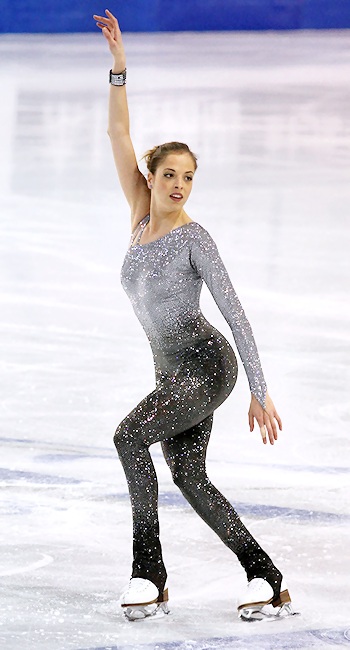 Kostner wasn’t as perfect as in the short program, but made no big mistake in her expressive program to Mozart’s Piano Concerto No. 23. She landed a double Axel-triple toeloop combination and four more triples, albeit some landings were shaky. She also singled the first Axel. The World bronze medalist earned a seasons best score of 121.05 points and accumulated 187.48 points. Kostner, 24, now has a full set of medals of each from the Grand Prix Final.

“I wish I would have skated better,” said the Italian. “My short program went so well. It was a fight today. At first I was upset at the little mistakes I made on the loop and flip until the Axel, then I thought I have nothing to lose now and it’s all or nothing. I am glad that I didn’t let myself go.”

Suzuki started well into her Die Fledermaus free program, hitting a triple Lutz (touched down with her hand), double Axel-triple toe, and a triple loop, but then she wobbled on the second loop and stepped out of the second Lutz. The Japanese earned 118.46 points which totaled 179.76 points overall. For Suzuki, it was her second medal in the Grand Prix Final after a bronze in 2009.

“The result is very good and I am happy with it,” said the 26-year-old, “but the performance itself was disappointing. During today’s practice time I felt very good and was hoping to continue like that in the competition. But during the six minute warm up my body was stiff,. I was trying to be positive, but I did not succeed.”

Leonova, 21, opened with a solid triple toe-triple toe combination and landed three other triple jumps, but crashed on the triple Lutz. The Russian received 115.96 points and was ranked fourth in the free skating. In the end she was able to hold on to the bronze, her first Grand Prix Final medal, at 176.42 points.

“I am very disappointed about the Lutz, as after Rostelecom Cup my coach and I changed the approach going into the jump to feel more comfortable in order to have the correct edge,” explained the two-time Russian national silver medalist. “After the fall, I just concentrated on the rest of the program.”

Teammate Elizaveta Tuktamysheva finished fourth in her debut in the senior level Final. The 14-year-old came back from a disappointing short program and reeled off a triple Lutz-triple toe combination, as well as a triple flip, loop, and Salchow, but she stepped out of the solo Lutz and two-footed the double Axel-triple toe combination. The 2011 Russian Junior champion, who was ranked second in the free skating, pulled up to fourth at 174.51 points.

“I realized (after the disappointing short program) that I had nothing to lose and I had to just skate well for myself,” said Tuktamysheva. “I changed my costume from black and red [to green] to help feel the latin music. I think my best element was the triple Lutz-triple toeloop combination, while the double Axel-triple toeloop was the worst one.”

USA’s Alissa Czisny had a rough performance. She fell on a triple toe and double Axel, and made errors on other jumps as well. Four jumps were deemed underrotated, and the costly errors resulted in a fifth place finish overall (156.97).

“Obviously, today was not my best and I’m disappointed in that,” acknowledged the U.S. national champion.

“I learned to be tough and push through some pain,” she added, referring to a sore left ankle that she had tweaked in practice on Thursday. “[The ankle] will be fine. It’s something I did in practice here. It’s something that couldn’t be made worse skating on, but it certainly wasn’t easy to skate on.”