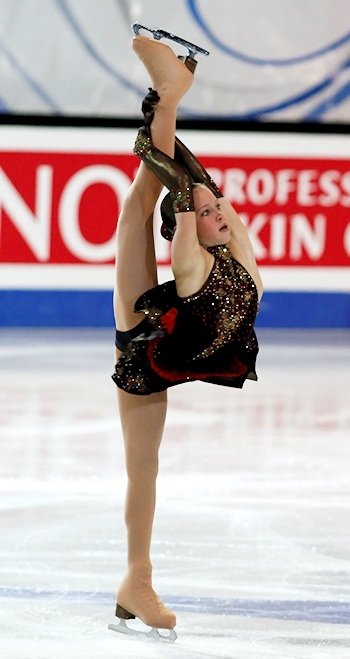 Julia Lipnitskaya of Russia performs to “Dark Eyes” for her Short Program in her Junior Grand Prix Final debut.

Russia’s Julia Lipnitskaya dominated the event and skated to a four-point lead over her teammate Polina Shelepen and USA’s Vanessa Lam.

Lipnitskaya is the next wunderkind from Russia. At age 13 she is remarkably expressive and has solid jumps up to the triple Lutz and shows off great flexibility in her spins. She skated to Dark Eyes (which reminded some people of a young Sasha Cohen) and landed a triple toe-triple toe combination, a double Axel, and a triple Lutz. The Muscovite earned 59.98 points.

“I can do better than that,” said Lipnitskaya . “For example the combination (triple toe-triple toe) could have been better and I wobbled in the footwork. Everything else was quite good. However, I skated much better at the Junior Grand Prix in Italy (she achieved a season’s best of 63. 71 points). Technically, it was a much better performance than today.”

Performing to Marco Polo by Ennio Morricone, Shelepen went for a triple Salchow-triple toeloop, but underrotated the last jump. Her triple Lutz and double Axel looked smooth and she earned a level four her three spins in her program. Shelepen was happy to receive a new season’s best of 54.99 points. She has grown taller and looks more elegant on the ice than ever before.

“I wish I had gotten 55 points,” the 16-year-old said with a smile. “I felt the program was skated clean and with confidence.”

“I don’t know what was different from the previous performance,” Shelepen said, referring to the JGP Brasov Cup. “I have to look at the protocol, but maybe the components were higher.”

“The goal for this Grand Prix Final and for any competition is always to skate at maximum ability,” she concluded.

Shelepen hopes to do well at Russian Nationals in order to qualify for the European and World Figure Skating Championships.

Lam’s program to Time to Say Goodbye included a triple flip-double loop and level-four spins, however, the triple Lutz received an edge call and overall her jumps appeared small. The 16-year-old picked up a season’s best of 54.34 points.

“I felt the warm up went really well for me,” said Lam. “I was pacing the performance and felt I presented the program well.

“I really worked on my transitions and they felt better here,” she said of her program. “The goal for the free skate is to land jumps.”

Lam is enjoying her debut in Quebec. “It’s so amazing here. Everything is so pretty. To be here at this event is so exciting and I’m looking forward to watching the seniors after I’m done competing.”

Risa Shoji of Japan came in fourth at 51.33 points. She hit a triple Salchow-triple toeloop combination, however, the Lutz was underrotated and her spins merited a levels three and two.

“This is my second time at the Junior Grand Prix Final,” noted Shoji. “It was even harder to prepare mentally because last year I was here without feeling any fear, but this year I thought about lots of other things.”

“I had several small mistakes today,” the 15-year-old added, “but my overall performance level wasn’t so bad, so I’m pretty happy with myself. When I completed my first big element triple Salchow-triple toe I was surprised to succeed because I didn’t have so much confidence in this element.”

Polina Korobeynikova of Russia and last year’s silver medallist Zijun Li of China disappointed. Korobeynikova stumbled on her triple flip and doubled the Lutz, while Li fell on both the flip and triple Lutz. They finished fifth and sixth, with 45.24 and 43.10 points respectively.