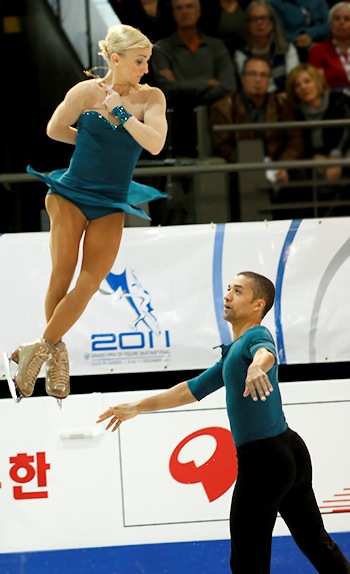 Germany’s Aljona Savchenko and Robin Szolkowy perform a throw triple flip during their long program at the 2011-12 Grand Prix Final of Figure Skating.

Yet the Germans are still hungry for more and they are ready to push the limits to achieve their ultimate dream – the Olympic gold medal in Sochi 2014.

For this season, coach and choreographer Ingo Steuer came up with another brilliant idea: Pina, set to the soundtrack of the movie by the same name that tells the story of modern ballet choreographer Pina Bausch.

The routine incorporates dance moves that are new to pair skating, and the program has been receiving rave reviews since its debut at Skate America in October.

“It is a tricky thing,” explained Szolkowy. “When you do a program like this, you have to go all the way and do it very well or it will be crap.”

Obviously, Savchenko and Szolkowy and Steuer have gone all the way. The skaters took modern dance lessons over the summer and worked hard to transfer the new moves on to the ice. The result is a beautiful program that reflects different moods and emotions, and is not a second boring to watch.

The short program to Angels and Demons is s not as accessible as it is full of contrast.

“This is a very challenging program, and for some people it might be too much,” Steuer explained. “The program is about fighting from the first to the last second and there has to be a sharp contrast even if they do the elements together.”

On the other hand, this kind of program shows the versatility of the pair that can do anything from romantic to eccentric.

However, the team and their coach are also looking for new technical challenges and have started to work on the throw triple Axel. Thus far, only one other team has landed this element successfully in competition. Rena Inoue and John Baldwin of the USA accomplished the feat in 2006.

Savchenko and Szolkowy risked the throw triple Axel at Skate America and NHK Trophy, but both times she took a hard and painful looking fall. In competition practice, a couple of nearly cleanly landed throw triple Axels were observed at NHK Trophy, Rostelecom Cup, and the Grand Prix Final.

“Considering the short time we have been doing the throw triple Axel, we have come very far,” Savchenko noted. “We don’t only want to show new programs, but also new elements.”

“At first this might backfire, but then it will move forward,” she added. “We are strong enough for the triple throw Axel. We want to do something new and continue to develop. We can do all the other triple throws and we want to do more.”

“You are never too old to learn,” Savchenko pointed out.

Steuer decided not to let them risk the throw at their last Grand Prix event in Moscow and in the Final, but that doesn’t mean that they have given up on it.

“Following the NHK Trophy, we focused on training the programs as a whole and less on the throw triple Axel, but we continue working on it,” confirmed Steuer.

The element they did in practice in Quebec was only slightly two-footed. The throw triple flip in the short program then was so high that Savchenko stepped out on the landing.

“The throw was almost too perfect,” Szolkowy commented.

“Someone needs to tell Aljona that she has to stop after three rotations,” Steuer said, grinning. “We probably should have gone for the throw triple Axel. The right feeling was there.”

Because of the stumble, the Germans were ranked second in the short to Russia’s Tatiana Volosozhar and Maxim Trankov, however, they edged out the Russians with their near-perfect free skate.

The Germans know that they have very dangerous rivals in Ukrainian-born Volosozhar and Trankov who just teamed up in the spring of 2010. One little mistake can make the difference. With new elements such as the throw triple Axel, the Germans want to be a step ahead.

“We have to start now if we want to have this element ready for the Olympic Games,” Steuer explained. “We can imagine that until 2014, others will try it and then it would be too late to start. Obviously, the throw triple Axel will be useful only if they land it, but we still have two years of time.”

In these two years, the skaters want to pace themselves in the right way. Doing the three Grand Prix events plus the Final on three different continents was a challenge.

“For me it was about surviving,” Szolkowy, 31, said. “The rhythm of the three Grand Prix and the location of the competitions were hard. Now I need to find new energy mentally over Christmas and the New Year holidays.”

The team will most likely skip the German Nationals in early January, but they will do some shows in December. They want to be fresh for Europeans and Worlds.

Overall, Savchenko and Szolkowy look better than ever.

“We still have a lot of potential in our programs,” announced Savchenko, 27.

The success this year with excellent performances at the Rostelecom Cup and in the Final gives confidence, not only for the rest of the season, but beyond.

“The Russian air is good for us and that makes me positive for Sochi,” Steuer said, smiling, referring to winning Worlds in Moscow and the Rostelecom Cup.