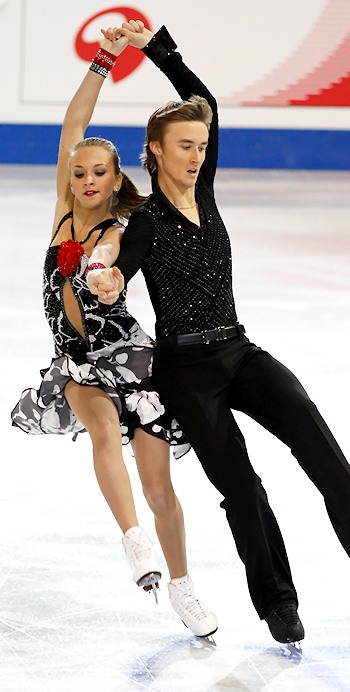 Victoria Sinitsina and Ruslan Zhiganshin of Russia perform the Cha Cha and Samba for their Short Dance.

Victoria Sinitsina and Ruslan Zhiganshin of Russia danced to a confident lead, while teammates Anna Yanovskaya and Sergey Mozgov placed second ahead of Ukrainians Maria Nosulia and Evgen Kholoniuk. Russia’s Alexandra Stepanova and Ivan Bukin finished fourth as Bukin fell on the twizzles.

Sinitsina and Zhiganshin were the surprise silver medalists in the Final last year. This year they won both their Junior Grand Prix events and were top favorites alongside Stepanova and Bukin.

Sinitsina and Zhigasnhin put out a lively and technically solid Cha Cha and Samba. The team from Moscow earned a level four for both Cha Cha Congelado sequences, as well as the twizzles and rotational lift. They scored 60.47 points, just short of their personal best of 61.74 points.

“For me, this was our second best performance of the season,” said Sinitsina. “The [side by side] footwork wasn’t perfect today. We would like to win the Final this year. This is something we have been working for.”

The team lost one point for an extended lift.

“Yes, we held it too long and lost one point,” Zhiganshin admitted.

Their Cha Cha and Samba contained level-four twizzles and a rotational lift, and they earned 56.22 points.

“We could have skated better and this performance wasn’t our best,” said Mozgov, “but overall we are pleased with our performance. Our other skates this season were better, but regarding our world ranking, this is our best result so far.”

Like most teams, Nosulia and Kholoniuk chose a Cha Cha and Samba for their Short Dance. The Ukrainians were awarded a level four for the first Cha Cha sequence, the twizzles, and the lift to score 53.95 points.

“Of course we can skate better as there is never a limit to perfection and we would never say that we were perfect,” Nosulia pointed out. “Tomorrow is my birthday and we we’ll go out there ready to fight.”

Kholoniuk revealed that health problems have been bothering the couple.

“I am suffering from a stomach upset,” he said, “and Maria caught a cold.”

Stepanova and Bukin were favored for another podium finish, however, they came in fourth as Bukin fell on the twizzles. The twizzles received no level. The Cha Cha sequences were strong and both a level four, while the side by side footwork garnered a level two. The current Junior Grand Prix Final bronze medalists scored 52.48 points.

“I think I lost concentration,” explained Bukin about the fall. “My skate lace felt loose. The program was going well until the fall.”

USA’s Alexandra Aldridge and Daniel Eaton performed the Cha Cha and Mambo and had a good start with their curve lift, however, the first part of the Cha Cha was somewhat wobbly. They came in fifth.

“It was not our best, that’s for sure,” said Aldridge. “We started off really strong. The lift was great and the first of pattern was pretty good, but then we had a stumble. Our choreography got a little sloppy, but we finished as strong as we could.”

“We’re going to reset our minds and get ready for the free dance,” said Eaton. “We want to do what we are good at doing.”

“The free dance is definitely our stronger program,” added Aldridge. “We love doing the Irish dance and the crowd loves it. It’s good that we have that to look forward to.”