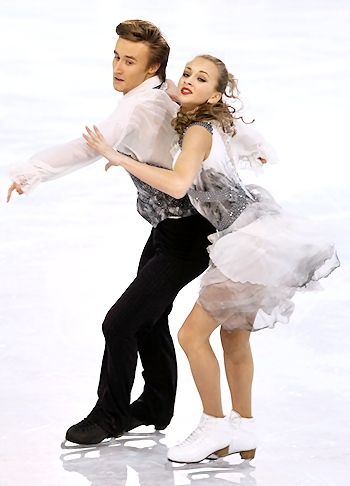 Russia’s Victoria Sinitsina and Ruslan Zhiganshin perform to music from “Phantom of the Opera”.

Russian junior dancers swept the podium just as they had last year. Victoria Sinitsina and Ruslan Zhiganshin danced to the gold, followed by Anna Yanovskaya and Sergey Mozgov and Alexandra Stepanova and Ivan Bukin.

Sinitsina and Zhiganshin continued their dominance from the Junior Grand Prix series with another excellent performance of their Phantom of the Opera free dance.

The young team from Moscow executed their difficult elements effortlessly and never lost speed throughout the program. They were not only strong technically with a level four for lifts, twizzles, and the spin, but also have grown as performers. Their elements garnered mostly plus 2 Grades of Execution (GOE) from the judges.

Sinitsina and Zhiganshin earned 87.08 points and totaled 147.53 points to take the gold after winning the silver one year ago.

“This means a lot to us,” offered Zhiganshin. “It is a motivation for us to go on and not to stop where we are now. This season we still have two important competitions to come, the Russian (Junior) Nationals and Junior Worlds. We want to do well there.”

Yanovskaya and Mozgov had chosen a Flamenco to Mala Luna, and earned level fours for five elements, but the step sequences were a level two. The Muscovites, who skate in their first season as a team, scored 80.39 points and were ranked third in the free dance. Overall they remained in second place at 136.61 points.

“We skated brilliantly today!” said Mozgov. “We will work on our technique and gelling as a team. Our next competition is the first Youth Olympic Games in Innsbruck.”

“We have only been together since spring, so we credit our coaches for their excellent work and preparation,” Yanovskaya added. “We can’t think of anyone else who made that much of a progress in that short time.”

Stepanova and Bukin came back from their faulty short dance with a strong free dance to Live and Let Die by Paul McCartney. Their dance had good flow and included interesting transition moves. The son of 1988 Olympic Ice Dance Champion Andrei Bukin and his partner picked up a level four for the twizzles and the lifts, a level three for the circular footwork, and a level two for the midline steps and the combination spin.

With 82.69 points, Stepanova and Bukin had the second-best free dance and pulled up from fourth to third at 135.17 points. It was their second consecutive bronze medals in the Junior Final.

“Last year we didn’t expect to be here at all and we didn’t really come to compete with anybody,” Bukin noted. “This year was different and we wanted to be contenders. Unfortunately, because of the error [in the short dance] it didn’t quite happen.”

USA’s Alexandra Aldridge and Daniel Eaton turned in a lively performance to Lord of the Dance. They had the same levels as the winners, but earned less points for the execution and in the components. With 129.01 points, they moved up one spot to fourth.

“The free dance went well,” Aldridge commented. “We went into it thinking that placement doesn’t matter. We just want to skate the way we know we can skate and show people why we love this sport. This program really portrays that. We just had fun with it.”

Ukrainians Anastasia Galyeta and Alexei Shumski made no major error in their routine to a modern remix of Tchaikovsky music, however, their footwork sequences garnered only a level one.

“We need to work more on our technique and skating skills so that we can get higher levels on our elements,” acknowledged Galyeta.

Teammates Maria Nosulia and Evgen Kholoniuk dropped from third to sixth after Kholoniuk fell on the twizzles and Nosulia slipped in the circular footwork.

“Today’s performance is disappointing, maybe because we are both really sick,” Nosulia explained. “Yesterday was my birthday and we did not do much because of our illness. This is our first Grand Prix Final for us, so this is a good learning experience.”