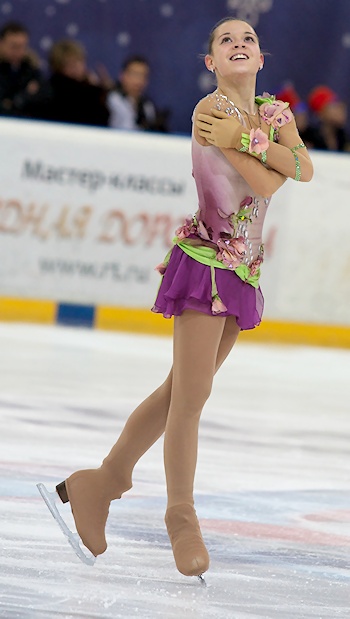 The Ladies Long Program at the 2012 Russian National Figure Skating Championships was a nerve-racking event, but in the end, overnight leader Adelina Sotnikova was able to withstand the pressure to capture her third title. Julia Lipnitskaya won the silver, while Alena Leonova rose from fifth place to win the bronze.

Skating right after Lipnitskaya , who earned loud ovations from the crowd, Sotnikova seemed to be handling the pressure well as she reeled off a triple Lutz-triple loop combination (the second jump was downgraded by the technical panel), a triple flip, a double Axel-triple toe loop combination, and another triple.

At that point, the defending champion seemed to relaxed a bit and allowed a smile to appear on her face. Her performance to Die Liebertraum began to give an impression of serenity which was lacking from her previous performances of the program. The serenity, however, came at a cost: the skater stumbled on her three final jumping passes. She finished second in the free (125.06), but was able to maintain the overall lead with 193.71 points.

“Yesterday I said that I was happy because I did everything I planned,” the 2011 World Junior Champion told the press. “It’s a pity that I cannot repeat it today. I started strong, landed all the most difficult jumps, but then the things went wrong. I cannot say that I relaxed too much after the second flip. I guess I simply became too emotional, or may be I was simply too tired.”

“It has not yet dawned on me that I am a three-time national champion,” the 15-year-old admitted. “It is definitely a great honor, but I still think that I should have done even better. I should have skated that second part of the program stronger to prove that I can do it clean.”

The skater claimed she was not affected by the ovations earned by Lipnitskaya .

“I did not pay much attention to it,” said Sotnikova. “I pretended it was for me and put it right out of my mind.”

When asked to compare her performance to the previous events, the skater was not able to give a definite answer.

The student of Elena Buyanova will now focus on preparations for the upcoming Youth Olympic Games in Innsbruck.

Lipnitskaya continued with her string of confident performances. The Junior Grand Prix Final champion made no major mistakes in her entire routine to Nino Rota’s Romeo and Juliet score. Her only negative Grade of Execution was for a wrong take off edge on her triple Lutz, however, the remaining six triple jumps were flawless.

“I am very happy with my performance,” said the 13-year-old. “It was my season’s best. I was not nervous at all. For me, this competition was not about placements. I just knew that I had to take the ice and skate clean. I did it.”

“I have not seen the protocols yet,” Lipnitskaya responded when asked if she was upset about not winning. “I did win the long. In the short, I had easier content so I am fine with it.”

The young skater believes that she has taken after her mother in character, and was at a loss to explain how she can maintain calmness under pressure.

“I do not know how I do it,” she admitted. “This is just something I just do.”

The native of Ekaterinburg said that she began skating at the edge of four.

“My mother saw that I was very flexible and she wanted to sign me up for something that could be of use,” Lipnitskaya explained. “There was no rhythmic gymnastics nearby, and she ruled out artistic gymnastics as she felt it was too dangerous. So figure skating it was.”

Leonova was once again able to make up for the mistakes in the short program by giving a strong performance in the long. This time, however, her routine was not as flawless and electrifying as the one she delivered at the same venue last season. In the end, she only landed four triple jumps, however, it was enough for her to win her third consecutive national championships medal – a bronze (178.15).

“The only thing I can say is that I have done everything I could,” the 21-year-old stated. “I am relieved that I survived till the end of the program. I am completely exhausted, both emotionally and physically.”

The student of Nikolai Morozov claimed that she never intended to withdraw from the event despite rumors that were circulating prior to the event.

“In Canada, I had heard that my coach almost arranged a bye for me,” Leonova explained. “I was very surprised. I had always intended to compete at nationals, so as soon as I came back, I told him as much.”

“I did not even bother about placements,” she added. “I just want to show good skating. It never occurred to me to skip the championships. I see no reason why I should. I did as well as I could and I am proud of it. I certainly do not regret it.”

Elizaveta Tuktamysheva finished fourth in the free program with a flawed performance to Latin medley. She nailed two opening jumping passes, a triple Lutz-triple toe loop combination and a solo triple Lutz, but fell on the following triple flip. The 15-year-old also fell on a triple Salchow attempt at the end of the program. Nevertheless, she pulled up to sixth place overall (174.40).

“I do not know what happened,” said the 2011 Russian Junior champion. “I guess I was tired. In all my career in figure skating, I have never had so many competitions before the Russian Nationals. At first, it was easy for me to skate, but then I realized that I was running out of steam.”

“I hope that I will be able to take a rest now, even though my coach has already told me that he expects me at practice first thing in the morning on December 31st,” Tuktamysheva said. “I do hope it is a joke.”

Ksenia Makarova was only credited with one clean triple jump – a triple loop – in her routine, and finished sixth in the long and fourth overall (175.49).