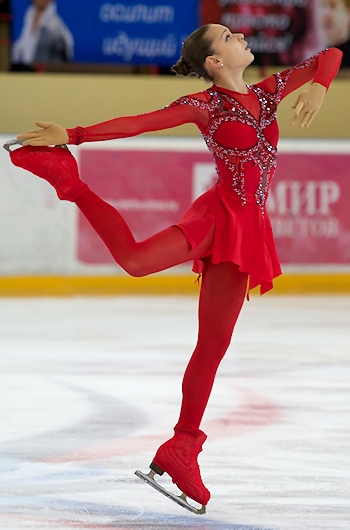 The second day of the 2012 Russian National Figure Skating Championships continued with the Ladies Short Program, which was expected to be the most competitive event. Of the 18 competitors, 16 worked on a a triple-triple combination during the practices in Saransk. Twelve skaters made an actual attempt at the jump combination during the performance, with eight of them approved by the technical panel as fully rotated.

A ‘comeback’ might be a strange word to apply to a 15-year-old, however, it fits Sotnikova’s situation perfectly. After hit-and-miss performances at the ISU Senior Grand Prix events, many were quick to write her off as another skater succumbing to puberty. However, the two-time and defending national champion proved the critics wrong and delivered a clean short program.

The student of Elena Buyanova excelled on all counts. Her intricate Bolero routine had the highest base value among all competitors, albeit the second jump in a triple Lutz-triple loop combination was marked as underrotated. Nevertheless, the quality of their execution was among the best of the night.

What really set Sotnikova apart from the rest of the field was the amount of details in the choreography and the level of commitment it required. After she landed all her jumping passes, the skater was finally able to relax and deliver the remaining elements to full impact. She earned 68.65 (35.70/32.95) points and an overnight lead of four points.

“Today I have no quarrels with myself,” said Sotnikova. “I proved that I can do the hardest elements clean. I had a few events in a row where I failed to skate a clean short program. Today I finally succeeded at doing it and I am very happy.”

“This season is a difficult one,” she explained. “I have many Senior events and then the Youth Olympic Games, but right now I am focused on the Russian Nationals. I have to prove that the hopes people rest on me are not in vain. That there was a reason why I was chosen as a face of the Rostelecom Cup ISU Grand Prix event. I have no right to let my country and my national federation down.”

Still, Sotnikova denied being under a lot of pressure in Saransk.

“I think I can say that I am fairly used to competing at Russian Nationals,” she said. “I had been doing it since 2009, so far it is a part of the course now.”

An even more impressive comeback was staged by Makarova. The 2010 national champion struggled at her Grand Prix outings, often missing two out of three jumping passes in her short program to Maria and the Violin’s String. In Saransk, she hardly erred.

The 19-year-old nailed the opening triple toe loop-triple toe loop combination, however, the subsequent triple loop out of steps was marked as underrotated. Nonetheless, with two jumping passes out of the way, the skater floated through the rest of program, fully immersing herself in the music. The student of Evgeni Rukavitsin earned 64.30 (30.90/33.40) points.

“I am very happy with my performance today,” said Makarova. “I took the ice and I delivered everything. I did everything I have been doing for years and I did it well. I proved that I can compete at the top level. I think a lot of credit should go to my psychologist Rudolf Zagainov. I feel much more comfortable now. He teaches me how to fight. I have also worked with Viktor Kudryavtsev in Moscow.”

Makarova said that the main goal is to become ‘robot-like’ in a good sense.

“I will skate clean and avoid being nervous,” she offered. “I keep a diary now, and every evening I write down all good and bad things which happened to me during the day. It helps me to get rid of both negative and positive emotions and I feel better.”

Lipnitskaya , who won both qualifying Junior Grand Prix events and the Final by considerable margins, was rock solid in her performance to Dark Eyes. She landed a triple toe loop-triple toe loop combination and a triple Lutz out of steps, stunning the audience with her phenomenal spins and flexibility. The student of Eteri Tutberidze received 63.11(33.93/29.18) points.

“I was not nervous today before the performance,” said Lipnitskaya . “I am not competing for a certain placement today. I just have to skate clean. Naturally, I would love to win a title, but it is not my goal right now. The main focus of the season is to qualify for the World Junior Championships.”

The 13-year-old lists Italy’s Carolina Kostner and teammate Adelina Sotnikova as the skaters she looks up to.

“Adelina had some troubles with jumps this season, but she still keeps fighting till the end. It deserves a lot of respect,” she explained.

Skating to Seven Years in Tibet, Sofia Biryukova fought for the landings of her jumping passes and came out victorious. The student of Viktoria Volchkova was smooth and lyrical in her interpretation of the music, but she lacks the command displayed by the skaters who finished ahead of her. She received 60.95 (31.36/29.59) point for a fourth-place finish.

Alena Leonova unexpectedly stumbled out of the opening jump of her triple toe loop-triple toe loop combination (which has been her most consistent element this year), but was able to add a double toe loop to the planned solo triple flip. Though the mistake took some excitement out of her “Pirates of the Caribbean” routine, the characteristic moves and quality of her interpretation made her performance one of the highlights of the event. The 2012 ISU Grand Prix Final bronze medalist earned 59.95 (27.60/32.35) points to finish fifth.

“I missed the triple-triple combination because I failed to check the rotation on the first jump,” explained the 21-year-old. “I believe the mistakes are caused by the fatigue after competing at four events this fall. The Grand Prix Final in Canada was especially tough, both physically and mentally. I really gave it my all in Quebec. I think I have not fully recovered from that performance and from all the travels yet. I have very little strength left in me, but I hope to skate better in the long program tomorrow.”

Elena Rodionova rounds up the top six. The 12-year-old debutant delivered an ambitious and exuberant short program which featured a triple Lutz-triple toe loop combination and a triple flip to score 59.10 (33.07/26.03) points.

Polina Shelepen fell on both triple jump attempts and finished 17th with 45.44 points.