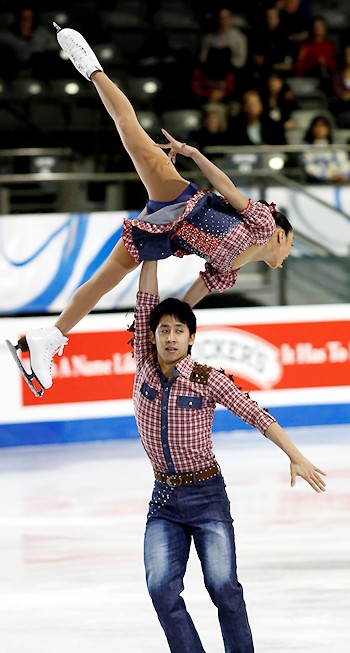 Last year, Sui and Han competed in the Senior Final and claimed the bronze medal, however, they failed to qualify for the Senior Final this year. While the team was disappointed, they found new motivation to do their best in the Junior event, however, it is not that much of a challenge for them.

The two-time World Junior Champions had no trouble with the junior elements: their level 3 double twist was very high, and both the side by side double Lutz and throw triple loop were solid. The skaters from Harbin picked up a level four for the lift, the spin, and the death spiral and scored 57.43 points.

“We think competing here is a good practice for us for the future,” said Han. “Obviously we would have preferred doing the senior elements as they are at a higher level.”

Han added and announced that they plan to do both a quad twist and quadruple throw Salchow in the free skate..

Bobak and Beharry, who teamed up just 10 months ago, are doing quite well in their first season together. The Canadians looked elegant in their program to the Out of Africa soundtrack and pulled off a double twist, throw triple loop, and side by side double Lutz, as well as level-four footwork. Only the double Lutz had an edge call. As a result, they earned a new season’s best with 52.77 points.

“The home crowd is amazing,” said Bobak. “It is a lot of fun to perform in front of them. It is so exciting being here and is nothing like I have ever experienced before. This is one of my favorite programs and doing well feels so great.”

Simpson and Blackmer were new to the Final in this constellation as well, and gave a solid performance to Crouching Tiger, Hidden Dragon. They also produced a throw triple loop and double twist, and their death spiral and pair combination spin were a level four. However, the Americans received an edge call on the double Lutz. They collected 50.91 points – a season’s best.

“From a components standpoint, it felt really, really good,” said Blackmer. “We emoted really well and had a strong connection between us. Overall, it was a great performance. I feel it was an improvement from practice.”

“It felt like what we had been training at home,” added Simpson. “It was so much fun with the Canadians here watching it. It was really easy to skate.”

Simpson has more experience than her new partner as she has already competed in the Junior Final with former partner Nathan Miller.

“I don’t look back as I am focusing on the new partnership,” she commented.

Ekaterina Petaikina and Maxim Kurdyukov of Russia qualified for the first time for the Final. Their program to Sarabande included a double twist, throw triple loop, and difficult lift, however, Petaikina underrotated the double Lutz. The Muscovites placed fourth with 48.75 points.

“We feel excellent!” Kurdyukov exclaimed. “We posted our season’s best score and we feel we skated better than we ever did in practice. It is very important for ourselves to have such a good skate.”

“The ice is very smooth and we felt that the audience supported us and we hope that they’ll come back tomorrow,” added Petaikina. “Our goal coming in was to be in the top three.”

Xiaoyu Yu and Yang Jin of China had no trouble with the double twist and throw triple loop, however, her double Lutz was wobbly and the footwork and the pair spin only garnered a level one. The Chinese are currently ranked fifth.

“It was a good performance for us, we made no major mistake,” Jin said.

“Both (junior and senior events) are a very good experience for us and a great opportunity for us to learn,” he added, referring to competing in both Junior and Senior Grand Prix events this season. “We actually like both junior and senior competitions, but I think we can learn more when we are participating in a senior event.”

Tatiana Tudvaseva and Sergei Lisiev of Russia replaced USA’s Jessica Calalang and Zack Sidhu who withdrew citing injury. Their performance to Russian Folk music was solid, but a little cautious. This may have been in part due to the fact that Tudvaseva’s zipper on the back of her costume broke during morning practice and needed to be replaced.