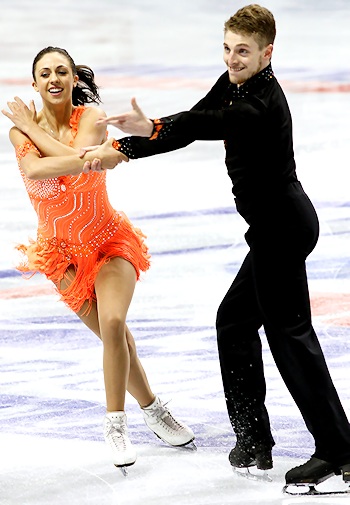 The two teams are separated by a little more than one point, and are both hungry to win the U.S. title tomorrow afternoon.

“We feel really prepared,” said Aldridge, 17. “We stepped up our training for the Final, and we’ve never let up on that pace. All of that work is starting to pay off.”

The leaders, skating the requisite Cha Cha Congelato, edged out Bonacorsi and Mager on the basis of their component scores.

“We’ve really matured as a team this season,” said the 19-year-old Eaton. “We feel more of a connection on the ice—it really is true that the older you get, the stronger you get.”

The Michigan natives skated a feisty number to Mark Anthony’s I Need to Know, and earned a total of 54.42 point for their efforts.

“We had a lot of fire today,” Aldridge said with a laugh. “This was so far our most exciting short dance of the season.”

The reigning silver medalists came to San Jose with one mission—to become U.S. junior ice dance champions. With stronger technical marks than the leaders today, they know that they have a shot to accomplish their goal.

“I’m happy that we skated a good program today,” said 19 year-old Bonacorsi. “I think that we can do a lot more tomorrow.”

“Today was making sure that our levels were there and that we performed with the correct Latin expression,” Mager explained. “We are more lyrical skaters, and tomorrow’s program plays much more to our strengths.”

Finishing in third place after traveling halfway across the globe to get here, were the sibling team of Rachel Parsons, 14, and Michael Parsons, 16. The duo is fresh off a fourth place finish at the Youth Olympics in Innsbruck, Austria, last week.

“It was an amazing experience,” said Rachel Parsons. “It was the best time I ever had, meeting skaters from all over the world. It was so much fun!”

The fun continued this week as the 2011 novice champions made the meteoric leap into medal position on the junior level.

“We wanted to compete here so that we could set ourselves up for Junior Grand Prix assignments next year,” Michael Parsons explained. “Ultimately we would like to skate at Junior Worlds, but for now, we’ll be happy with skating well in this competition.”

Parsons and Parsons scored 50.80 points in this phase of competition.

Finishing in fourth place were Lorraine McNamara, 12, and Quinn Carpenter, 15, with 49.11 points.

Rounding out the top six were Madeline Heritage, 17, and Nathaniel Fast, 20, in fifth, and 15-year-old Kaitlin Hawayek and 19-year-old Michael Bramante in sixth.