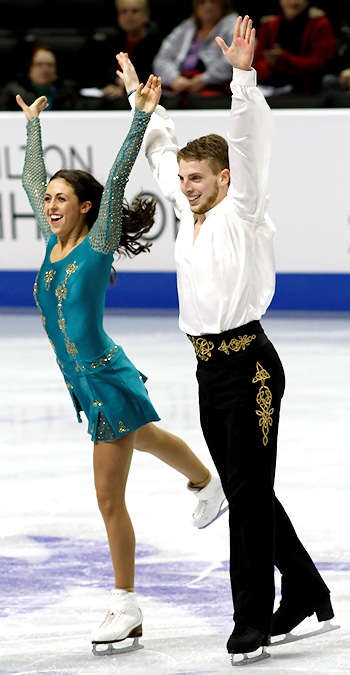 Alexandra Aldridge and Daniel Eaton perform to "Lord of the Dance" at the 2012 U.S. Figure Skating Championships.

“We skated really well today, and the crowd was a big part of that,” Eaton said. “We performed as well as we could have, and I really enjoyed it today.”

The duo was the class of the field, performing with great speed and attack, earning level fours on all elements except the steps. The program seemed to fit Aldridge, 17, and Eaton, 19, like a glove.

“This dance was not our first pick,” Aldridge admitted. “We had a different program, and we just didn’t seem to move well to it. I saw that Lord of the Dance was coming to Detroit, so I Googled some of the videos from the show and liked it.”

But Eaton wasn’t completely sold on the idea.

“I was the person most against it,” he admitted. “I thought that it would be too challenging for us, I don’t know why. But now I think it is the best decision that we made all season because we have connected so well with the music. It’s so much fun to perform.”

The gold medalists earned 142.10 points in the competition.

Settling for the silver medals for the second year in a row were Lauri Bonacorsi, 18, and Travis Mager, 21. Though the runners up had a strong performance, they failed to capture the magic that the winners did this afternoon.

“We put our hearts into it,” said a disappointed Bonacorsi.

Mager added, “Skating with Lauri is my favorite thing about figure skating. We bring out the best in each other as people, and it’s so easy to share that with people when we perform.”

The two-time silver medalists skated to Close to You by Sandra and Tony Alessi, a throwback to the days of Naomi Lang and Peter Tchernyshev. They scored more than seven points less than the champions in the free dance, and finished with 133.73 points overall.

“It felt great to skate so well for everybody,” said the tiny McNamara.

Her baby-faced partner added, “We like to think of each other as one person when we are out there instead of two people. That went really well today.”

The Washington D.C. trained team moved up from fourth place after the short dance to become one of the youngest ice dancing teams to medal on the junior level at the U.S. Championships. In fact, the team is too young to be considered for the upcoming Junior World Championships.

McNamara and Carpenter finished with 126.10 points in the competition, leapfrogging their training mates, Rachel Parsons, 14, and Michael Parsons, 16, to win the bronze medals.

Parsons and Parsons performed well, but appeared a little tired in their To Glory/Enigmatic Soul program. This is the second time in a little more than a week that the duo finished in fourth place—just missing the podium at the Youth Olympics in Innsbruck, Austria, last week. They finished with 123.26 points.