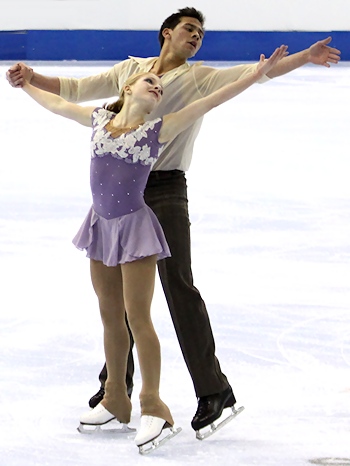 Katherine Bobak and Ian Beharry of Western Ontario perform to music from “Out of Africa” at the 2012 Canadian Figure Skating Championships.

All eyes were on Bobak and Beharry who did not disappoint the modest crowd at the Moncton Coliseum. The new team has progressed quickly and recently won the silver medal at the Junior Grand Prix Final. No other pair in the field even had international experience, so Bobak and Beharry seemed head and shoulders above the field from the start.

To the untrained eye, their Out of Africa program may have looked perfect, but an edge call on their side-by-side double Lutzes did negatively affect their score. Still, the duo earned 51.17 points, in part because of picture-perfect elements like their high lateral double twist and a beauty of a throw triple loop.

“I thought it was as good as we can do in a short,” Beharry said. “Our score was great, and everything was good today.”

“It was all we could really ask for,” Bobak added.

Heading into the free, Bobak and Beharry have established nearly an 11-point lead, which should lessen the pressure a bit and allow them to really perform.

Bobak and Beharry train under coaches Kris and Kristy Wirtz at the Kitchener-Waterloo Skating Club (KWSC), and it was a great night for the club as Orr and Furiano landed in second place after their jazzy short program.

“It was very exciting and we’re very happy with it,” Orr said.

The duo opened their program with a beauty of a double twist and went on to land a throw triple loop. A struggle on the double Lutzes did hurt their mark a little, but with 40.43 points, they managed to edge out the rest of the field for second heading into the free.

“We just want to have an exciting skate,” Furiano said about Wednesday’s free skate. “Skate clean—that’s our big goal—and try to get a new personal best for us.”

Desjardins and Bilodeau are close behind Orr and Furiano with 40.10 points. They also opened with a stunner of a double twist, although they only received level one on their twist, as opposed to the level two twists from the top two teams. They fell on an attempted throw triple loop, but made up some of those points with solid pair elements, including their effortless level four lift.

A third KWSC team, Shalena Rau and Phelan Simpson (WO), finished the short program with 38.82 points. Rau and Simpson, certainly the smallest pair in the field, were charming throughout their Chim Chim Cher-Ee program, and showed fighting spirit with their throw triple loop. An edge call on their double Lutzes cost them some points though, so even though their program components were ranked second, Rau and Simpson were ranked fourth.

Siblings Alexandra Young and Matthew Young, the only entry at the Canadian Championships representing Newfoundland and Labrador, were fifth in the short program with a score of 34.94. The Youngs stayed on their feet, but struggled with the landings of both their throw triple loop and their double Lutzes.