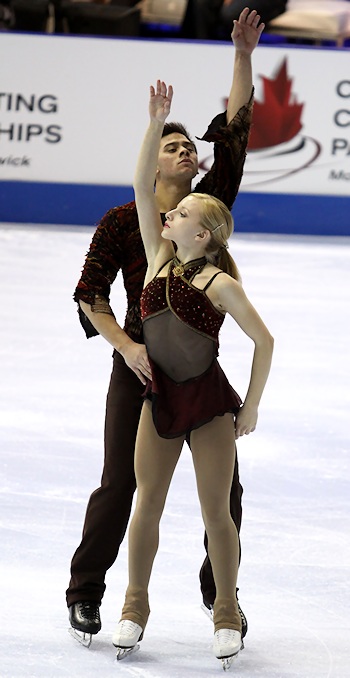 Katherine Bobak and Ian Beharry of Western Ontario won the junior pairs title with more than 27 points to spare.

The 2012 Canadian Figure Skating Championships continued with the junior pairs short program. Katherine Bobak and Ian Beharry (WO) easily took the gold, while Krystel Desjardins and Charlie Bilodeau (QC) and Mary Orr and Anthony Furiano (WO) won the silver and bronze, respectively.

The question was not whether Bobak and Ian Beharry would win—it was only a matter of how large their scoring margin would be.

The 2012 Junior Grand Prix silver medalists arrived at the Canadian Championships as the absolute favorites in the junior pairs event. While some competitors may have lost focus due in that situation, Bobak and Beharry performed beautifully.

It is all but certain that Bobak and Beharry are heading to the World Junior Championships in their debut season, and this event was a terrific tune-up prior to taking on the world. After all, a season like this is not a sprint.

“This season’s just been great, the whole way through,” Beharry said. “Every single program has been getting better.

Although both had competed internationally for Canada prior to teaming up, neither had seen this level of success until this new partnership began.

“I think our personalities go really well together,” Bobak said. “Our work styles go together and our coaches manage to keep us in the game really well.”

Bobak and Beharry were certainly in the game during their free skate, laying down a nearly clean performance of their Spartacus program. The only mistake was a little trouble with the throw triple loop, but the program was packed with plenty of clean highlights, including a throw triple Salchow, a double Axel-double Axel sequence, and lovely lifts.

They earned 98.79 points in the free skate—and would love to hit the 100-point mark on the next time out—and totaled 149.96 overall. Their score was a new Canadian junior pair record.

Desjardins and Bilodeau moved up a spot after the short program to win the silver medal. After opening with a gorgeous triple twist, the team sailed through most of their tango program until they reached their throw triple loop in the second half. Desjardins fell on the landing of that throw, but they recovered to fight through a double flip-double toe loop-double toe loop combination.

The jump elements are still a work in progress for Desjardins and Bilodeau, and they do not have the difficult jumps yet, but their pair elements are wonderful. They have such strong unison on their side-by-side spins that they chose to end their program with them, and their lifts are complicated, yet effortless. They ended the day with 122.47 points overall.

Orr and Furiano swapped places with Desjardins and Bilodeau and ended up third with a score of 119.63. Their Malaguena program opened with a ton of spark and a strong triple twist, but they did not have their jumps under them today. The team attempted the most difficult throws in the competition, triple flip and triple loop, but neither was landed cleanly. Little mistakes on several of the elements began to add up, and that meant the difference between the silver and bronze medal.

Shalena Rau and Phelan Simpson (WO), training partners to both Bobak and Beharry and Orr and Furiano, finished fourth with a reprise of last year’s Ragtime program. Their free skate score of 76.75 contributed to their total of 115.57 points. They attempted two triple throws, loop and toe loop, and along with Orr and Furiano, they should be proud of the content that they are trying while they aim for consistency.

Moving up a spot from sixth place to fifth overall, were Leah Hyslop and Bob Goodwin (WO) with a total score of 102.82. They completed a throw triple Salchow, though not perfectly, and earned almost all positive Grades of Execution (GOE) for their double twist. Unfortunately, they received credit for only single flips and really had to fight to get through their double loop-double loop combination.