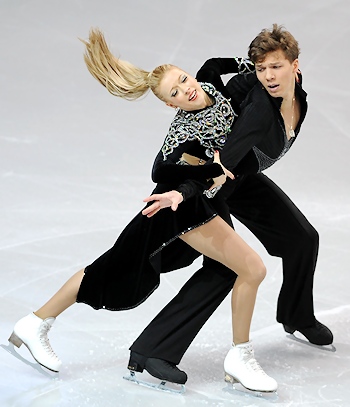 Russia’s Ekaterina Bobrova and Dmitri Soloviev grabbed a surprising lead in the short dance at the 2012 European Figure Skating Championships, edging out favorites Nathalie Pechalat and Fabian Bourzat of France by just 0.17 points.

Bobrova and Soloviev’s performance to Samba, Rhumba and Samba was solid and the twizzles and the straight line lift merited a level four, while the Rhumba sequences and the footwork were a level three. The European silver medalists scored 65.06 points.

“Being in first place is a big success for us,” Soloviev told the press. “We are very happy with the way we performed today. Tomorrow we’ll rest a little and then we’ll fight again (in the Free Dance).”

“The score is just a little lower than our season’s best,” noted Bobrova, “and it is much higher than at the Grand Prix Final and the Rostelecom Cup, so we are pleased with it.”

Pechalat and Bourzat danced a very energetic Samba and collected a level four for the lift and the twizzles, but the side by side footwork and one Rhumba sequence were just a level two.

The reigning European Champions had to settle for second place at 64.89 points. Maybe the technical panel was extra strict on them, but the judges certainly weren’t in their favor, giving unexpectedly low component scores for this characteristic performance. The crowd booed when the marks came up.

“We thought we showed a good performance,” said Bourzat. “We tried to entertain the audience and gave a lot of energy, maybe too much energy, for paying attention to all the edges.”

Pechalat isn’t giving up yet. “We don’t feel pressure. Sometimes it is better to be the challenger than the leader and maybe it is good for us to be in second place, very close to the first place. We won’t let our title go. We need to skate and fight (in the Free Dance).”

Riazanova and Tkachenko overcame problems with low levels they had earlier this season. The team picked up a level four and three for the Rhumba sequences, and a level four for the twizzles and curve lift. Their dance to Rhumba and Salsa appeared very smooth and was worth a season’s best with 61.34 points.

“[Being in third] is very surprising for us and we are very happy with this success,” Tkachenko said. “After Nationals, we worked hard on the Rhumba and the footwork. Therefore, maybe we got a level four and three now.”

“We didn’t do anything special and we didn’t make any changes,” he added. “We are excited to finally have started the competition. We arrived on the 22nd and we were already impatient to throw ourselves into the battle. We are very pleased with our skate. Now we have to stay calm and focused for the free dance.”

His partner explained that she had fully recovered from her practice accident in mid-December when she suffered a concussion and a broken nose.

The free dance should be very exciting with the teams from fourth to seventh being separated by less than one point.

Penny Coomes and Nicholas Buckland of Great Britain lead the pack with 59.78 points in fourth place just ahead of Isabella Tobias and Deividas Stagniunas of Lithuania with 59.66 points.

To the delight of the home crowd, Coomes and Buckland turned in a strong performance to Rhumba and Cha Cha. They earned a level four for both Rhumba parts, the lift, and the twizzles.

“I think that was one of the best performances we’ve done of that program,” commented Buckland. “The program’s come a long way and it’s nice to see the improvement and see the scores go up.”

“Having the crowd behind us is a real boost,” he added. “It helped to clear away some of the nerves and actually relaxed me. I thought I might be more nervous in front of a home crowd, but it lifted me up and calmed me down.”

“Absolutely. Being able to get that feedback from the audience makes you play up to it more. It’s great to get that reaction. It was a bit like at the Olympics and last year in Moscow, but this was the best.”

Tobias and Stagniunas scored highly as well with their two level four Rhumba sequences that alone were worth 14.14 points. They had chosen a fun Shakira medley that was well received by the crowd in the Motorpoint Arena in Sheffield.

“I thought we did a really great job,” Tobias shared. “I think it was definitely our best performance to date. We felt strong, we felt a connection to each other throughout, and I think we built energy. This is an amazing crowd.”

Cappellini and Lanotte were a bit disappointing. They struggled with the twizzles that were out of sync and were only a level two as was the circular non-touching footwork. The Italians were upset and stormed off, not stopping in the mixed zone for a comment.

Ilinykh and Katsalapov have tons of charisma and are one of the most eye-catching teams out there, but today they were a little sloppy and it cost them. The side by side footwork was fast and looked smooth, but it earned just a level one, and the twizzles were a little wild. At least the Rhumba was worth a level three for both sequences.

The Russians were surprised about the level one for the footwork.

“In each practice we try to make sure that we do everything right in the footwork, and nine out of ten times, it is a level four,” Katsalapov said. “For today, I don’t know why the level was low. We felt really good during our performance, [but] it was just a little hot out there.”

“It was a very good skate,” added Ilinykh, “but if there were mistakes, we will work on them to improve for next time. I am a little shocked about our score. Now we will rest a little and clear our head for the free dance.”

Pernelle Carron and Lloyd Jones improved their season’s best by about five points to finish eighth at 57.40. Nelli Zhiganshina and Alexander Gazsi of Germany in ninth place also had a new season’s best with 56.79 points, but were surprised at their level two for the second Rhumba sequence.