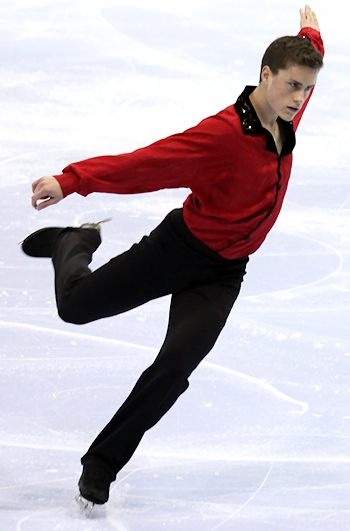 Joel Bond of Northern Ontario performs to “Mozartango” for his Short Program at the 2012 Canadian Figure Skating Championships.

Joel Bond did not arrive in Moncton, N.B., for the event with designs to lead the junior men’s pack.

“I wasn’t expecting to win the short program at all,” Bond said. “I had been skating pretty well. I just wanted to come in and skate my best.”

The 19-year-old was ninth in this event last year and seventh at Skate Canada Challenge in December, so the top of the leader board is new territory for him. His Mozartango program featured a triple toe loop-double toe loop combination and a strong triple Lutz, but it is usually his smooth skating that demands attention, while the jumps are not always consistent for him. Fortunately, the jumps were there for him today.

“I always have a bit of nerves,” he said, “but today, I felt really confident. I got into the ice and it flowed well.”

Less than a point separates Bond from his closest competitor, so he will need to recapture what he felt before the short program and duplicate it for the free skate.

“I am going to try to keep the same cool head,” Bond said. “Whatever happens, happens. I am hoping for the best.”

With almost identical program components scores, O’Brien is sitting in second place with a score of 51.69. He attempted a more difficult combination that Bond, the triple toe loop-triple toe loop, but he fell on the second jump. The rest of his Once Upon a Time in America program was solid, though, including a nice triple Lutz. O’Brien also pays close attention to his expression and choreography.

The top two skaters actually both use Jeff Buttle as a choreographer, and while their styles are different, both skaters do have qualities that are reminiscent of Buttle’s early years.

Gordon is right on their heels with 51.38 points. At just 15, last year’s novice champ is still developing his own style which was evident in his swing short program. Attempting the same jump content as O’Brien, Gordon fought for the landings on both jumps, but did stay on his feet.

After winning the silver medal in novice pairs on Tuesday, Dustin Sherriff-Clayton (CO) was back on the ice on Wednesday for the junior men’s short program. His tango and mambo program was sharp and lively, and although he only went for a double Lutz instead of the triple, the clean program strategy earned him an excellent score of 49.62. One of the highlights of Sherriff-Clayton’s program was his level three step sequence which earned positive Grades of Execution (GOE) from all of the judges.

Sherriff-Clayton’s rival in pairs, Alistair Sylvester (WO), finished close behind, in fifth place with 48.07 points. Although Sylvester fell on an attempted triple Lutz that was downgraded to a double, the majority of his Night Castle program was extremely secure. Like Sherriff-Clayton, Sylvester also had an excellent level three step sequence that earned all positive GOEs. With many of the competitors so closely matched, Thursday’s free skate will be an exciting way to close the junior level competition.