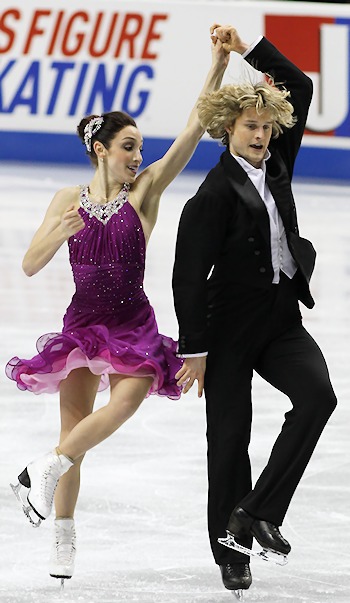 Even if the results were generally predictable, the figure skating was electrifying this afternoon at the 2012 U.S. Figure Skating Championship free dance competition.

Reigning World Champions Meryl Davis and Charlie White skated away with their fourth consecutive U.S. title, leaving the rest of the crowd in the dust with their Die Fliedermaus program.

“We felt really great about our performance today,” Davis said following the competition. “We left it all out there on the ice and pushed beyond our comfort level this week. We’re building for the rest of the season, and we’re exactly where we want to be at this point.”

Davis and White had the crowd behind them every step of the way, and the applause built as the program wore on. With the lone exception level three on their circular steps, Davis and White were nearly perfect. In fact, the duo received a perfect score of 10 for interpretation and timing.

“The audience helps to make our performance better,” White admitted. “They help us to build momentum, and I think that they appreciate that.”

The champions earned 191.54 points in the competition, more than six points higher than last season’s total.

Finishing with the silver medals for the second straight year are Maia Shibutani and Alex Shibutani, who took the audience on a trip back to the Glenn Miller era.

“This year we were really struggling to come up with an idea for a new free dance,” Alex said. “We originally brought In the Mood to the rink, and Marina (Zueva) combined it with Moonlight Serenade and The Chattanooga Choo Choo. The first part is based on Sun Valley Serenade, and we wanted to make sure that we stayed true to that in our program.”

The Worlds bronze medalists earned 178.84 points in the competition, and are surely heading to Nice, France, in March to attempt to defend their world standing.

“This was a stronger skate for us, and we’re really happy with that,” Maia said. “We’re building from competition to competition, and really enjoyed the great crowd.”

Competing in their first U.S. Championships as a team, Madison Hubbell and Zachary Donohue finished with the bronze medals. Though both skaters have competed here before, this is the highest finish for both.

“We are more than ecstatic with our performances and our results here,” Hubbell said after the competition. “We’ve had a lot of ups and downs in our short time together, and to be sitting here with the top teams is amazing. We’re looking forward to the rest of the year.”

The bronze medalists finished with 151.60 points in the competition, and are expected to be named to the World Championships team.

Finishing with the pewter medals were Lynn Kriengkrairut and Logan Guilietti-Schmitt, who just missed out on the medals stand last season and finished in fifth place.

“This what we look forward to all year long,” Guilietti-Schmitt said. “We were here last year, and unfortunately had a bit of a disappointment. This year went a lot better and we are really excited.”