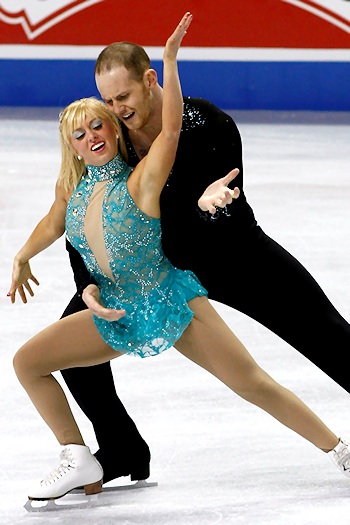 It was the third consecutive year that either Caydee Denney or John Coughlin ascended to the top step of the podium at the 2012 U.S. Figure Skating Championships in San Jose.

Denney, who won the title with former partner Jeremy Barrett in 2010, and Coughlin, who was the gold medalist last year with Caitlin Yankowskas, won the 2012 U.S. pairs title together with a flawless routine that brought the crowd to its feet.

Coughlin became the first American skater to win back-to-back titles with a different partner since Melissa Militano did it back in 1973-74.

“Has it been that long?” Coughlin said. “I didn’t know that. Cool.”

Skating to Jeff Beck’s modern version of Nessun Dorma from the Puccini opera Turandot, Denney, 18, and Coughlin, 26, were on fire. The duo nailed every element—including side-by-side triple toe loops and a throw triple loop.

A late program throw triple flip—the move that Denney fell on in the short program, sealed the victory for the newly-crowned champions.

“I really made it a goal for myself, a personal goal, to just go out there and do the best that I could no matter what happens,” Denney said after the program. “I’m glad I achieved that goal.”

Denney and Coughlin scored 189.70 points in the competition.

Slipping from the top spot to finish with the silver medals were Mary Beth Marley and Rockne Brubaker who nearly pulled off the win.

“All things considered, skating last with everything on the line, for us to come through and show up and pull out a silver medal was great,” Brubaker said. “Our goal was to make the World team this year and we achieved our goal. It was a good fight—a few little bobbles here and there, but it was good.”

Brubaker opened the program—set to Rachmaninov’s Piano Concerto No. 2 in C Minor, with a fall on a triple toe attempt, and then later botched the landing on the side-by-side double Axels. Their lead from the short program kept them in the hunt for the national title, but he and Marley fell just short with 186.07 points.

“Mary Beth was great today,” Brubaker, 25, said of his 16 year-old partner. “I made two mistakes today that I normally don’t make. For her to stay focused really saved us some points.”

Marley added, “I was really confused because he normally doesn’t make mistakes. I knew that we couldn’t have anymore falls, so I tried to stay focused on completing everything.”

Finishing in third place were two-time silver medalists and Olympians Amanda Evora, 27, and Mark Ladwig, 31. It wasn’t in the cards for the Florida trained team with mistakes on three big elements, including a fall on the double Axel by Evora.

“The second half of the program was definitely better than the first,” Ladwig admitted. “We had some bobbles, but fortunately we were able to finish up strong.”

Evora agreed with her partner’s assessment.

“The rhythm got better as the program went on,” she said. “It definitely was a fight out there.”

Evora and Ladwig finished with 178.98 points in the competition.

Relative newcomers Gretchen Donlan, 18, and Andrew Speroff, 23, finished in fourth place, in just their third season together. Trained in Boston with Bobby Martin and Carrie Wall, the duo finished with 171.61 points in the competition.