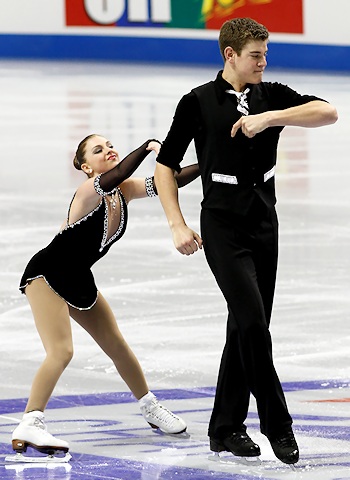 The junior pairs competition at the U.S. Figure Skating Championships in San Jose, Calif., was chock full of promising skating, and when the final standings were posted, any of the top five teams could come away with the title.

Leading the way are Haven Denney, 16, and Brandon Frazier, 19, a product of the Dalilah Sappenfield/Larry Ibarra machine out of Colorado Springs, Colo. The mother and son coaching team boast four of the top five teams in the competition. Denney and Frazier take a two-point lead into the free skate.

“We are excited to do our personal best here,” Frazier said. “It didn’t feel like we were skating at nationals, but instead it felt more like a day at the office. We were very relaxed and comfortable.”

Their Chicago-themed program featured a strong throw triple loop and a hold-your-breath lift in which Denney’s back was parallel to the ice. The team, who skated together on the juvenile and intermediate level before splitting up a couple of seasons back, renewed their partnership when Denney returned to Colorado Springs with her older sister, Caydee, early last year.

“I knew that one day we would skate together again,” Frazier said. “It was something that I kind of knew would always happen.”

Denney agreed. “Brandon is like my brother. We have a great relationship, and it makes it so easy to skate together.”

After a scoring error was corrected, Denney and Frazier moved into first place with 52.83 points.

Finishing in second are Junior Grand Prix Final qualifiers Jessica Noelle Calalang, 16, and Zack Sidhu, 19, with 50.84 points. A sprained right ankle to Sidhu kept them from competing until this week.

“It’s a lot better now,” he explained. “We’re really happy with how we skated, and it was a good performance.”

Skating to a Ragtime-themed program, Calalang had to be convinced to give the program a try.

“At first I didn’t really like the music,” she admitted, “but then it grew on me.”

Coach Todd Sand said that music choice is something that is quite challenging for the two.

“This was something that they both could agree upon,” said the former U.S. Champion. “Jessica is very much about skating to classical music, while Zack likes more character-driven pieces. This was in the middle for them, and I think that it is a nice fit. It’s like a show program in some ways.”

“It was nice to come out and do what we do at home,” Simpson said. “(The Junior Grand Prix) has taught us how to compete well and what we need to bring to the table.”

“This was good experience,” Blackmer said. “Every program is another step in our development as a team, and I’m happy with how we skated today.”

In fourth place was another team from Colorado Springs, Kylie Duarte, 18, and Colin Grafton, 20, who scored 48.83 points. Like the skaters ahead of them, Duarte and Grafton also skated without error, and have a great shot at a podium finish.