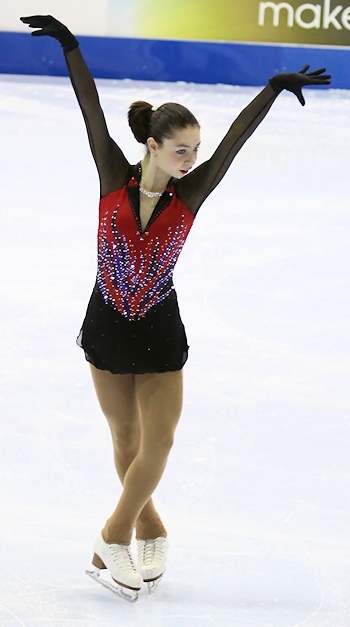 This season’s point incentives have pushed many of the novice ladies to attempt more difficult jump content than in the past. Of the 18 ladies in the competition, nine received bonus points. Only Dunley and the 17th-place finisher, Valérie Lavergne, received three bonus points.

Moving up a spot after the short program, Austman skated one of the cleanest programs in the final flight en route to a second-place finish. The 13-year-old had a mistake on the landing of her triple Salchow-double toe loop combination and a single loop later in the program, but two clean double Axels and a confident triple Salchow helped her stay high in the standings. Austman’s Tango de Amor program was presented with great maturity, especially for her age.

“I felt super nervous,” Austman said about her mindset before the free, “because at Challenge, I hadn’t skated so hot, so I just wanted to do a lot better here and see where I could end up.”

With a score of 68.99 in the free skate, Austman earned 105.01 overall. The silver medal is certainly an improvement over her 10th-place showing at Skate Canada Challenge in December.

Although her free skate was ranked fourth, Sales did enough in her sassy Victor/Victoria program to hang on to the bronze medal. Sales, who attempted a triple Lutz in the short program, went for the big jump again here, but stumbled out of it. Most of the landings on her jumps were messy, and the small mistakes began to add up.

Despite the jump problems, Sales never gave up on the performance and fought for all the points that she could gather to stay on the podium, edging out her closest competitor by under a point. Like Austman, Sales also moved up quite a bit from her Challenge placement, from eighth to third.

Marianne Rioux Ouellet (QC) was the athlete who finished fourth, just a few tenths from the podium, with a score of 98.56. Rioux Ouellet’s free skate featured two triples, an opening triple Salchow in combination with a double toe loop and a lovely triple loop midway through the program. Rioux Ouellet defeated Sales on the Technical Elements Score (TES), but her program components were not as highly marked.

Also from Québec, Sandrine Martin placed fifth after a fifth-place free skating, scoring 92.66 overall. Martin intended to do two triple Salchows, but only completed the first one (in combination with a double toe loop), an element that was fairly well done. Her second Salchow was popped to a double. Aside from a couple of minor errors at the top of the program, Martin skated very well, earning positive Grades of Execution (GOE) on most of her elements. Her dramatic program was set to Caprice Fantastique and Orphée aux Enfers.