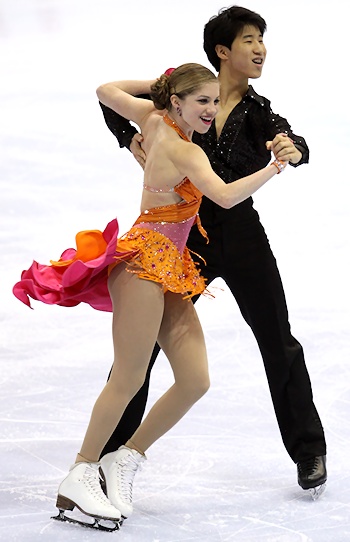 The depth in Canadian junior dance is astounding, a fact that was obvious in the short dance at this event. Even in front of a sparse crowd, the juniors brought tons of spicy Latin energy to their programs.

With seven teams scoring over 50 points, generally regarded as a benchmark of excellent in the junior short dance, the competition is tight heading into Thursday’s free dance.

Last year’s novice champions, Edwards and Pang, brought the house down with their best short dance of the season. The youngsters may not have had the maturity of some of their older competitors, but their fresh skating had plenty of spark and their elements were spot on, leading to a season’s best score of 56.81.

“We were really happy with our skate,” Edwards said. “We felt confident, and we just wanted to go out and do best and the scores would fall where they would.”

With all level four on the Cha Cha Congelado patterns, the twizzles, and the lift, and a level three on the midline sequence, the scores had nowhere to fall but over the 50-point mark.

“We wanted to really perform to the whole audience, not just the judges,” Pang said about the short dance. “And to put it all out there.”

Edwards and Pang certainly did not leave anything on the table, earning the highest mark in the program components scores.

“The free dance was our stronger point in all of our past competitions,” Edwards admitted, “so I think we just wanted to have a solid short dance.”

Looking ahead to competing their free dance, the duo hopes to stay confident and calm, approaching the competition the same way that they did in their winning short dance.

With 55.14 points in their short dance, Poulin and Servant are close behind and still definite contenders for the national title. The team earned the same levels as Edwards and Pang and beat them on the technical mark by .01, but were 1.68 points behind the leaders in program components. They actually credit their success in this to program to focusing on performing, instead of worrying about completing their elements well.

“We changed our approach,” Poulin explained. “Instead of performing, we focused more on skating clean. A judge came to see us and said, ‘I’ve lost you guys, you are not the same.'”

Consistency issues have plagued Poulin and Servant in the past, and particulary so this season. This short dance was only the second clean skate in competition for them, but things are looking up.

“We’re kind of on a roll now with finishing the free dance how we did in Regina [at Skate Canada Challenge] with that clean skate,” Servant said. “Everything’s rolling, so it’s comforting.”

Their new mindset was evident in their smiles as they took the ice on Wednesday night. Their playful short dance used Sittin’ on the Dock of the Bay for the cha cha portion, and the program felt like a day at the beach. Poulin and Servant are hoping to remain calm and turn in a great performance to finish the competition.

Dalmer and Firus, training mates of Edwards and Pang, also delivered their best short dance of the season to score 54.51 points for a third-place ranking. Their sassy Latin number was well-received by both the judges and the audience and featured three level four and two level three elements.

“It was our new personal best in the short dance,” Dalmer said, “and because it was at Nationals, it was that much better.”

“It was really solid,” Firus added. “It felt great.”

The duo hopes to break the 70-point mark in the free dance since they have approached that this season, but they do not want to focus too much on scores, instead trusting their training to have a great skate.

A pair of training partners from the Québec section are knocking at the top three spots.

Victoria Hasegawa and Connor Hasegawa finished fourth with 54.33 points after a humorous take on the Latin rhythm. They hit all of their levels in their program—fours on everything except for a three on footwork—but had a few balance checks that prevented this dance from being their best performance.

Élisabeth Paradis and François-Xavier Ouellette had a solid performance, but only earned a level two on their footwork and had a level three on one of their Cha Cha Congelado patterns. Their score of 52.72 was not quite what they scored at Challenge when they won the short and shot way out in front of the field, but they are still in the medal hunt.