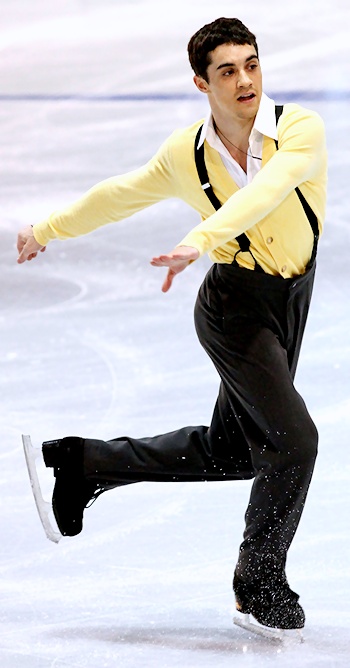 Javier Fernández of Spain performs to "I Love Paris" and "Petit Fleur" at the 2011-12 ISU Grand Prix Final of Figure Skating.

Javier Fernández made figure skating history this season when he became the first Spanish skater not only to medal at the ISU Grand Prix (GP) of Figure Skating, but to qualify for the GP Final. There, he reached the podium again and took the bronze.

“I am just so happy,” the 20-year-old repeated in each press conference at the Final, looking stunned that he sat next to stars such as Canada’s Patrick Chan and Japan’s Daisuke Takahashi.

“I didn’t even expect that when I started the season,” said Fernández, surprised by his success this fall. “I’m so happy that I can compete with the top skaters. I didn’t expect to go to the Final. Last year I wasn’t even close to the podium (in the Grand Prix). It was a big surprise this year.”

“Everything is working well for me,” said Fernández of the competitions and practices.

It wasn’t the first time the charismatic Spaniard made figure skating history. When Fernández placed 19th at the 2009 World Figure Skating Championships, he became the first male skater since 1956 from that country to qualify for the Winter Olympic Games.

It appears he will have to get used to being one of the elite skaters that are fighting for the podium positions in each event.

Figure skating fans were already paying attention to Fernández a few years back when he showed up on the scene with a big triple Axel. Since then, he has added the quad Salchow and toe to his repertoire. He also finished 10th at Worlds 2011 in Moscow, another first for Spain. At this point, the judges were taking note as well.

“The components are going up,” observed Fernández. “I used to be a skater that got more points in the technical than in the components. Now it is almost the same.”

“I was a new skater and it is a new country,” Fernández explained, referring to Spain as a new figure skating country. “It was really difficult. The judges don’t look at me with the same eyes because I was nobody from nowhere. So year by year it improved. Now everybody kind of knows me and it’s much easier to compete.”

Fernández switched coaches at the end of last season, moving from Nikolai Morozov to Brian Orser. He is now training full-time in Toronto. However, he doesn’t feel that this change alone is the reason for his rise in the rankings.

“I was improving before, too,” he acknowledged.

The skater from Madrid decided to change coaches at the end of last season as he felt he wasn’t getting enough attention from coach Nikolai Morozov. When looking for a new coach, he and his federation quickly decided to ask Orser. The Canadian agreed, and Fernández says that he feels very happy working with him and others in his new club in Toronto.

“I feel it’s extremely important that a skater at this level gets full attention,” said Orser. “I learned this from the past when working with Yuna Kim. We try to create an environment that is productive and happy. From the very beginning, communication is important. We discuss with skaters what their goals are and what they expect from us. It’s imperative that this foundation is established in order to move forward with any skater or team.

“I feel that what we do that is special here (Toronto Cricket, Skating and Curling Club) is that it’s a full service,” Orser added. “We don’t just give a 30 minute lesson. We pay attention to what the skater has to work on in all aspects.”

“I think I got better in the components in the skating,” Fernández said. “I have been working on the components a lot. I mean, a lot! And on skating, skating, skating, and how to save energy when I’m skating. We are trying to work on if I’m tired, that I don’t have to look tired in the program. We are working on things that I didn’t use to work on. I’m really happy how we work together.”

“I noticed his talents from years past,” said Orser. “When I agreed to work with Javier, I quickly did my research and I looked to see where he needed to improve. The jumps were there, however, his spins, transitions, skating skills, and other components needed to be addressed. It’s easy to get hung up on quads, but in order to compete at the top level, you need to have the full package.”

The Spanish Champion has been consistently landing the quad toe and Salchow in competition this season, which obviously helped his score. He earned surprised looks from his competitors when he claimed that the quads were easy.

“Yes, it was really easy, actually,” Fernández confirmed during the interview. “When I do my quads, it is almost the same for me to do a quad or a triple. At the end I get more tired because of the quads, but they are easy to do. I am pretty confident, even in practices. Before I wasn’t doing many quads in practice, but now I do a lot of them, like every day.”

Currently, he doesn’t include two quads into his short program but doesn’t rule out this option for the future.

“I feel if I put two quads into the short program, it is too much pressure,” Fernández explained. “For now I think it is still too much. They are jumps that I can do easy, but in my mind they are still not perfect. If I’m doing a triple loop, it is so easy in my mind that I know that I’m going to do it. Maybe afterwards I don’t do it or I fall, but in my mind I am sure I can do it, and this is not yet the case for the quads.”

Fernández’s success also drew attention in Spain, a country where so far soccer is unrivaled as the number one sport.

“Actually the media in Spain is really excited,” he acknowledged. “They are calling me and I’m in the newspaper and make the news which is not normal in Spain. They open the sports news with me. This is really interesting and I am so impressed. I don’t know how to make it work that ice skating can become a normal sport in Spain like it is in Russia or in Japan, where it is one of the top sports. For now, everybody is crazy about football. It’s going to be difficult to fight with football.”

For sure, Fernández has already contributed a great deal in the sport of figure skating in Spain, and more is certain to come. He plans on competing at least until the Olympic Games in Sochi and perhaps even beyond.

Since moving to Toronto last summer, Fernández has adapted very well to his new living and training environment. He describes his off-ice life as fairly normal.

“I live in my apartment, I really like the ice rink, I’m happy there, and I’m relaxed,” he divulged. “I live alone, do my own cooking, and clean my own house. I do everything myself.”

His mother taught him how to cook.

“When I was young, I loved to be with my mom when she was cooking, so I learned. I cook Spanish food, normal food,” Fernández noted, but admitted that paella, a traditional Spanish dish, is still too difficult for him to do.

Fernández also likes to hang out with his new friends in Toronto and loves his play station.

“I don’t do anything else much interesting. I don’t do other sports,” he said with a laugh. “Maybe one day I will decide to do something else, because in my ice rink there is curling, a swimming pool, and squash. Maybe one day if I get bored I will just join one of these sports. For now I’m not bored. I like what I’m doing.”

He likes Toronto and it reminds him of New York. New York is special for him as his girlfriend, an ice dancer Cortney Mansour from Canada who competes with Daryn Zhunussov, is training there.

“She did two Junior Grand Prix events and maybe they will go to Worlds as they are skating for Kazakhstan,” Fernández explained of Cortney, whom met while training in Hackensack.

Competing in the Grand Prix Final was a big motivation for the Spaniard.

“It is motivating for me to feel that right now I’m one of the top skaters in the world,” Fernández explained. “It makes me think that I have to keep working and that I have to work hard to be in the same spot next year. I’m going to work the best I can to be in the best position to stay on the podium.”

His strong results in the Grand Prix has set Fernández up as a medal contender for the European Championships.

“If everything goes well, I think I can be on the podium,” he acknowledged, “but I still have to keep working, because there are good skaters at the Europeans. I cannot relax. It won’t be easy.”

“I think the biggest difference this year is that he believes in himself, ” said Orser. “When you believe in yourself, train with confidence, and have a supportive team behind you, anything is possible.”