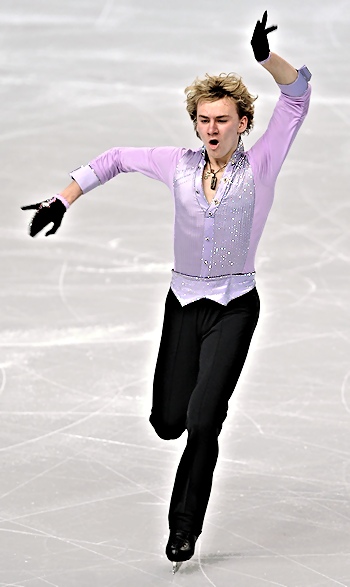 Artur Gachinski and Evgeni Plushenko of Russia finished head to head in the Men’s short program while other contenders stumbled and tumbled at the 2012 European Figure Skating Championships in Sheffield, Great Britain, on Thursday. Tomas Verner of the Czech Republic is currently ranked third.

Gachinski turned in a strong performance to St. Louis Blues, reeling off the only quad-triple toe combination of the day, a somewhat scratchy triple Axel, and a strong triple loop. The World bronze medalist also scored well with the non-jump elements, receiving a level four for two spins and the circular footwork. This meant a new season’s and personal best score with 84.80 points for the 18-year-old from St. Petersburg.

“I think this was my best ever skate so far,” said Gachinski. “I did all the jumps, the spins, and the footwork as I had planned. I basically expected such a performance as I was ready for the short program.”

“Right now I feel only that I am the leader in the short program,” he added. “The free skating is still to come and everything can change.”

As always, he was asked how it is to compete against Plushenko.

“This is a great honor for me, because I always was looking up to him and I still do,” said Gachinski. “It was very nice to compete in this event with him and to fight for the medals,” Gachinski answered.

It was also the first time for him to beat his idol Plushenko in at least a segment of a competition. As his world ranking is low after not competing for almost two years, Plushenko skated in the earlier half and drew starting number four. He had a seven am practice.

After aggravating his knee injury in practice on Wednesday, the 29-year-old veteran had to do without his sharpest weapon, the quad toe. He went for a triple Lutz-triple toe combination, a big triple Axel, and a triple loop in his routine to Storm by Yanni. Overall, Plushenko was a bit slow but his jumps were of excellent quality and his spins and footwork merited a level three.

“These Europeans are very tough for me as I have two injuries,” Plushenko explained. “Yesterday I aggravated my knee injury, and when I do the quad toe, I need three or four minutes to recover from the pain. Therefore, we decided not to do the quad today. It was either doing a program without the quad or not competing, and I want to finish this competition.”

Withdrawing from the competition is not an option for Plushenko.

“No, once you’ve entered the fight you cannot back out. I’ll withdraw only if I can’t get out of bed,” he announced.

Verner risked the quad toe, but badly two-footed it. He came back to land a triple Axel and a triple Lutz-triple toe and posted a season’s best of 81.14 for his Carmina Burana program.

“It was a disappointing opening to the program,” the 2008 European Champion noted. “I knew when I missed the quad. I’ve been struggling with the triple Axel in practice, so I felt I didn’t have anything to look forward to, but then it was better.”

Verner achieved his first goal to make it into the last warm up group. He has had a tough start to the season.

“In the summer I slipped a disc in my lower spine and had two months off at the beginning of the season – two months of a lot of pain,” the 25-year-old explained. “It was desperate. Then at New Year I pulled the bands in my left knee, so it has not been the best start to the season. I think I am now at 80 percent fitness, but you will rarely find an athlete at full fitness.”

Grand Prix Final bronze medalist Javier Fernandez of Spain was considered one of the top contenders for the gold, but had to settle for fourth place in the short just behind Verner with 80.11 points. His quad toe was strong, but the triple Lutz-triple toe combo was shaky and he stepped out of the triple Axel.

“My performance was ok,” Fernandez commented. “I missed a few jumps and my upright spin, but I’m happy. I felt a lit bit pressure, but I tried to push myself. I’m still learning how to deal with it.”

“I practiced a lot for this event,” the 20-year-old offered. “I had a few problems. My hip and neck started to hurt, so I had to stop for four days. Still, I believe I’m prepared and ready for the long program. I just came here to do my best.”

Reigning European Champion Florent Amodio of France two-footed his quad Salchow, but included a triple Lutz-double toe and a good triple Axel into his routine. He finished fifth at 78.48 points.

“I am still dealing with my back injury since French Nationals, but I get a massage every day, I am feeling good, and I have no concerns for competing,” the 21-year-old revealed.

He had changed his short program following the Grand Prix and presented the new program to Tears of the Sun for the first time in international competition.

“The old program was good, but I didn’t get the feeling I wanted. I wanted to prepare the best way for Worlds, therefore we changed the program. I need to be ready for Worlds, which is the most important competition for me,” Amodio offered.

Michal Brezina of the Czech Republic fell on an underrotated quad Salchow to come in sixth with 76.13 points.

“I fell on the quad, which was obviously a mistake,” said the 2011 Skate America gold medalist. “I did a little three turn at the end of the combination, but I felt really good about the rest. I don’t have any expectations for the free program. I just want to do what I know and just do my job.”

Kevin van der Perren, the other 29-year-old veteran in the event, missed his triple Lutz and finished seventh (71.05 points). He was very disappointed.

“I thought I wasn’t going to compete here today,” explained van der Perren. “It started about three weeks ago that my back started to hurt. Both practices here went really bad because of the pain in my back. I didn’t sleep the whole night. I tried to catch some sleep after practice, but it didn’t work.”

“I was already so tired after the triple-triple combination, then I focused so much on the Axel,” he continued. “Then I came too close the barrier when going into the Lutz. I lost focus. As this is definitely my last European Championships, I wanted to skate here. All my family and friends are here in the audience.”

However, the seven-time Belgian champion doesn’t know yet if he’ll be fit for the free skating on Saturday.

“I’m going to wait for the practice before I decide if I compete in the free skating.”

Three-time European Champion Brian Joubert fared even worse. The Frenchman crashed on an underrotated quad toe, stepped out of his triple Axel, and the triple Lutz was shaky. He finished a distant 10th at 67.92 points.

“I was a little bit nervous but no more than usual,” offered the 27-year-old, “but this morning when I came on this ice for the first time, I didn’t feel anything. I had no sensations. The warm-up was the same.”

“Preparing for this event, I did a very good job,” Joubert continued. “I worked a lot, but I made some mistakes because I was not ready for this competition. I still have to be focused, and I think I have to change some things.”

Joubert doesn’t really expect to rebound in the free skating and was pretty sarcastic about his outlook.

“I think the same thing might happen again. Today I messed up three jumps. In the free program I have eight that I can mess up.”