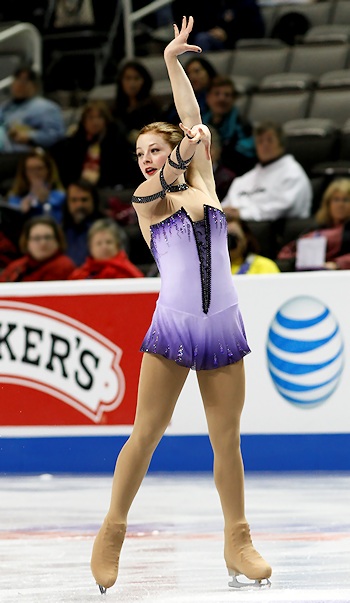 It was time for Gracie Gold to put up or shut up. The confident 16-year-old has been the talk of the American skating world since she started winning everything in sight this past summer.

Gold, who took a commanding lead after the short program last night at the 2012 U.S. Figure Skating Championships in San Jose, Calif., makes no apologies for taking control of her own destiny.

“I think I deserve this,” Gold said of her first place standing. “I have worked really hard for this, and I’ve done everything that that needs to be done to get here.”

Boy did she ever. The Springfield, Ill., native opened with an easy triple flip-triple toe loop combination reminiscent of 2010 Olympic Champion Yuna Kim’s trademark jumping pass. Gold earned for each of her jumps—including a triple Lutz and double Axel, positive Grades of Execution (GOE), propelling her to a whopping 60.21 points.

“A lot of people have been talking the talk about me, and it was my turn to walk the walk,” Gold said. “It was great, and I had so much fun. I was a little nervous, but I had plenty of time to calm down and get my head around competing.”

Performing to a modern version of Tchaikovsky’s Dance of the Sugar Plum Fairy, the leader seemed completely focused on the job at hand.

“I have been preparing for this for months,” she said. “I used to have problems focusing, but I have been seeing a sports psychologist since last March. I’ve learned how important it is to pay attention to what I am doing, and to stop watching what everyone else is doing.”

Last year’s novice champion, 15-. year-old Hannah Miller, is in second place, some five points behind the leader. Though she could not compete with Gold’s triple-triple combination, she did out-spin her. Gold received level three for each of her spins, while Miller earned level four on each of hers.

“It was a great program for me,” said Miller, who hails from Williamstown, Mich., said. “We made the decision to focus on a clean program, and that was what I set out to do.”

“I am working on a triple-triple,” she admitted, “but I am focusing on clean programs. I probably won’t put one in the free skate.”

Finishing in third place was Ashley Cain, a statuesque 16-year-old from Dallas, Texas, who is also entered in the senior pairs competition.

“Because my schedule is so busy this week, we sat down and came up with a plan,” offered Cain. “It’s all about building throughout the week, and it’s going very well for now.”

Cain used her playful presentation style throughout her Montserrat short program, drawing the audience into her world, but backed it up with solid triple jumps as well.

“I worked with (choreographer) Scott Brown a lot on this program,” Cain said. “It took me a little bit out of my box, but in a good way.”

Finishing in fourth place is local girl Polina Edmonds, 13, who landed the first triple-triple of the night—a triple flip-triple toe loop. The San Jose native won over the crowd with her youthful exuberance and flirtatious eyes throughout her American folk music short program. She scored 51.02 points.

A pair of 15-year-olds—Barbie Long and Mariah Bell, last year’s novice silver and bronze medalists, are in fifth and sixth place respectively.

The junior ladies medalists will be determined on Wednesday evening at the HP Pavilion.