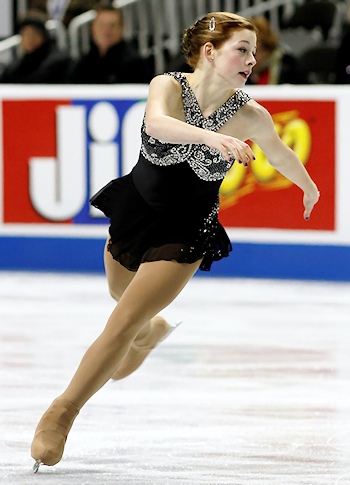 Gracie Gold earned the highest score for a junior lady since the new judging system was put into place in 2006 at the 2012 U.S. Figure Skating Championships.

Gracie Gold, the highly touted 16-year-old from Springfield, Ill., decimated the competition at the 2012 U.S. Figure Skating Championships, and takes home the junior ladies title. Her score of 178.92 points is the highest total earned by a junior lady since the new judging system was put into place in 2006.

“I have some improvements to make to this program, but overall I think it went really well,” Gold said. “I’m really happy.”

Gold was on fire from the moment she took the ice for her The Mission/The Untouchables program, completely focused on the task at hand. She opened with a triple Lutz-triple toe loop combination that would make some of the men’s competitors have cause for concern. The champion landed seven triple jumps in the program, and made only one mistake—a fall on a giant double Axel.

“I kept the same long program from last season, with some changes, but I think subliminally I was hoping to use this piece as a vehicle to take me somewhere,” the champion said. “And it took me to the podium.”

Finishing in the runner up position was another 16-year-old—Ashley Cain from Coppell, Texas, who skated a sophisticated and mature program to an instrumental version of Queen’s Who Wants to Live Forever.

“I really felt the energy from the crowd, and I also drew from some of the momentum that Gracie created,” Cain said. “It was so much fun out there tonight.”

Cain managed six triple jumps, and ironically made the same mistake as Gold—falling on the double Axel within inches of where the champion fell.

“It’s kind of funny that that happened,” Cain said laughing. “We have the same choreographer—Scott Brown, and we are both blaming him. There wasn’t anything wrong with the ice—it was just an odd coincidence.”

The silver medalist finished with 155.48 points, giving Gold the largest margin of victory for a junior lady at the U.S. Championships.

“Gracie really deserves everything that she is getting this year,” Cain asserted. “I hope that she gets named to the Junior Worlds team, and goes there and takes the Russians down.”

Finishing in third place after a second place finish in the short program was 15-year-old Hannah Miller, a resident of Williamstown, Mich.

The 2011 U.S. novice champion struggled with the landings on several of her jumps, and fell on a triple flip attempt. The bronze medalist did land four clean triples in her Masquerade Waltz program, propelling her to the podium despite her fourth place finish in the free skate. Miller earned 149.68 points in the competition.

“My training for this event went great, but I think I just pulled in on my jumps a little too tight,” Miller explained. “I have a lot of work to do, but I think that I’m pretty happy with how things turned out.”

Finishing with the pewter medal was Barbie Long, 15, from St. Louis, Mo. Long moved up from fifth in short program by placing third with her 42nd Street free skate. She landed five clean triples, and finished the competition with 144.57 points.

Mariah Bell moved up from sixth place to finish in fifth overall, while local girl Polina Edmonds had a rough outing and plummeted to sixth place with a disappointing performance.