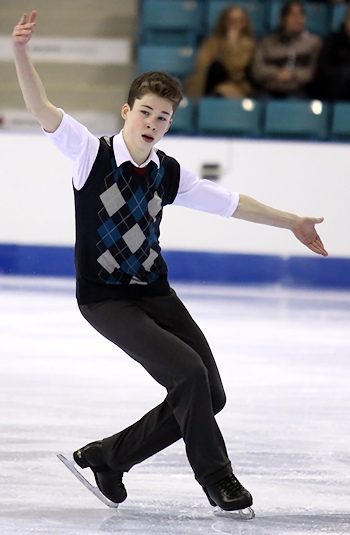 The men were given the honor of closing out the junior competition at the 2012 Canadian Figure Skating Championships, and the top five all demonstrated good performance abilities in their programs.

Mitchell Gordon (BC/YT) took the gold, while Peter O’Brien (EO) and Joel Bond (NO) won the silver and bronze, respectively.

With a terrific come-from-behind performance, Gordon leapt from third place to win the gold medal by less than a point. The 15-year-old had a similar performance to the fabulous free skate that won him the gold medal at the novice medal last year. Only a little trouble with his triple loop combination marred an otherwise squeaky clean performance.

With two successful triple Lutzes, Gordon is clearly developing the technical content that he needs to succeed on the senior level next year. His performance to music from Dead Poets Society was technically proficient, although he will need to focus on developing his expression in the future. His score of 161.04 was an excellent one, and he and his especially animated coach, Keegan Murphy, were thrilled with his effort.

O’Brien, has the opposite set of strengths as compared to Gordon. His Dracula free skate was passionate and dramatic, and he engaged the audience and received a loud ovation from the crowd, despite popping a Lutz in the second half of his program.

Aside from the Lutz, though, O’Brien was strong and confident throughout his 108.57-point effort in the free skate. With a total score of 160.26, he was just .78 away from the national title, and one step higher on the podium than he finished last year.

Bond was thrilled to be leading after the short program, but unfortunately he began to unravel in his free skate. Nevertheless, he held on to a medal with a score of 146.56. After opening with three triple jumps, he doubled the rest of the content in his program, but his attention to detail in a lovely program to music from Legend of 1900 helped him fight for a spot on the podium.

Bond worked with choreographer Jeff Buttle, and many similarities are evident in his skating style. Moving up quite a bit from a ninth-place finish at this event last year, he reached his goal for the season of medaling at the Canadian Championships.

With a fourth-place free skate that scored 94.02, Iassen Petkov (CO) finished fourth overall with a total score of 141.58. Though he fell on a triple loop near the top of his program, he did complete two triple Lutzes and another triple loop later in the program.

With mostly level twos on his non-jump elements, Petkov has an opportunity to focus on those for next season. His program to Dvorak’s 9th Symphony had plenty of drama that bodes well for his continued development.

Finishing fifth with a score of 136.29 was Alistair Sylvester (WO). His free skate was only ranked sixth and was a struggle for him overall. He fell three times in the performance and was hit with underrotation calls for two of his triple jumps. However, he fought through the program and stayed committed to his performance.