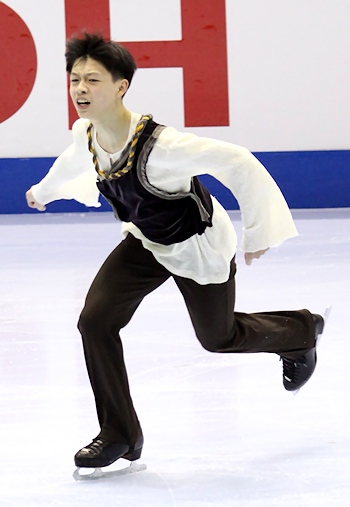 The 2012 Canadian Figure Skating Championships continued with the novice men’s long program. After three gold medals on Tuesday, all Central Ontario needed was a solid skate from one of its top two men to complete the sweep of the 2012 Canadian novice titles.

Anthony Kan (CO), the leader after the short program, delivered just that for his section in a second-place free skate. Roman Sadovsky (CO) and Nicolas Nadeau (QC) took the silver and bronze, respectively.

Racking up six bonus points, Kan’s program included four different triple jumps—Lutz, flip, Salchow, and toe loop (in combination). He landed two triple Lutzes, one in combination with a double toe loop, and although he struggled with several of the other triples, he rotated all of them completely.

Kan’s program was a unique one, especially for the novice level. With music from Jesus Christ, Superstar, he portrayed Christ in an intense choreographic effort that contrasted with his competitors’ programs. Along with having mature programs, Kan is also developing the technical skills that will help him on the junior level next year. His score of 81.71 in the free skate gave him a total of 123.41 points.

“I feel like my training has finally paid off,” Kan said after his gold-medal effort. He had missed out on the podium at Skate Canada Challenge prior to this competition, finishing fourth.

Although his free skate was only ranked fourth, Sadovsky had enough of a cushion after the short program. He attempted six triples, but two, the loop and the flip, were downgraded to doubles. He opened his Man in the Iron Mask program with a bang, starting with two solid combinations, triple Salchow-double toe loop and triple toe loop-double toe loop.

Although Sadovsky may have struggled with the jumps in some places, the tiny skater engaged the audience with his dramatic side. He earned 73.52 points in the free program and 115.11 points overall.

Québec’s Nadeau was in 12th after the short program, having made two big mistakes on jump elements. However, his first-place free skate (83.37) was enough to vault him onto the podium for a bronze medal with a total score of 113.77.

Nadeau’s free skate included five clean triple jumps, and a sixth, his triple Lutz, was underrotated. With five bonus points to help him along, Nadeau’s climb to the podium was exciting to watch as the free skate competition unfolded. His Sorcerer’s Apprentice program made a wonderful impact and left an impression on the audience that continued through the last flight.

Just a heartbreaking .55 points from the podium was Bennet Toman, also representing Québec. Toman was fourth in the short program and fought hard to break into the top three, but his 76.22-point free skate was just shy of what he needed. He completed four clean triples and squeezed out a fifth, the triple loop, although he received negative Grade of Execution (GOE) for it.

Toman’s well-choreographed program to Spanish music featured two level four spins and a level three step sequence. Last year’s pre-novice Canadian champion has certainly progressed well and although it is always tough to finish just off the podium, he has set himself up well for next season.

Third after the short program, Daniel-Olivier Boulanger-Trottier (QC) struggled in his free skate and slipped to fifth place with an overall score of 103.40. He landed a triple toe loop-double toe loop combination near the beginning of his skate, but struggled with many of his difficult jump elements throughout the program.