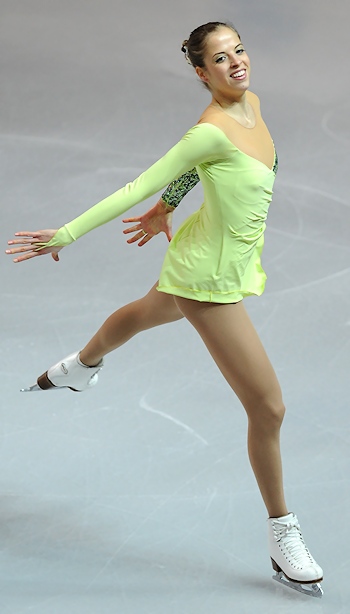 Carolina Kostner of Italy performs to "Allegretto from Trio No. 2" at the 2012 European Figure Skating Championships.

Top favorite, Carolina Kostner of Italy, took the lead in the Ladies short program at the 2012 European Figure Skating Championships in Sheffield, Great Britain, on Friday. She is followed by Finland’s Kiira Korpi and Russia’s Ksenia Makarova.

While Kostner lived up to the expectations, she didn’t skate as confidently in the short as she did in the Grand Prix Final last month.

The three-time European Champion completed a triple toe-triple toe combination, a triple loop, and double Axel, but wobbled on the final combination spin in her innovative program to an Allegretto by Dmitri Shostakovich. The Italian scored 63.22 points.

“I was a little nervous when I approached the ice rink and saw the people,” Kostner, 24, confessed, “but then I thought, ‘this is the 10th time I’m doing this, just enjoy it because you don’t know if next year you’ll still be here’. It helped me a lot to calm down, to just do what I do in practice, so I’m very pleased about how I did.”

“After winning the GP Final, we decided to have a break,” explained the three-time World medalist. “Four competitions within eight weeks were too much. I wasn’t able to focus anymore in practice. I spent ten days with family and friends and recharged my batteries. I felt a bit unwell just before flying to Sheffield, but I told my self to stay calm, you’ve done good practices, you know how to do everything, and so far everything went well.”

After a tough start to the season, Korpi finally put out a good short program to Somewhere Over the Rainbow that included a triple toe-triple toe combination, a double Axel, and two level-four spins, but she underrotated the triple loop.

The Finnish champ stayed close to Kostner with a season score of 61.80 points.

“I feel good,” said the 23-year-old. “it was absolutely the best for me this season. I’m so happy that I did it today, although I felt quite nervous.”

“I have had a rough season,” Korpi offered. “I had some injuries in the beginning of the season and the preparation for this competition wasn’t ideal. I wanted to come here and not think about any placements, but just to do my best performance and try to enjoy the competition.”

Like the top two, Makarova went for a triple toe-triple toe combination, but two-footed it. She went on to complete a triple loop and double Axel to pick up 57.55 points for her lyrical routine to Maria and the Violin’s String.

“I’m content with my program,” said the 19-year-old. “I came out to skate a clean and very confident program, which I did. It’s hard to explain how I felt, but I knew when I was coming out, I had to do what I do every single day in practice.”

“I’m happy I made it to the Europeans,” the former Russian champ said. “I worked all year to be here. My preparation for this event was very intense with a lot of programs. I focused on being calm because I know I can do everything. I just have to be relaxed.”

Elene Gedevanishvili stayed in contention for a medal in fourth place at 57.14 points. The Georgian landed a triple Lutz-double toe, a triple Salchow, and got a level three for two spins in her Tango program.

“My performance was good, even though the practices didn’t go so well,” the 2010 European bronze medalist shared. “The program flowed very nicely. I couldn’t do a triple-triple combination, but that’s okay.”

“My preparation back in Canada was really good,” added the 22-year-old, “but when I got to the practice rink, it was strange (things didn’t go so well). Maybe it was jet lag. It was better at the main rink.”

Viktoria Helgesson of Sweden placed fifth at 55.68 points. The 23-year-old watered down her planned triple toe-triple toe to a shaky triple-double, but completed a triple loop, level-four footwork, and two level-four spins.

“I think my skate was OK, but I missed my triple toe in the combination,” noted the Swedish Champion commented. “I should have waited one more second before the jump. It came too quickly.”

Her younger sister, Joshi Helgesson, competes as well in the event and was even in the same warm up.

Viktoria Helgesson liked that: “It’s really good. We have so much fun when we’re not at the rink and I can relax more from the competition. I always have someone to talk to. We compete with each other at practice and support each other. I am so lucky to have her.”

Alena Leonova was one of the top medal contenders, but it appeared the pressure to skate last got to her. The two-time Russian national silver medalist stumbled on her triple toe-triple toe and the second jump was downgraded. The triple flip and double Axel were fine, but the flying sit spin garnered only a level one and the combo spin was a level two.

Leonova still has a shot at the podium in sixth with 54.50 points.

“The combination was underrotated,” observed the 21-year-old. “I knew right away that it would be downgraded. That wasn’t a surprise for me. However, I’m not sure why I got a level one for the flying sit spin and a level two for the combination spin. I felt I finished them the right way. I skated last and felt the pressure a bit.”

“Overall, it was a decent skate,” the Grand Prix Final bronze medalist explained.

Leonova remains optimistic for the free skating: “I just looked at the difference in points and it is not so big, so I think I have a chance to pull up. I will fight for it tomorrow, as always.”

Valentina Marchei of Italy came in seventh with a solid performance that featured a triple Lutz-double toe combination.

“I recovered from a bad injury that I got last year at Europeans, explained the three-time Italian national champion. “I took time off from skating from January till July, and I started by doing single jumps again. My programs were ready in the middle of September. Now I can say I’m back in shape and I’m happy I did it and dealt with the stress.”

“It’s been such a long time without any competitions for me,” concluded Marchei, “and today I just didn’t want the stress to take over. My goal here is not a result, not a number or placement, but just to skate two programs that I’m proud of. I’m ready to skate well in both programs.”

French Champion Yrétha Silété turned in a clean program to Black Swan that was highlighted by a triple toe-triple toe, triple loop, and double Axel to come in eighth.

“This was one of the best performances of the season in the short program,” said the 17-year-old. “I am very pleased with it, to have done the triple-triple (toe) combination. I had a little error on the flying sit spin, though.”

“I was very focused when I went on the ice,” added Silété, “determined to give it my very best, and I left the ice feeling satisfied with what I did. The atmosphere is really nice. There are quite a few noisy French fans in the audience. It is great to feel their support.”