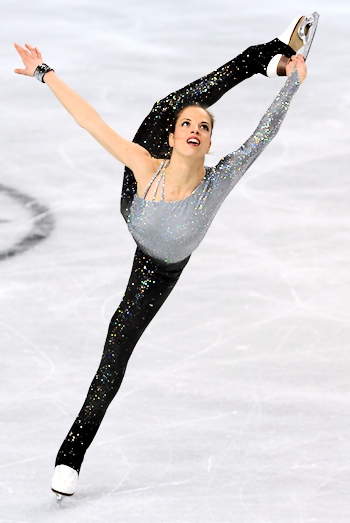 Carolina Kostner of Italy performs to Mozart's "Concerto No. 23" at the 2012 European Figure Skating Championships.

Kostner gave an inspiring performance of her exquisite program to Concerto No. 23 for Piano and Orchestra by Wolfgang Amadeus Mozart. She completed five solid triples, including a flip, and two level-four spins to score 120.33 points.

It was nice to see how she enjoyed her performance. Overall, the 24-year-old accumulated 183.55 points.

“I am very pleased with the whole week here,” said Kostner. “I had an awesome feeling on the ice, and just hearing the crowd cheer me on, it was amazing.”

“I completely canceled the pressure out of my mind,” continued the Italian. “I am looking for good performances, especially just for myself because this is my 10th European Championship. I’ve won it three times, and in those three times, I never had the chance to really enjoy it. That’s what I did this whole week and I’m very pleased with how it turned out.”

Korpi battled injury problems earlier in the season, but is on the comeback trail as she proved in Sheffield.

Skating to I Got Rhythm by George Gershwin, the Finn produced a somewhat shaky triple toe-triple toe, a triple Salchow-double toe, as well a difficult spins. However, there were also mistakes. She doubled the flip and made errors on the first Salchow and loop. She also did another loop that was discounted as she already had repeated the toe and Salchow.

The two-time European bronze medalist was lucky that it didn’t make a difference in the end. Korpi finished fourth in the free skating portion with 105.14 points, but remained in second place overall at 166.94 points.

When Korpi was asked about the repetition of the loop, she had to admit that she and her team didn’t know the rules too well.

“I did the program as it was planned, so there was a mistake in the planning of the program, which is of course a really big mistake by my team,” she explained. “But I’m really relieved that it didn’t affect the result. I was even more nervous after the performance than before because I had to wait for the results. In the future I just have to be more careful with the rules.”

Gedevanishvili’s routine to The Phantom of the Opera featured four triples and two double Axels, but she underrotated a triple Lutz. The Georgian earned 108.79 points and took the bronze with a total of 165.93 points.

“I think my performance was pretty good,” said the 22-year-old. “When I ended my performance, I was just happy that it was over and that I had been strong enough to hold my programs together. The most important thing for me is that after a long time I enjoyed skating again. I didn’t care if I was in fourth or in tenth place. I just enjoyed skating.”

“It is a small country but it’s huge for me and I love my country,” Gedevanishvili answered, when she was asked about coming from small East European Georgia. “When I represent my country and see my flag hanging up there, I feel very good.”

Russia’s Polina Korobeinikova, who stood in 12th after the short, rebounded with a strong free to Otonal. The elegant 15-year-old nailed seven triples, including a triple flip-triple toe, and scored 164.13 points to finish fourth in her debut at Europeans.

“For me the free skating is easier than the short,” said the Muscovite. “I am very happy with my skate. It was better than in the qualifying round, and the score was five points higher.”

Viktoria Helgesson of Sweden gave a solid performance to Sunset Boulevard, but she underrotated a triple Salchow and stumbled on a cheated triple flip. The audience cheered her on for each jump and booed when her score came up. She remained in fifth place overall (160.82).

“I felt good during my performance,” said the 23-year-old Swede. “I think I did a lot of right things. The crowd’s support was really important. I love to skate when the public is supporting like that. It’s so much fun.”

“After this competition, I will work with my coach and try to improve my programs,” added Helgesson.

Russia’s Ksenia Makarova once again struggled with underrotated jumps in her free skating, and dropped from third to sixth (159.59).

“I’m disappointed to be honest,” said the former Russian national champ. “I want to skate how I’ve skated in practices, but I’m human and I’m learning from my mistakes. I don’t know what the problem is. I have to just go out there and do it. I have a little ‘stopper’ that holds me back.”

“Worlds are two months away and there’s plenty of time to get rid of that ‘stopper’,” the 19-year-old vowed.

Teammate Alena Leonova fell hard on a triple Lutz and hurt her knee. She also singled an Axel and placed seventh overall.

“I hurt my (left) knee badly on the fall on the triple Lutz,” said the Russian bronze medalist. “It hurt so much that I wanted to stop, but then I decided to push through.”

Italy’s Valentina Marchei missed a Lutz and a toeloop and also underrotated at Salchow to finish eighth.

“I’m proud because my skating is improving,” said the 25-year-old. “Compared to the beginning of the season, it’s way improved. Maybe I was pretending too much for myself and thought that I was really ready. I’m probably physically ready but not really into it yet. I still need to work on that.”